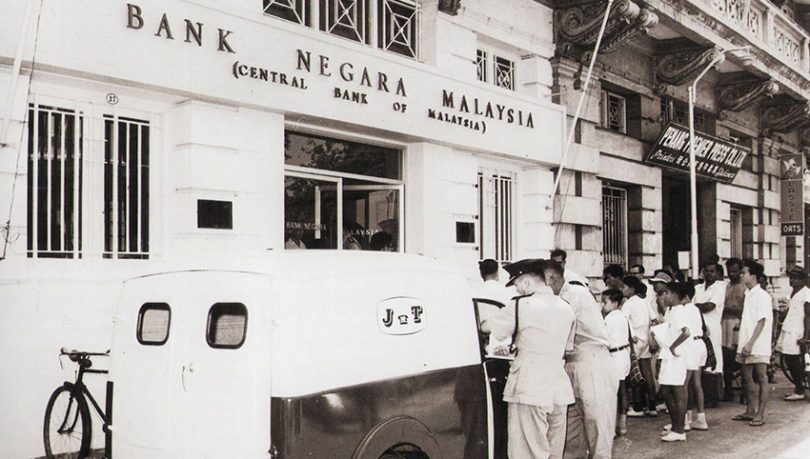 COVID-19 has brought a drastic change to us as rakyat were “forced” to fully utilise online and digital banking. It pushed banking digitalisation earlier than expected although most of us were not ready and had different views on online banking per se.

We must admit that it does bring a positive impact as more people are aware of other services provided by financial institutions, rather than just the basic savings and current accounts, fixed deposit and credit card services.

While Malaysians have had access to online banking for years now, there is still a need for physical banks as not all financial transactions are available online.

As such, let’s walk down memory lane of Malaysia’s banking history. According to Bank Negara Malaysia’s (BNM) 2012 Development of The Financial Sector report, the oldest bank established in Malaysia was a foreign bank. It fulfilled the financial requirements of the early European traders. Sometime in the 19th century, the British empire had already extended its authority over Penang, Melaka and Singapore due to their strategic locations.

Back then, merchants regularly made business stops along these three key states, which soon blossomed into a highly sought-after trading capital in the region.

Eventually, as part of the British’s effort to diversify the resources and income, they welcomed the Chinese and Indians to this region and capitalised on the high demand for natural resources such as rubber and tin.

Consequently, among the first banks that penetrated the region was Mercantile Bank, followed by Chartered Bank.

It was later changed to the Mercantile Bank Ltd when it lost its Charter in 1892.

In 1959, the Mercantile Bank became a wholly owned subsidiary of the Hongkong and Shanghai Banking Corp (HSBC) and was integrated under the banner of HSBC in January 1974.

Retrospectively, international trade finance was historically the main interest of the banks, but it declined after Malayan’s independence in 1957 which focused on the growth and broadening of the Malayan economy.

Even before the independence, many local banks started to mushroom such as Hong Leong Bank Bhd (formerly known as Kwong Lee Mortgage & Remittance Co) in 1907 and Kwong Yik (Selangor) Banking Corp in 1913.

The emergence of local banks and the establishment of BNM as Malaya’s central bank in 1959 changed the involvement of the British banks with the local economy.

The countr y’s first local bank was established almost 30 years ago when Allied Bank (later renamed to PhileoAllied Bank) began operating as a Malaysian-owned bank in 1994. It was after the culmination of a process that began about a year earlier. Phileo began the process in August 1993 by acquiring Linatex Process Rubber Bhd from Harrisons & Crosfield plc.

Before the renamed, it had acquired Petra Finance and Phileo Peregrine Securities, UOB Bank (M) and took over the ailing Co-operative Central Bank, which had a deficit of RM600 million.

Subsequently, in June 1992, PhileoAllied launched PALDIRECT, the first online platform that enabled stock trading transactions, payments and the execution of other banking services.

The dawn of digital banking in Malaysia stands to not just disrupt the country’s financial and banking industries, but also jumpstart other fintech and digital payment companies in the same ecosystem.

PALDIRECT later developed a web-based option that was made accessible on computers, a precursor to online trading that other banks eventually adopted.

To better serve its customers, the bank gave a trading rebate of up to 20% that would go towards brokers’ fees, leading to a battle between the bank and the Kuala Lumpur Stock Exchange.

Using the PALDIRECT template, Phileo then launched PALWORLD in August 1996, offering the same range of services as its predecessor but with additional features such as electronic shopping.

A month after PALWORLD, oneACCOUNT was launched. It combined the features of both current and savings accounts and introduced interest rates of a fixed deposit account.

Fast forward to the present time, physical banks are slowly evolving into digital banks by offering the public almost all the banking and financial services online, without the need for traditional branches.

It transformed the banking and investment platform into a consumer platform, offering online shopping, airline ticketing, insurance sales and others.

Eventually, more additions were made and turned into “lifestyle banking” via partnerships with various merchants and traders, allowing more online trans- actions to be conducted almost everywhere.

Despite all the past challenges in the banking industry, together with the traditional banks, it holds great potential to further strengthen the resilience of the country’s banking system in the new digital finance era.