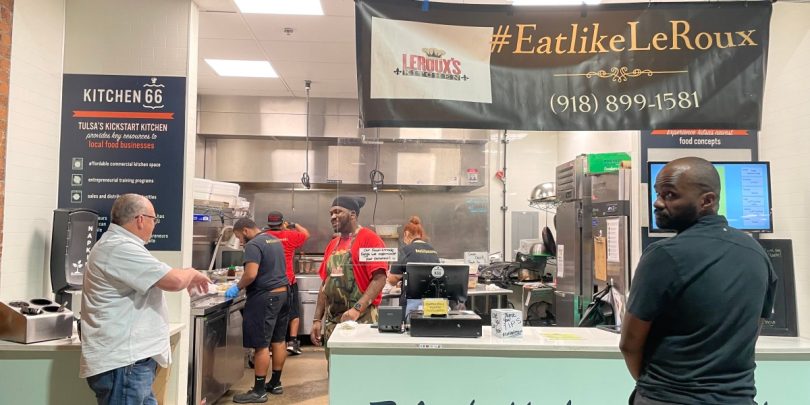 The macaroni and cheese comes in a little brown box, topped with finely chopped chives. A creamy, rich sauce. Shrimp and bacon. Now that is decadent.

“People talk about knowing love when you see it. I want to make people know love when they taste it,” Renauld Porter tells me, grinning, as we stand in front of his Creole-style temporary kitchen in the corner of Tulsa’s Mother Road Market food hall.

Porter, who moved to Tulsa from New Orleans 21 years ago, and his three-person team were in coveted real estate yesterday within the Food Hall—the Kitchen 66 Takeover Cafe. Every day, this food stall is handed off to a different food entrepreneur, so they can test new concepts with customers. On average, the vendor in this stall will make around $3,000 in sales from open to close.

Renauld Porter, a graduate of the Kitchen 66 incubator, chats with a customer outside his Creole-style food popup in Mother Road Market.

The Takeover Cafe is part of a larger food entrepreneurship initiative within the city of Tulsa. Kitchen 66, a program backed by the Lobeck Taylor Family Foundation, offers an education incubator to 20 entrepreneurs each year and rents out affordable kitchen space, food stalls, and store shelf space for individuals looking to try out new concepts.

Porter himself is a graduate of Kitchen 66’s spring incubator program—and his LeRoux’s Kitchen, which features macaroni and cheese, honey jalapeño chicken and fish, gumbo, and cobbler, is one of the top selling vendors in the Takeover Cafe, according to KateLynn Dunning, program director of Kitchen 66.

“One of our main economic drivers in Tulsa from a grassroots and ground floor development standpoint were food entrepreneurs,” Zakerion says. At the same time, there wasn’t much opportunity available for them to hone in and develop their businesses.

Each year, Kitchen 66 has two cohorts of 10 food entrepreneurs—including aspiring restaurateurs, food truck chefs, catering businesses, or someone wanting to put their family’s salsa or spice blend on retail shelves. Entrepreneurs learn the ins and outs of launching their own business. A few years into the program, the Kitchen 66 staff realized that—while there was no lack of food ideas—people had no place to pilot their ideas. The Lobeck Taylor Foundation invested $5.5 million into building Mother Road Market, which includes a food hall, the pop-up cafe and food truck, shelf space for consumer packaged goods, a space for classes complete with food blogging technology, and a 2,800 square foot commercial kitchen where individuals can rent out kitchen prep stations, cooking stations, or storage space starting at $10 a day. There is also Route 66-themed mini golf in the outdoor area.

The foot traffic is heavy—with about 5,000 people coming through the food hall a week, with $128,761 in weekly food and bar sales. The idea behind Kitchen 66 is that the businesses will grow beyond Mother Road Market and be able to open their own restaurants or start selling their product elsewhere. (In the case of the Kitchen 66 food truck, Dunning says success may also look like a person realizing they despise working in a food truck prior to them putting down the money to purchase one.)

Since 2016, more than two dozen Kitchen 66 businesses have opened up brick and mortar stores, food truck operations or supply consumer packaged goods to local businesses, according to Kitchen 66—including Big Dipper, Pamela’s Tamales, and Que Gust, which have all gone on to open stores.

Much of the food coming out of the Kitchen 66 incubator program is ethnically diverse—and so are many of the food entrepreneurs that are making it. In total, about 150 food businesses run by individuals representing 20 different countries have participated in the program (118 of which have graduated from it). About half of those are women. Kitchen 66 is currently piloting Cocina 66, a Spanish-speaking version of the incubator program.

By the time I left Mother Road Market yesterday, there was a long line for LeRoux’s Kitchen. “It’s well worth the wait,” one customer told me.

And I’m back… The last two years have delivered record venture funding to startups being founded outside the Coasts—which is one of the reasons I decided to drive over to Tulsa, a city nearby where I’ve noticed escalating early-stage activity, and try out something new for Term Sheet. Thanks for following along, and you can expect the normal programming of this newsletter again starting tomorrow.

– Zesty, a Tel Aviv, Israel-based cloud infrastructure solutions provider, raised $75 million in Series B funding. B Capital and Sapphire Ventures co-led the round and were joined by investors including Next47 and S-Capital.

– Podimo, a Copenhagen, Denmark-based podcast and audiobooks subscription service, raised €58.6 million ($58.56 million) in funding. 83North, Highland Europe, and Saban Ventures led the round and were joined by investors including Chr. Augustinus Fabrikker, Heartcore, and Headline.

– Devialet, a Paris, France-based audio engineering company, raised €50 million ($50 million) in funding. Crédit Mutuel Equity, Bpifrance, and others invested in the round.

– Dig, a Tel Aviv, Israel-based cloud data security company, raised $34 million in Series A funding. SignalFire led the round and was joined by investors including Felicis, Okta Ventures, and other angels.

– Diamond Standard, a New York-based diamond commodities company, raised $30 million in funding. Left Lane Capital and Horizon Kinetics led the round and were joined by investors including Gaingels and Republic.co.

– Denim, a remote-based financial enablement platform for the freight and logistics industry, raised $26 million in Series B funding led by Pelion Venture Partners.

– NYSHEX, a New York-based ocean freight contract technology provider, raised $25 million in Series B funding. Collate Capital led the round and was joined by investors including Blumberg Capital, Goldman Sachs, and NewRoad Capital.

– TruckSmarter, a San Francisco-based marketplace for truck drivers, raised $25 million in Series B funding. Thrive Capital led the round and was joined by investors including Founders Fund, a16z, Bain Capital Ventures, and Fin Capital.

– CANDIS, a Berlin-based software solutions company for automating accounts payable processes, raised $16 million in funding. Viola FinTech led the round and was joined by investors including Lightspeed and Viola Ventures.

– Chameleon, a San Francisco-based product adoption platform for software companies, raised $13 million in Series A funding. Matrix Partners led the round and was joined by investors including True Ventures and other angels.

– Composer Technologies, a Toronto, Canada-based automated investing platform, raised an additional $6 million in funding. Left Lane Capital led the round and was joined by investors including First Round Capital, AVG Basecamp, Draft Ventures, and Not Boring Capital.

– Valve, a London and New York-based sales, marketing, and distribution solutions provider for commercial real estate professionals, online booking platforms, and workspace operators, raised $4.5 million in seed funding. Project A led the round and was joined by Discovery Ventures.

– Bloom Community, an Oakland, Calif.-based events and connections app for LGBTQ and other communities, raised $2.5 million in seed funding led by Tuesday Capital.

– Apollomics, a Foster City, Calif.-based cancer drugmaker, agreed to go public via a merger with Maxpro Capital Acquisition Corp., a SPAC. A deal would value the company at $1 billion.