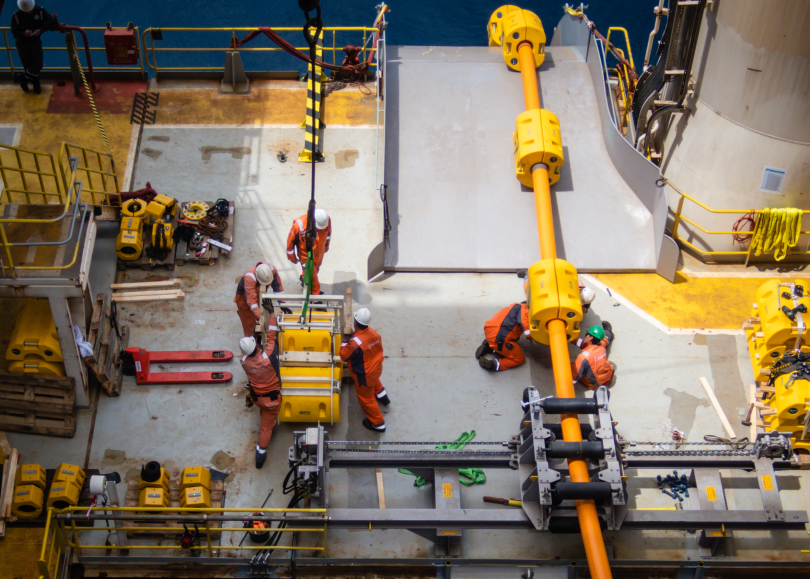 The Metals Company and Allseas have announced the successful deepwater commissioning of its riser pipe and jumper hose. These tools are designed to lift polymetallic nodules from the seafloor to the surface. The nodules typically fit inside the palm of your hand (they sent me one in 2020 as a sample back when they were known as Deep Green Metals).

These nodules will help relieve some of the supply chain stress of EV battery critical materials since they have a lot of the necessary materials in them. The successful trials herald good news for the industry.

The company said that engineers aboard the Hidden Gem vessel deployed the jumper hose and were able to connect it to the base of the rise. Next, the engineers launched the pilot riser and lowered the assembly to a depth of around 650 meters.

With the aid of a remotely operated vehicle (ROV) installed on the Hidden Gem, the engineers were able to make a sub-sea connection between the jumper hose and the collector vehicle that had been deployed to the seafloor at a depth of 745 meters.

Once the sub-sea connection was made, Allseas then used a derrick that was previously used for at-sea construction of the pilot riser system that extends to 4 kilometers deep. There are plans to deploy it later this year in the Clarion Clipperton Zone (CCZ) of the Pacific Ocean.

CEO and Chairman of the Metals Company Gerard Barron said in a statement, “Straight off the back of our collector trials, Allseas have once again shown why nobody else in the offshore business can think as big, or move as fast, With the first deep-water deployment of the riser system and subsea connection between the collector and the riser successfully under our belts, we look forward to applying the lessons learned as we hook up and deploy the prototype collection system in the Pacific later this year.”

Some Background On Allseas & The Metals Company

The two companies have been working together since 2019 to develop a pilot system that will collect polymetallic nodules from the seafloor. These nodules are not attached to anything — they are just lying there on the seabed. The pilot system will lift them to the surface.

These nodules have high grades of nickel, manganese, copper, and cobalt, which are key for building EV batteries and other renewable energy technologies. The Metals Company noted that the development of technologies to collect polymetallic nodules started in the 1970s when oil, gas, and mining companies such as Shell and Sumitomo were able to successfully conduct a pilot test in the CCZ. They collected over 10,000 tons of nodules.

Since then, the International Seabed Authority was established to create a regulatory framework that would govern mineral extraction in the open seas. Technology has also been developing rapidly, with a large focus on collecting the nodules with minimal seafloor disturbance and environmental impact.

Two Letters About The Nodules

I’ve written about this before, but I want to quickly recap and highlight the importance of these nodules. There were two letters that are important. One was from Senator Murkowski to the U.S. Secretary of Energy, Jennifer Granholm, who brought up a report that the DOE released to President Biden identifying risks in the high-capacity battery supply chain.

“U.S. strategy should be focused on securing access to battery raw materials, supporting growth of domestic materials-processing base, and public-private partnerships. Collection of polymetallic nodules and subsequent processing in the U.S. can support these objectives.”

The second letter was written to the U.S. Secretary of Defense, Lloyd J. Austin III, and signed by 17 admirals, generals, and officers. In that letter, the group said:

“Given EVs and wind farms require some six and nine times more critical minerals than traditional technologies they might displace, respectively, and defense systems increasingly rely on critical and rare earth minerals, the need for the United States to develop domestic mineral supplies is clear.”

You can read those letters here.

Have a tip for CleanTechnica, want to advertise, or want to suggest a guest for our CleanTech Talk podcast? Contact us here.