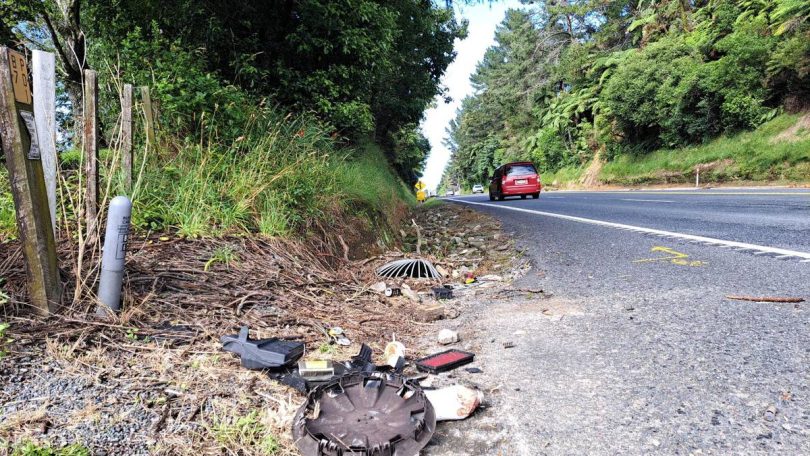 Some of debris and car parts left behind after a wrecked car which had been parked just inside the fog line on State Highway 29 for two weeks was removed. Photo / Sandra Conchie

A “concerning” rise in cars abandoned on Western Bay of Plenty roads is frustrating authorities, motorists and residents who fear the “eyesore” wrecks could cause an accident.

More than 180 abandoned vehicles were removed from
district roads and state highways in the past year, roading authorities reported.

The Western Bay of Plenty District Council was concerned “more and more vehicles” were being abandoned each year, including 18 in the past two weeks.

Have your say by going to bayofplentytimes.co.nz and becoming a Premium subscriber.

Please make car insurance compulsory like it is in many other countries.

There are damaged cars littering the streets in Auckland.

Who pays for their removal if there is no insurance and the owner cannot afford to have them taken to the wreckers?

If people cannot afford at least third-party insurance, they should not own a car. After that, we need police patrolling our roads – they are few and far between these days. They should be checking WOFs, registration and licence details on a regular basis.

Decades ago in England (and possibly not now), you could advise the council of a dead car, pay two quid and they took it away. Commercial opportunity? Or how about the piratical tow-truckies being paid to tow away dead cars?

In Auckland, cars don’t need to be dumped like that. There are any number of wreckers and car body removal firms that will pay cash for wrecks.

I got $250 for a removal several years ago. It could be more than that now. It must be stolen stuff being dumped.

All this stupid bureaucracy hindering removal of these roadside hazards.

Check the rego, tow the car, charge the owner or insurance company. It shouldn’t take weeks to do this.

And ratepayers shouldn’t be paying for tow or storage fees.

Our ‘clean and green’ image takes another hit.

Abandoned cars complement our city beaches, too polluted with human excrement to be safe for swimming.

Our native flora is being ravaged by dieback disease, closing most of our bush walking tracks. Our rivers and creeks have high nutrient and animal pollution [levels] caused by runoff, making them unsafe.

The shellfish on our beaches is not fit for human consumption because of marine contamination.

Tourists that arrive here expecting a ‘clean and green’ country must be pretty disappointed when they actually learn that NZ is far from being what the advertising slogan suggests.

Just another example of the rapid deterioration of New Zealand society.

No-one takes responsibility and it’s always someone else’s problem: the owner, the council, the police, the NZTA.

– Republished comments may be edited at the editor’s discretion.

The Bay of Plenty Times welcomes letters from readers. Please note the following: