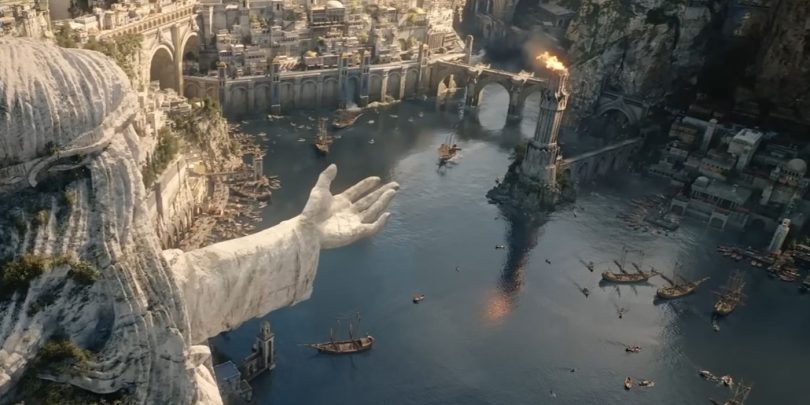 After three episodes of Prime Video’s hit series The Lord of the Rings: The Rings of Power, the Elven warrior Galadriel (Morfydd Clark) and the mysterious Halbrand (Charlie Vickers) have finally set their eyes on the island kingdom of Númenor. To see this mythical realm from J.R.R. Tolkien‘s legendarium has been a dream of many fans of the professor’s work, and there’s no doubt that Prime Video has (so far) done it justice. Between the breathtaking visuals and the rich characters that inhabit the capital city, fans of The Rings of Power are certainly in for a treat as the show continues.

Taking cues from the biblical Fall of Men, the destruction of Sodom and Gomorrah, and the legend of Atlantis, Tolkien wrote the Kingdom of Númenor as a turning point in Middle-earth history, and a tragic tale of hubris. As we see on the world map in The Rings of Power, this island kingdom was located far westward off the coast of Middle-earth, deep in the center of the Great Sea. Although the Prime Video series may take a different approach to the story of Númenor than Tolkien’s legendarium, understanding what he wrote about the famed Kingdom of Men may help us anticipate whatever comes next.

COLLIDER VIDEO OF THE DAY

A Gift from Above

The First Age of Middle-earth ended with a battle between the Dark Lord Morgoth and the united armies of Elves and Men, with some assistance from the Valar — spirit beings subservient to the “One God” Eru Ilúvatar who chose to dwell with creation. As a reward for their faithfulness, the Valar blessed this group of Men, known as the Edain, with an island realm that they raised up from the Great Sea. From above, this island, known as Elenna, Westernessë, or “The Land of Gift,” was shaped almost like a five-pointed star, and it would take the Edain nearly 50 years to migrate there.

RELATED: ‘The Rings of Power’ and the History of Romance Between Elves and Humans

The first High King of Númenor was Elros, the half-Elven brother of Elrond (Robert Aramayo) who, after being given a choice by the Valar, chose to be Man-kind. As a mortal, albeit one with an extended lifespan, Elros ruled Númenor for 410 years, eventually passing the throne down throughout generations to the kingdom’s final rulers, namely the Queen Tar-Míriel (Cynthia Addai-Robinson), who was the last rightful heir to the throne. According to Tolkien’s work, the throne would eventually be usurped by her cousin Ar-Pharazôn (Trystan Gravelle), the last King of Númenor, who would marry her against her will.

A Slow Descent into Darkness

Although the Kingdom of Númenor excelled for over a thousand years, the Númenóreans slowly grew discontented with their mortality. Though they initially held peaceful relations with the Elves, and for centuries maintained a strong bond with the Elven High King Gil-galad (Benjamin Walker), they began to resent the other race for their immortality, something that Men could never have. When their island kingdom was raised from the Great Sea, the Valar banned the Númenóreans from sailing into the far west, where they might reach the Undying Lands and possibly gain immortality.

According to The Silmarillion, the Númenóreans eventually began to expand their maritime empire, forcibly colonizing lands of Middle-earth. Before long, Sauron corrupted Ar-Pharazôn, promising eternal life if Númenor would only worship and pledge their allegiance to his own vile master, Morgoth. The majority of the Númenóreans would do this, erecting temples for human sacrifices to the original Dark Lord that plunged the once great Kingdom of Men into further darkness. During this time, Ar-Pharazôn built up their armada with hopes of waging war on the Valar in the West.

The Downfall of Númenor

Once the Númenóreans broke the Valar’s ban, all bets were off for the island kingdom. Although most of Númenor engaged in Morgoth worship at this point (which is akin to Devil worship in Tolkien’s world), there was still a remnant of Men still loyal to the ways of Eru Ilúvatar, the Valar, and the Elves. This group of Men was known as “the Faithful,” or the Elendili, named after their leader Elendil (Lloyd Owen), himself a descendant of the first High King Elros. Eventually, Elendil led a group of Númenóreans to Middle-Earth and founded the kingdoms of Gondor and Arnor.

Despite this remnant, The Silmarillion explains that the Númenóreans went on to wage war against the Valar, who in turn called upon Eru Ilúvatar to intervene. In response, Eru changed the world of Arda from a flat one to a globe. That’s right, throughout most of the Second Age, Tolkien’s high fantasy world was actually a flat earth! This re-construction of the world, which also removed the Undying Lands from the material plane, led to the complete and utter destruction of Númenor. Even Sauron himself was affected by Eru’s intervention, which destroyed his body and sent his spirit back to the dark lands of Mordor where he would regain his strength.

The Faithful Live On

Long after Númenor fell, Sauron would rise up again in the Third Age to try and take over Middle-Earth during the War of the Ring, as told in The Lord of the Rings. Though Elendil’s son Isildur (played by Maxim Baldry in The Rings of Power) defeated Sauron in the Second Age (and took the One Ring for himself), it would be Isildur’s heir, Aragorn, who would serve as the true threat to the Dark Lord’s empire in the Third. Aragorn himself descended from a group of Men called the Dúnedain, exiled Númenóreans who spread throughout Middle-Earth throughout the Second and Third Ages, giving him a particularly long lifespan, and the only true claim to the throne of Gondor.

The Dúnedain would eventually split into two factions, one side to Gondor and the other to Arnor, though they’d be reunited when Aragorn took the throne at the end of The Return of the King. Because of his relation to the half-Elven Elros, the first King of Númenor, Aragorn would live much longer than the average Man in Middle-Earth, which explains how he could be in his late 80s during the events of The Lord of the Rings. Although he wouldn’t live as long as his half-Elven ancestor, Aragorn lived to be 210 years old due to his Dúnedain heritage and carried all the hopes of what Númenor could have been with him.

The first three episodes of The Lord of the Rings: The Rings of Power are streaming now on Prime Video. New episodes become available every Friday.