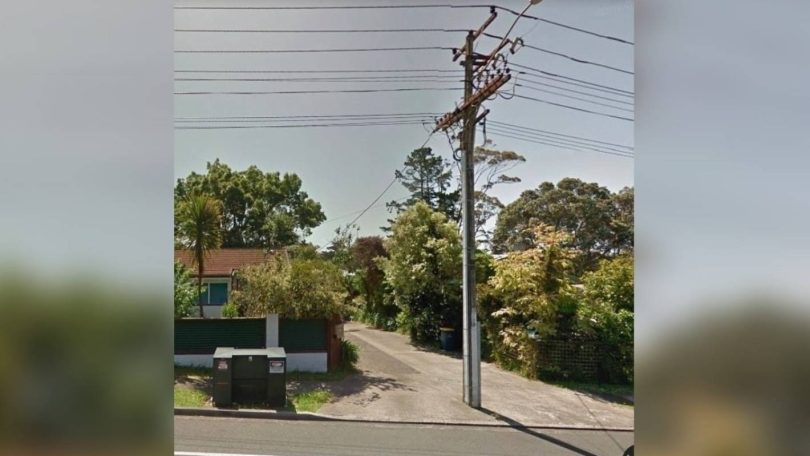 A street light sealed in the middle of a brand-new road has caused a stir in a small North Canterbury town.

The rouge street light has become a minor attraction for Pegasus residents, and even the council say they’re surprised to see it there.

Got something weird on your street? Send photos and email Stuff at newstips@stuff.co.nz

This isn’t the first time some strange road construction has caused a bit of disruption.

READ MORE:
* Lamp post in middle of a newly sealed road a surprise to neighbours – and council
* The struggle of charging your EV when your house has no driveway
* ‘Stupid solution to a stupid problem’: Council paves around problem traffic cameras

Let’s take a look at some of the weirdest obstacles, and straight-up mistakes, on New Zealand’s roads and footpaths.

In the Auckland suburb of Henderson, one particular power pole is placed directly in front of a driveway.

A resident who lives down the driveway told Stuff that multiple wing mirrors have been ripped off by the pole, and its even managed to do some damage to the rear bumper of a Countdown delivery van.

Tāmaki Makarau seems to be a particular hotspot for footpath obstructions – in April, Auckland Transport announced it would widen footpaths on a North Shore street to accommodate 17 poles with 68 cameras placed on the paths.

And in March, Auckland councillor Desley Simpson shared this image on Facebook of a wooden pole – right in the centre of a footpath on Patterson Ave in Mission Bay.

“Some days I am simply lost for words,” Simpson captioned the photo.

A Stuff reader sent in these photos of street lights directly in the middle of a newly-sealed shared pathway on Maunganui Rd, Mount Maunganui.

Further South in Christchurch, a Stuff reader took this photo of a short pole they encountered while walking down a footpath on Hewitts Rd.

In 2015, a cycle lane sign turned up on the side of Aka Aka Rd in the Waikato, on a verge separating a waterway and the road.

“Maybe the bikes need a mower attachment!” a nearby resident joked on a local Facebook group.

The sign was promptly removed by the Waikato District Council, who confirmed its installation was a mistake.