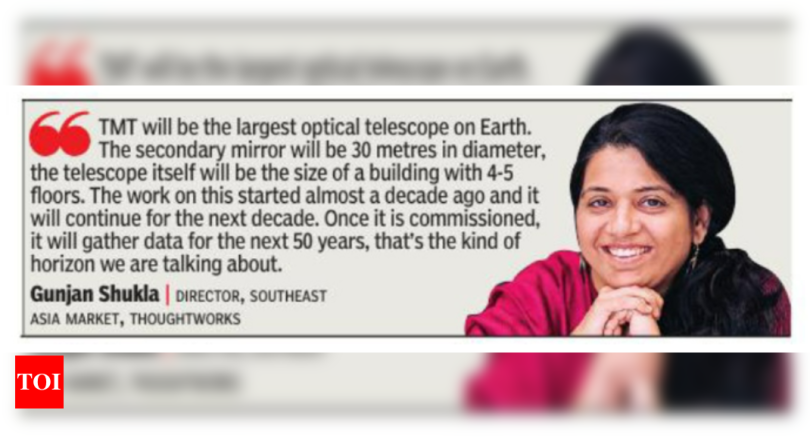 Nestled in a high-rise in the northeast of Pune are a group of techies who are busy designing software for a global project to build the world’s largest optical telescope. They are part of the tech consultancy firm Thoughtworks. The software they are working on will help all of us eventually better understand the cosmos.
Gunjan Shukla, director of Southeast Asia for Thoughtworks, says the project, called the Thirty Metre Telescope (TMT), is so ambitious that it won’t be completed for another decade and involves a plethora of stakeholders, from American universities like Caltech and the University of California, to the Chinese Academy of Sciences and the Department of Science and Technology in India. The Thoughtworks team works closely with the TMT project office in Pasadena in California and the Indian Institute of Astrophysics in Bengaluru.

Gunjan’s team was given three work orders from the non-profit that oversees the TMT project. The first is what they call ‘common software.’ “It is essentially the entire software that is needed to operate the telescope. You can think about this as sort of a communications network and the brain of the telescope, giving instructions,” Gunjan says.
Then there is the ‘executive software’, which is what the scientists will use. This deals with the commands that scientists give and how that is to be interpreted and translated into something that the operating system of the telescope can understand and execute.

The third work order deals with the ‘data management system’, which deals with processing all the data and images that the telescope will eventually capture. “We are talking about data in terabytes and petabytes. It is humanly impossible to go through that data and parse out the patterns emerging out of what you are capturing. So you need software,” Gunjan says.
Nowadays, Gunjan says, good software equates to good science. It has become so critical that if your software goes wrong, your science will go wrong.
The team has followed the first principles of good software engineering: do test driven development, write clean code, and develop micro services. “Above all, you need passion to solve such large-scale engineering problems,” she says.
The Thoughtworks team’s part in the TMT project will be completed in 3-4 years. The first two components are done, the design phase of the third component is over and its construction phase has started. The telescope, Gunjan says, is being built in parallel.