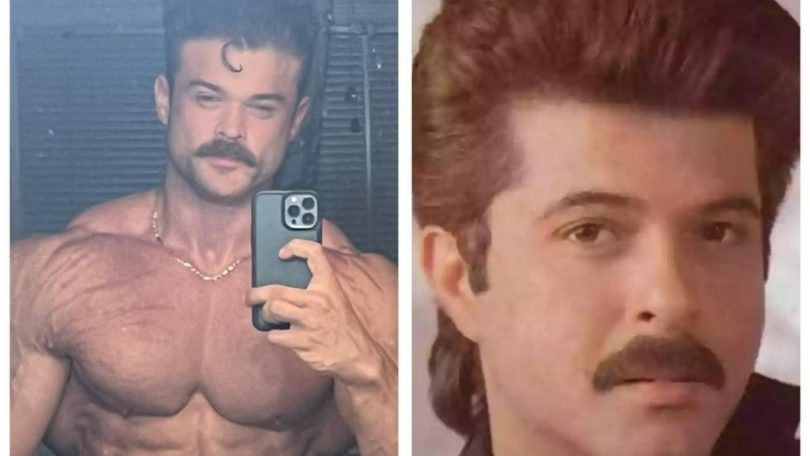 Anil Kapoor is one popular man. The actor, who was recently seen in Karan Johar’s Dharma Productions’ ‘Jug Jugg Jeeyo’, enjoys a massive fan-following, not just in India, but globally. Recently, pictures of a man who possesses an uncanny resemblance to the ‘Mr India’ star went viral on social media.

John Effer, a US-based fitness coach, recently took to his Instagram account to post a picture collage of himself and Anil Kapoor. As soon as he shared the post, the image went viral on social media.

In the picture, John can be seen sharing a near-similar look compared to Anil Kapoor’s signature mustache look from the 90s. In addition, John even went on to flaunt his ripped body in a mirror selfie.

Along with the picture, John wrote a caption, “I’m waiting on that Bollywood call TBH Where is it at!!?? @anilskapoor Kids a great actor – my dad says so.” Take a look at his post:

Netizens went berserk finding the uncanny resemblance of the fitness coach and the Bollywood star. Flooding the comments sections with their reactions, one user wrote, “i literally thought you were anil kapoor.” Another wrote, “If Anil Kapoor visited gym in the 90s… Wallahi.”

“This anil kapoor guy dosnt age bro he looks the same even now at 60 lol,” read one comment. “Mr @anilskapoor is that you,” read another.

Fans have been eagerly eyeing for Anil Kapoor’s reaction, who has not yet seen John Effer’s post.

Meanwhile, on the work front, Anil Kapoor, was last seen in ‘Jug Jugg Jeeyo’. The film starred Varun Dhawan, Kiara Advani and Neetu Kapoor in the leads and was a box-office success. He will soon be seen in Hrithik Roshan and Deepika Padukone’s action-drama film, ‘Fighter’, which is being helmed by Siddharth Anand.