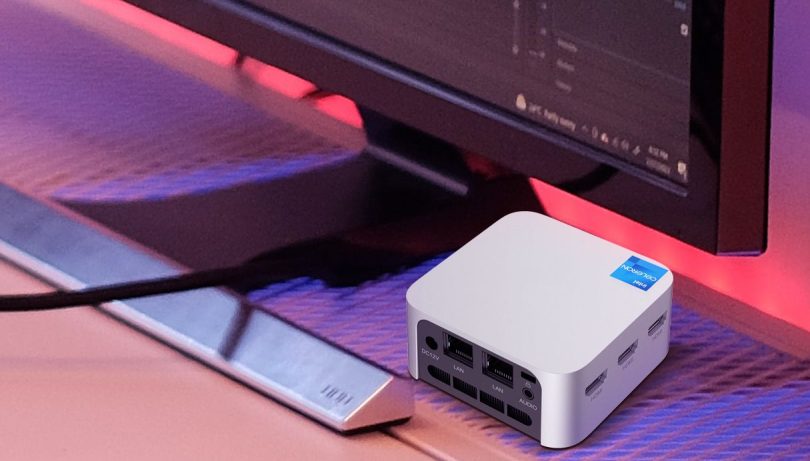 Disclosure: Some links on this page are monetized by the Skimlinks, Amazon, Rakuten Advertising, and eBay, affiliate programs. All prices are subject to change, and this article only reflects the prices available at time of publication.

The Gateway Mini PC T8-Pro is a tiny desktop computer that packs a lot of features into a 3.5″ x 3.5″ x 1.7″ body. It supports up to three 4K displays. With Dual Gigabit Ethernet jacks, you can connect it to multiple networking devices or use it as a router or firewall.

While the T8-Pro isn’t the most powerful computer in this size, it is one of the cheapest I’ve seen so far. The Gateway T8-Pro is available from AliExpress for $145 and up.

The starting price is for a model with 8GB of LPDDR4X memory and a 128GB M.2 2242 SSD, but you can also pay extra for a configuration with up to 1TB of storage.

According to the product page, the computer also supports up to 16GB of RAM, but there’s currently no option to buy a model with that much memory. And since the RAM is not user upgradeable, it’s probably best to think of this as an 8GB device for now.

The system is powered by an Intel Celeron N5095 processor, which is a 15-watt quad-core chip based on Intel Jasper Lake architecture.

The T8-Pro features three HDMI 2.0 ports, two Gigabit Ethernet ports, a 3.5mm audio jack and three USB 3.1 Type-A ports plus a DC power input. It weighs just 204 grams (less than half a pound), and should be easy to mount to the back of a TV or monitor, hide under a desk, or unplug and throw in your bag (or even your pocket) to take with you from home to work or vice versa.

It uspports WiFi 5 and Bluetooth 4.2 wireless connectivity, and the T8-Pro features a fan for active cooling, so don’t expect totally silent operation.

The similarly-sized SZBOX GK packs a little more performance into a slightly smaller design, thanks to an Intel Celeron N5105 Jasper Lake processor (with better graphics), but that model has a starting price of $159. And the GMK NucBox 7 has an even better Intel Pentium N6005 processor plus 16GB of RAM. But it sells for $300.

I wouldn’t pay too much attention to the Gateway branding on this computer. Gateway was an American computer company that was acquired by Acer in 2007. A few years ago Acer signed a deal with Chinese PC maker Bmorn to build and sell Gateway-branded laptops for Walmart. But it’s not clear to me whether the T8-Pro has anything to do with Acer, Bmorn, or anybody else involved with the Gateway brand.

Liliputing’s primary sources of revenue are advertising and affiliate links (if you click the “Shop” button at the top of the page and buy something on Amazon, for example, we’ll get a small commission).

But there are several ways you can support the site directly even if you’re using an ad blocker* and hate online shopping.

Contribute to our Patreon campaign

* If you are using an ad blocker like uBlock Origin and seeing a pop-up message at the bottom of the screen, we have a guide that may help you disable it.