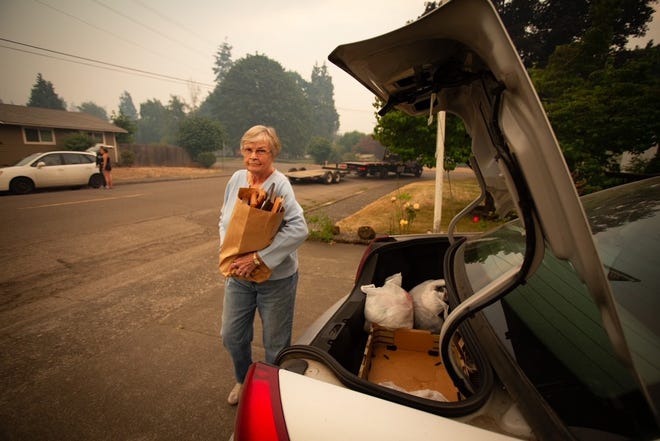 Thousands of Lane County residents are without power this weekend after utilities shut off their electricity in anticipation of high winds that have the potential to knock over powerlines and start more wildfires.

The Eugene Water & Electric Board and the Lane Electric Cooperative both shut off electricity to many customers starting Friday, some as early as 1 p.m. The Springfield Utility Board does not have plans to shut off power, but is monitoring and preparing for the weather, according to their website.

EWEB shut off power to about 3,000 customers from Hayden Bridge to Vida. As of Saturday morning, the company did not expect to increase that number and anticipates restoring power Sunday afternoon.

As of Saturday morning, Lane Electric Cooperative shut off power to 2,369 households, about 18% of its customers. The company shut off power to some at 1 p.m. Friday, four hours earlier than originally planed.

“That was an action we took to mitigate the wildfire risk,” EWEB spokesperson Aaron Orlowski. “Obviously, it was a tough decision, but we wanted to make sure that we reduce that risk as much as possible.”

On Saturday afternoon Lane Electric began restoring power to households. Members in Westfir and High Prairie, outside of Oakridge remain without power, at the direction of Cedar Creek wildfire response command. Oakridge’s power was on and will remain so unless Lane Electric gets directed otherwise by emergency management.

Mutual aid crews have been called in to help in restoration. The process will continue through the day, and potentially into Sunday given current conditions.

Restoration in the McKenzie area would also be be delayed as it requires coordination with Bonneville Power Administration, who also deenergized lines in the area as a precaution.

EWEB may restore power sooner or later depending on weather conditions, Orlowski said. Before re-energizing, EWEB crews will patrol lines and remove debris, make repairs if needed and will respond to emergency reports of lines down or other damage to the power system, according to a news release. Once that work is complete, EWEB will restore service. Restoration is anticipated to take longer than typical.

Important items to have ready during power outages include:

Residents needing emergency information due to wildfires or outages can get it by dialing 2-1-1. A non-emergency call center is available at 541-682-3977. Call takers are available from 7 a.m. to 7 p.m.

Lane County is directing residents to respite centers if they need to escape poor conditions at their own homes. The centers can provide food, water, shelter from heat and smoke, as well as filtered air.

Large Animals and livestock: Oakridge-area residents under an evacuation notification can bring their large animals and livestock to the horse arena at Lane Events Center, located at 796 W. 13th Ave. in Eugene, if they have no other option for their animals. People must call or text Lane County Animal Services at 541-285-8227 before arriving or leave a message if the call is missed.