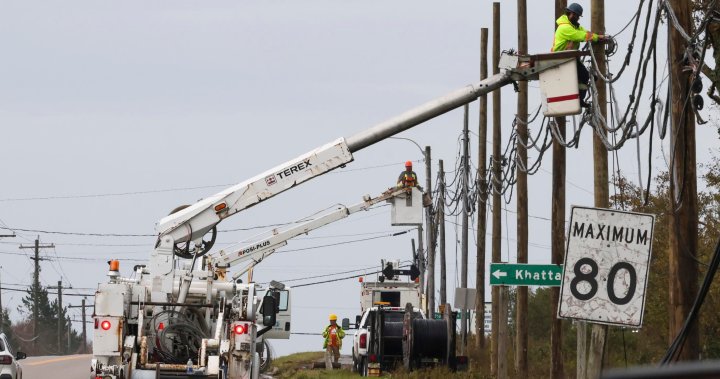 Tens of thousands of homes and businesses are still without power one week after post-tropical storm Fiona blasted through Atlantic Canada and eastern Quebec.

By mid-afternoon on Saturday, more than 66,000 customers in Nova Scotia and Prince Edward Island were still waiting for their lights to come back on.

It said over 1,500 workers are ramping up efforts to reconnect areas to the grid, mainly in eastern Nova Scotia and Cape Breton.

Utility officials in both provinces have said it could take into the coming week before most of their customers have electricity.

“In many cases downed trees are so large, heavy equipment and cranes are the only way they can be moved in order to clear the way for crews to get in and start to repair, rebuild and restore power.”

Some in P.E.I. and Nova Scotia won’t get electricity back until next week: utilities

Ottawa has deployed 700 members of the military to Atlantic Canada to assist with clearing debris and reopening roads, although the Nova Scotia government has called for more military help.

On P.E.I., the government said Saturday that clean-up and recovery work would continue throughout the weekend, while the Canadian Red Cross was to open a disaster shelter at the Murchison Centre in Charlottetown for people requiring temporary relocation.

The shelter would be available 24 hours a day, seven days a week, officials said.

This report by The Canadian Press was first published Oct. 1, 2022.