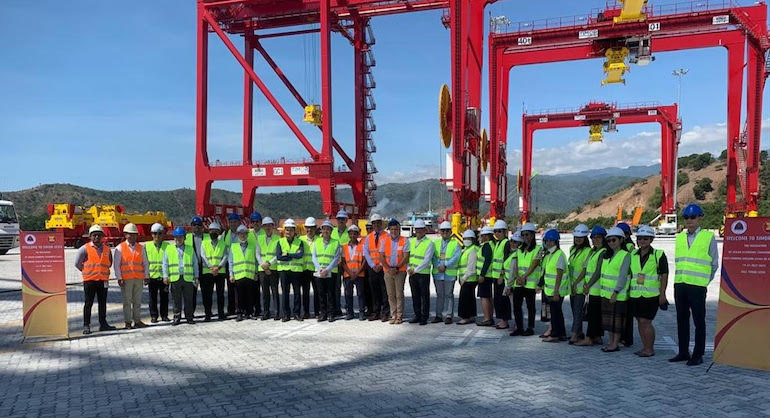 The new infrastructure at the Southeast Asian will be able to operate container ships of 7,500 teu with an increased handling speed and a productivity, and ambitions to become a regional transhipment hub, connecting Timor’s economy with the region.

The Bolloré Group won the 30-year concession to build and operate the future deep-sea port of Dili, as a public-private partnership, the first in East Timor. It selected China Harbor Engineering Company (CHEC) for the construction of the port of Tibar west of Dili, capital of East Timor.

A recent mission from the Association of Southeast Asian Nations (Asean) headed by its Secretary, and some thirty members of this organisation, visited the future port of Timor Leste located in the Tibar Bay, as Timor Leste has applied for ratification to the Asean, the institution that politically and economically unites about ten Southeast Asian states.

“Asean membership of Timor Leste would be extremely beneficial for all Timorese. The port that will be officially commissioned before the end of this year is an asset to achieve this goal” said Raphaël Ribero, chairman of Timor Port

“This new port with its international standards and new handling equipment of the latest generation, will enable the country to attract new businesses, participate in the diversification of the country’s economy and join the ranks of the great modern ports of the region. Because of its draught and its facilities, the Asean countries will be able to benefit from high quality services, particularly about the Oil & Gas business ” said Laurent Palayer, CEO of Timor Port.

The new machines are equipped with a control system, and a new-generation power supply system that reduces CO2 emissions and energy consumption. The new equipment is part of the Green Terminal certification process designed to reduce the carbon footprint of operations.