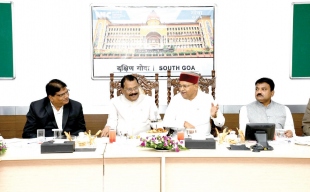 MARGAO: In a bid to strengthen the border relations among Goa and Karnataka, Governor of Goa P S Sreedharan Pillai and his counterpart of Karnataka Thawar Chand Gehlot on Saturday held a joint meeting with the District Collectors of bordering districts of both the States, at the South Goa Collectorate, here.

Interestingly, Governor of Karnataka Thawar Chand Gehlot highlighted the problem of drug trafficking in both the States.

At the meeting, the Governor of Goa stressed on maintaining border relations and strengthening unity among the people of both the States.

“People are supreme in democratic system and discussions among the inter-State Administrative Officers assume much significance to address the issues and find solutions in the interest of common people,” Pillai said.

Mentioning the Mhadei River issue, he stated that a legal system is in place which would resolve the issue.

Governor of Karnataka highlighting the problem of drugs trafficking in both the States, advised to hold serious deliberations between the two States in order to prevent drugs trafficking. Consumption of drugs, he said has ruined lives of several people.

He further suggested strengthening the tie up between the states for enhancing tourism business and economic growth.

Gehlot also expressed the need to have proper infrastructure for solid waste management and recycling mechanisms to tackle the problem and called on both the States to resolve issues pertaining to solid waste.

It was informed that a joint meeting of District Collectors was held as advised by Prime Minister Narendra Modi during the Governor’s Conference held in Delhi in order to resolve the issues between border districts.

Several high-level officials from both the States were present at the meeting.