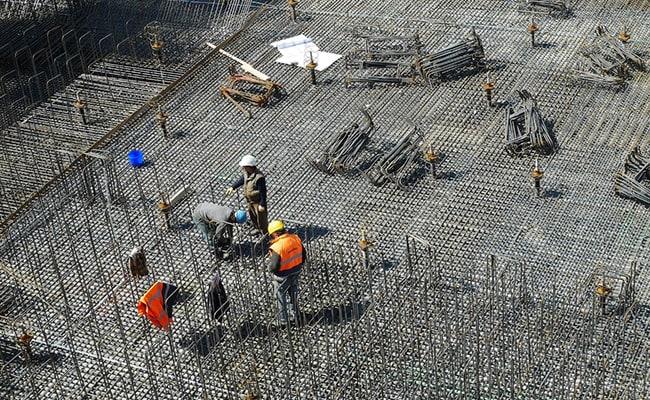 Since August 2022, demand for cement has seen an upward trend.(Representational)

The prices of cement stocks were on a downtrend in the first half of 2022.

An increase in prices of raw materials such as pet coke and coal led to the fall in margins of cement companies, which resulted in a decline in their share price.

But since August 2022, the prices of coal and pet coke have started to soften, reducing the input costs for cement companies and indicating a better business outlook.

The demand for cement is also high due to the government’s infrastructure push, and increasing need for urban housing. This bodes well for top cement stocks in the near term.

With the help of Equitymaster’s Indian stock screener, we have shortlisted top five cement companies by growth.

The company is a part of the prestigious JK Organization, a subsidiary of JK Lakshmi Cement. It has a total manufacturing capacity of 2.2 million tons per annum (MTPA).

The company has been actively expanding its footprint in India and now has a strong presence in the northern, western and eastern regions in the country, which also happen to be its key markets.

Apart from this, it also cross-sells cement under its parent company’s brands.

In the last five years, this penny stock has registered the highest growth in revenue among cement companies.333#3

Its revenue has grown at a compound annual growth rate (CAGR) of 19.1%. This was mainly driven by growth in sales volumes and realizations. 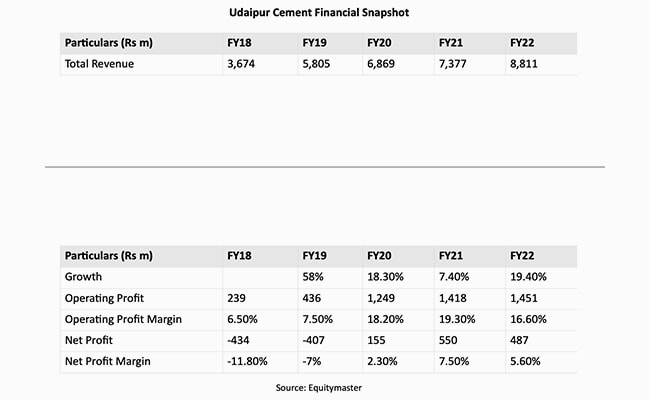 The company plans to further expand this capacity in the current year by 1.5 m tons, and 2.5 m tons respectively.

Udaipur Cement Works is funding this capex majorly through debt, which will increase the company’s interest expense affecting its profitability.

At present, its debt-to-equity ratio stands at 1.8x with an interest coverage ratio of 2.3x. Its return on capital employed (RoCE) stood at 13.9% at the end of financial year 2022.

Next on our list isHIL Limited, the flagship company of theCK Birla Group.

The company is a leading building solutions company that offers flooring, roofing, and polymer solutions.

Having pioneered in green technology a decade ago, it also manufactures a wide range of products that are environmentally viable.

The company manufactures its products in 25 state-of-the art manufacturing facilities, with 23 located in India, one is Germany, and other in Austria.

It also invests heavily in research and strives to continuously innovate and introduce new products. 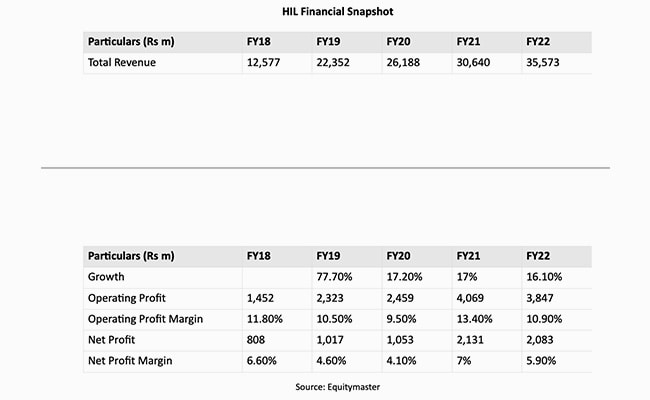 Additionally, it is also investing in a greenfield project for manufacturing panels.

To take advantage of the high demand in infrastructure and housing sector, the company is foraying into construction chemical business which will further boost its leadership position in the construction material segment.

HIL’s debt-to-equity ratio for financial year 2022 is 0.1x with an interest coverage ratio of 24.2x, indicating the company has a lot of scope to fund its growth using leverage.

This along with higher volumes, and price realization led to growth in revenue and profit which have grown at a CAGR of 13.5% and 14% respectively in the last five years. 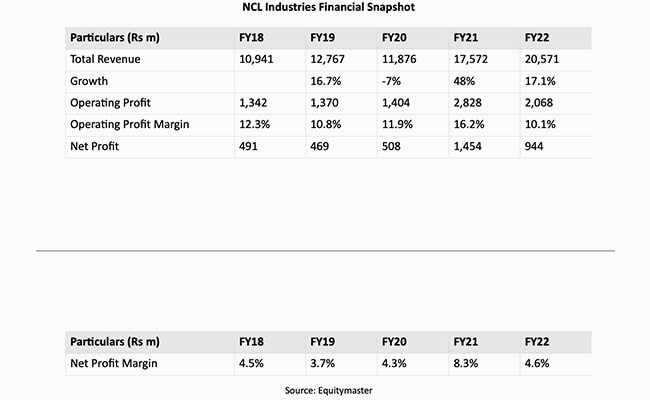 The company plans to expand its cement capacity at its Suryapet plant. It has already commenced production at its new ready mix concrete plants in Hyderabad and Vishakhapatnam.

This couldn’t have come at a better time as the demand for cement is high and the company has already invested in expanding its capacities.

However, it is important to note that the company is funding the capex through debt and promoters have pledged around 8.52% of their shares.

Its debt-to-equity ratio at the end of financial year 2022 was 0.4x and its interest coverage ratio was 6.8x. Any increase in debt can affect its credit metrics.

Going forward, its strong presence in South India, and growing demand for cement can drive up the company’s revenue in the medium term.

Next on our list is the flagship company of the Aditya Birla Group,Ultratech Cement.

The company is the largest manufacturer of grey cement, ready mix concrete (RMC), and white cement in India. Apart from these, Ultratech Cement also manufactures a slew of specialty concretes that meet specific needs of customers.

It has a total installed capacity of 120 MTPA of grey cement and 1.5 MTPA of white cement spread across 23 manufacturing and 27 grinding units.

In the last five years Ultratech Cement’s revenue has grown at a CAGR of 11.6% driven by strong growth in volumes due to capacity addition. The net profit also grew at a CAGR of 26.4%, despite increase in input costs. 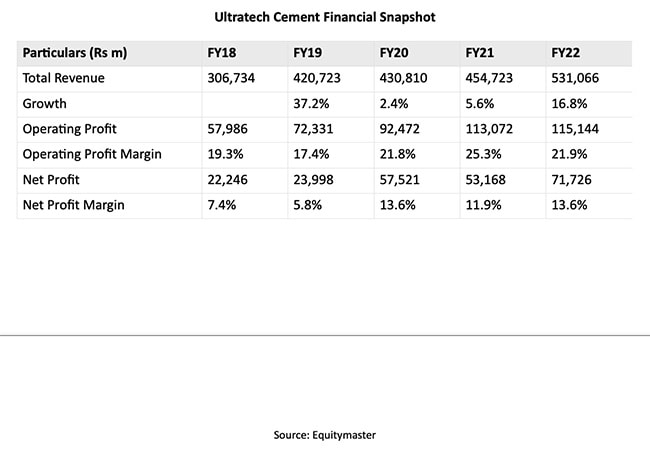 Ultratech Cement has a huge capex planned to capture the growth in the cement industry.

It is increasing its manufacturing capacity by 22.6 metric tonnes per annum (MTPA) through greenfield and brownfield projects. This will increase its total capacity to 159.25 MTPA by 2025.

The company announced Rs 128 bn for this capex plan, which will be partially funded through debt. This might increase its debt-to-equity ratio which currently stands at 0.1x.

With the company being the leading player in the industry, it stands to benefit from the government push towards infrastructure, and growing demand for cement.

This will drive its revenue and profit upwards in the medium term.

Last on our list is another company of the JK group,JK Cement.

With over four decades of experience, JK cement is one of the leading player in the cement industry.

It manufactures grey cement, white cement, and allied products in India. Its white cement is one of the most preferred product in over 36 countries.

The company has 14.7 MTPA of grey cement capacity, and 2.8 MTPA of white cement making JK Cement the second largest producer of white cement in India. It also generates power from coal, solar, and wind sources for captive use.

The expected cost for this capex is Rs 29.7 bn, which will be funded partially through debt.

Its debt-to-equity ratio and interest coverage ratio currently stand at 0.7x, and 4.8x, respectively. Despite heavy capex investment in the past, the company maintained its debt levels and expects to do the same in the future.

Why should you include cement stocks in your portfolio?

However, despite being cyclical, there is a lot of scope for growth for the cement industry in India.

India is the second largest producer of cement in the world, but the per capita consumption is around 235 kg, way below the global average of 500 kg. Hence there is a lot of scope for growth.

With all companies investing heavily in capex, the prospects look bright for the industry. Yet, it is important to assess each individual company before considering it for investment.

Do not forget to check the fundamentals and valuation of the company before investing in it. A fundamentally strong company, promises growth.

(Disclaimer: This article is for information purposes only. It is not a stock recommendation and should not be treated as such.)

This article is syndicated from Equitymaster.com