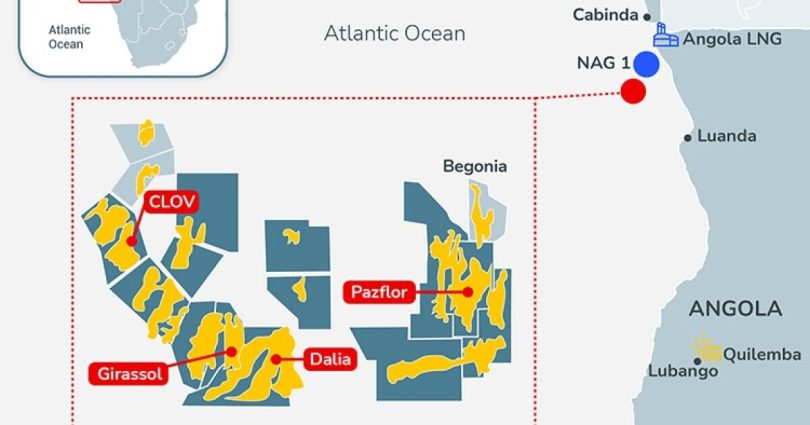 TotalEnergies has green-lit the development of a trio of fields offshore Angola, including the country’s first nonassociated natural gas project. First, Begonia, the initial development of Block 17/06, is an oil discovery located 150 km off the Angolan coast. The $850 million Begonia development plan comprises five subsea wells tied back to the Pazflor FPSO, already in operation on Block 17. After commissioning, expected in late 2024, it will add 30,000 B/D to the FPSO’s production.

After CLOV Phase 3, another satellite project that produces 30,000 B/D and was launched on Block 17 in June 2022, Begonia is the second TotalEnergies-operated project in Angola to use a standardized subsea production system, saving up to 20% on costs and shortening lead times for equipment delivery.

About 70% of the 1.3 million man-hours of work estimated for the project will take place in Angola.

NAG1 is the first nonassociated natural gas project developed in Angola. Gas produced from the Quiluma and Maboqueiro offshore fields will supply the Angola LNG plant, improving Angola’s LNG production capacity and the availability of domestic gas for the country’s industrial development. Production is scheduled to start in mid-2026.

In addition to the hydrocarbon projects, TotalEnergies said it would also proceed with the Quilemba project, Angola’s first TotalEnergies solar plant. TotalEnergies, alongside the Ministry of Energy and Water and its partners Sonangol and Greentech, was also awarded by the Angolan authorities the concession for the construction of the Quilemba photovoltaic plant, with initial capacity of 35 MWp (a measure of the maximum potential output, or peak, of power) and the possibility of adding 45 MWp in a second phase.

The plant will be in the southern city of Lubango and should come online at the end of 2023. Through a fixed-price power purchase agreement, it will deliver savings for the Angolan government compared to the fuel used in existing power plants. TotalEnergies holds an 51% interest in Quilemba solar, alongside affiliates of Sonangol EP (30%), and Angola Environment Technology (Greentech, 19%).