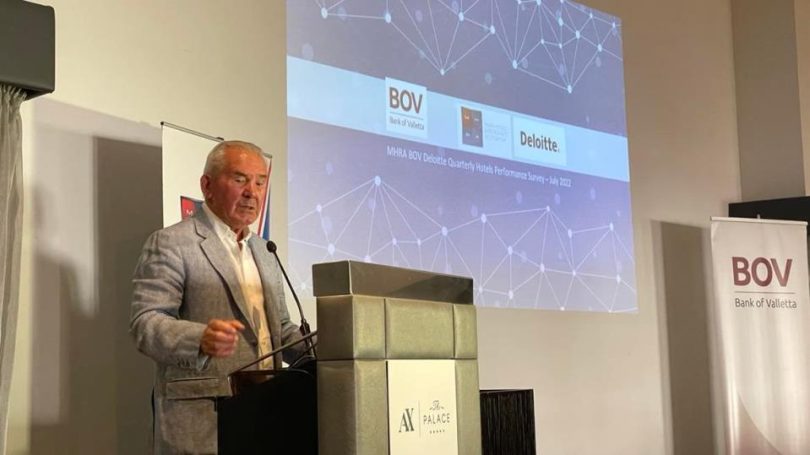 The number of tourists who visited Malta in the second quarter of 2022 was 86% of the total in the same quarter of 2019, before the Covid pandemic hit, a survey carried out by the Malta Hotels and Restaurants Association shows.

MHRA President Tony Zahra stated Friday that these figures show that the hospitality business is finally gaining momentum following the hit it took during Covid times.

During a conference held on Friday morning at AX The Palace Hotel, the Financial Advisory Leader at Deloitte, Raphael Aloisio, said that recently there is a significant increase in people’s intention to book flights and holidays.

There is still a “high degree of apprehension” amongst people to fly, but he expressed how this seems to be a strong step towards achieving normality again.

The average length of stay in 2022 was marginally higher than that registered in 2019, which meant that cumulative guest nights reached 78% of the 2019 levels.

Furthermore, the total tourist expenditure from January to June of 2022 reached 76% of that achieved during 2019.

Moreover, when focusing on the average daily room rates (ADR), from 3-star to 5-star hotels, the hotels all matched the rate of 2019 and surpassed it.

Following this talk, Tony Zahra praised the hospitality industry, but described the aviation industry as being in “total chaos”.

He brought up examples such as luggage never reaching its destination, the aviation industry being understaffed or passengers waiting for ages due to the inefficient system.

However, he also took the time to praise Air Malta because without our national airline our problems would be significantly worse.

He also warned the industry about the new challenges it is going to face with the new EU green tax.

“Going forward we shall be facing huge taxes given the EU’s insistence on cutting fossil fuels by charging huge taxes on fuel which given Malta’s peripheral location could mean an extra 60 euros per passenger tax,” Zahra warned.

He stressed how as an EU country we are at a disadvantage in this scenario because only flights to EU countries will tax passengers.

In response to this, he argued that our way forward is through increasing connectivity. He asserted that collectively we have to work towards sustainable tourism, travel and hospitality industry and we must do this through innovation.