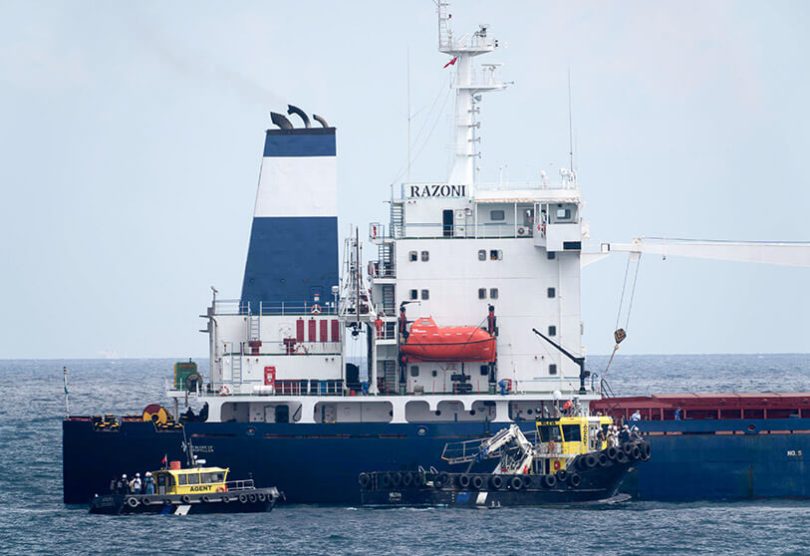 At least 16 ships are reportedly waiting to leave the Ukrainian port of Odessa with their cargoes of grain. Following the agreement between Russia and Ukraine, with Turkey as mediator, the three countries agreed to create a corridor to reopen the “breadbasket of the world” and thus reduce the negative effects on the world economy, especially in Africa.

The system put in place by the governments of Russia, Turkey and Ukraine allows cargo ships passing through Istanbul to leave Odessa to be screened by a tripartite commission to prevent the transport of arms on grain ships. Subsequently, the ships leave for their destination.

The first to leave Odessa was the “Razoni”, a Sierra Leone-flagged cargo ship, on Tuesday morning after some delays. It arrived in Istanbul on Tuesday afternoon and after inspection left the port facilities to cross the Bosphorus Strait for the Lebanese port of Tripoli.

The “Razoni” is carrying around 27,000 tonnes of maize in its hold, far less than what is needed to end the food crisis affecting the world since the start of the war in Ukraine at the end of February 2022. According to Oleksandr Kobrakov, Ukraine’s infrastructure minister, no more than five cargo ships like the “Razoni” will leave Ukraine per week, bringing Ukrainian supplies to about 150,000 tonnes of grain per week, at a rough estimate.

Reuters quotes a Turkish official as confirming the Ukrainian minister’s statement. It is believed that delays could become commonplace in the coming weeks. The cargo ships must pass through a route carefully mapped out by the tripartite agreement, which includes an area mined after the outbreak of war. The threat of an amphibious assault on Odessa forced the Ukrainian defence forces to take this measure during March 2022.

Minister Kobrakov assured Reuters that Ukrainian grain exports would take months to reach pre-war levels. The 57.2 million tonnes that the Slavic country sent to the world in 2019 cannot be compared with the current volume. Comparing the figures, at the rate of outflows allowed by the tripartite agreement, only 7.8 million tonnes of grain would be exported per year. This is too little.

According to the logistics company Primar, consulted by the Arab media Asharq, transporting the 25 million tonnes of wheat sitting unconsumed in Ukraine would require at least 370 shipments on freighters with twice the capacity of the Razoni.

The insurance industry is also worried. As if the mines were not enough, shelling by the Russian armed forces of positions very close to the port of Odessa has been reported. According to Chris McGill of the insurance company Ascott, quoted by the Financial Times, they pose a danger to the safety of shipments.

In spite of everything, the price of wheat fell on the Chicago stock exchange by 30% compared to April, a relief for the market and for the world economy.