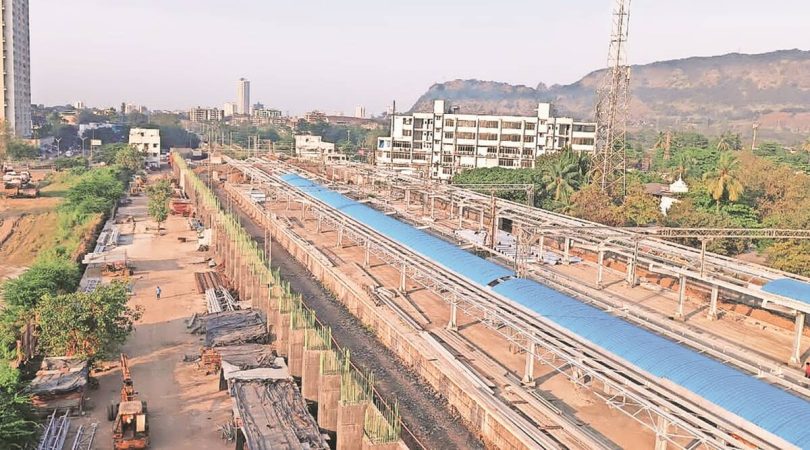 THE EXISTING trans-harbour railway line that runs between Thane and Panvel will have a new station, Digha, which will be a part of this route in January 2023. The new station will come after Airoli and will also be a part of the proposed Airoli-Kalwa elevated suburban corridor on the Central Railway line.

An official of Mumbai Rail Vikas Corporation (MRVC), which is implementing the Airoli-Kalwa suburban corridor and has also constructed the Digha station, told The Indian Express that the station is almost ready and only work of platform shelter, subway, bridge, drainage construction are in the last stages which should be completed by December this year. From January, the trans harbour line trains will also halt at Digha, said the official.

Meanwhile, the MRVC is waiting for the Mumbai Metropolitan Region Development Authority (MMRDA) to hand over land for the new suburban corridor link between Airoli and Kalwa. MMRDA is also responsible for resettlement and rehabilitation of existing slums on this land. There are about 1,080 slums spread on the private land portion. MMRDA has approved 924 rental housing units for R&R. Verification of 209 Project Affected Houses (PAHs) has been done and sent to MMRDA for allotment, of which allotment letters to 113 PAHs have already been issued, as per the MRVC.

The Airoli Kalwa elevated new suburban corridor is proposed to be completed in three years once the R&R and land acquisition is done, said the official. The new corridor has been proposed so that commuters of Central Railway catching trains from Badlapur, Kalyan, or Dombivli do not have to change trains from Thane station which is the terminus for trans harbour railway line. Currently, those travelling from the down direction on the Central Railway line and wanting to travel on the trans harbour route have to get off at Thane station. With the commissioning of the Airoli-Kalwa elevated corridor, commuters will be able to directly travel to the trans harbour line without changing local trains at Thane.