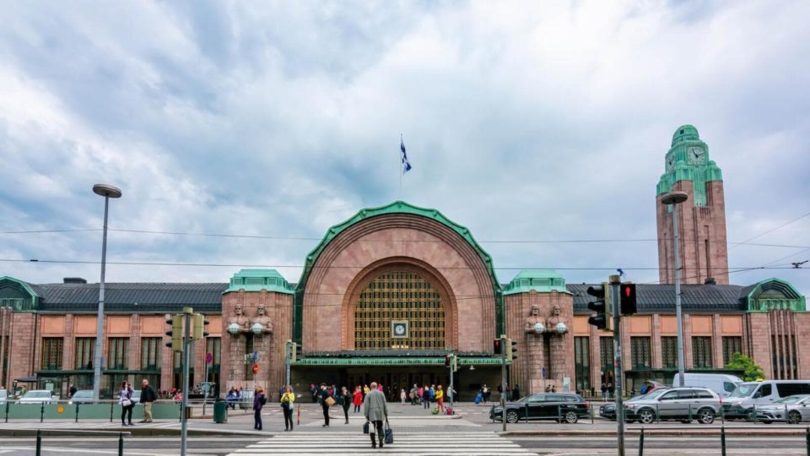 On either side of the grand entrance to the Helsinki Central Railway Station stand two statues, each holding a spherical lamp that lights up at night. The railway station is not just a city landmark, where your train from the airport will leave you as you make your way into the city; it is also the starting point of the longest railway line in the world, the 9,200 km-long Trans-Siberian Railway—currently suspended due to the Ukraine War—which runs the 21-day journey from Helsinki, Finland, across Russia to Irkutsk in Siberia.

“Don’t get distracted,” says our Finnish guide as we stand with her in front of the station. “Look at the expressions of the four statues in front of you. One is happy, the other is sad, the third is anxious, and the fourth is ecstatic. Since everyone says we Finnish have only one expression to express every emotion, these poker-faced statues encompass them all!”

Besides being a maker of bad jokes, our guide is also one opinionated lady. “See the building opposite the railway station… the one with the rounded balcony on the second floor like a sausage around it?” she asks. “We call it Helsinki’s ugliest building!”

The Helsinki Central Railway Station, we learn, was built in 1904, and its design was selected on the basis of a competition. Of the 21 entries received, the winning one belonged to architect Eliel Saarinen (whose son Eero would go on to design the TWA flight centre in the 1960s, which is talked about till today as a building comparable to those by Zaha Hadid in today’s times!).

Eliel’s design of the station abandoned romanticism and nationalism for a practical, rational approach, which is significant because it paved the way for the Scandinavian design aesthetic as we know it today.

The four statues that resemble Oscar Award trophies wear football jerseys on days of important games, and wore masks during Covid, demonstrating my point to my guide: Finns are fun, and not the cold, expressionless people they are believed to be.

Unfortunately, the only ones who don’t agree with me are the Finns themselves!

Up in the air

On my Finnair flight to Helsinki, I encountered a larger-than-usual number of Indian crew onboard. Usually, foreign airlines employ two to three local crew per flight: one is stationed in First and Business Class, and the other two are spread across Economy. These people are meant to help with announcements in Hindi or helping passengers who speak only an Indian language, etc.

I’ve flown Finnair half a dozen times before, mostly from LAX to DEL in an attempt to fly eastwards and save 12 hours of travel time, but never before had I encountered an all-Indian crew. What had changed?

“You’re right, we’re all Indian,” my cabin crew member informed me. “The only Finnish crew are the pilots in the cockpit.”

Is this to save money? Maybe local Indian crew come at lower salaries than their European counterparts? And, how will an Indian crew member replicate the Finnish experience that will set Finnair apart from a Vistara or an Air India?

I learn that Finnair implemented this in 2019, after successfully trying out this experiment on their “culturally sensitive routes” to Japan and Singapore. And on the flight, I could see the Indian staff handle the desi guests with ease: one gentleman wanted to video call his family to show off the light-hued, minimalistic Business Class cabin, and asked the flight attendant to say hi… “My daughter says you’re very beautiful,” he told the lady crew member after he hung up, with an innocence only an Indian would understand. (I wonder how an European crew member would take that—certainly not with the humour I’m harping about.)

A Finnair staffer I chatted with later had a different take completely: “We Finns are not as service-oriented as we are with other jobs. And we know Indian customers expect a high standard…”

One walk around Helsinki’s design district can convince you that Nordic and Scandinavian design is simple, but stunning.

You will be pointed to Finnish designer Markmekko more than once, whose circles and other geometric shapes have the power to eliminate excess forever. And, amongst the local design stores, you will find the most forward-thinking idea of them all: thrift stores.

Downtown Helsinki is littered (no pun meant or intended) with stores selling pre-loved everything, from clothes to shoes, books, accessories and utensils. Not only are these a great bargain, they’re a great act in the name of sustainable living.

An activity many skip in Helsinki is a visit to the Botanic Garden, also known as the “Central Park” of the city. Foraging in public spaces, like these gardens, is open to all, and is the most underrated activity of all time.

The most overrated thing to do is visit the sauna. Now, Finns who crave sunlight love sweating it out in the saunas you can find around every corner. It’s a social activity that is established as well as encouraged. We tried hot yoga in a sauna, and given that we come from India, the entire exercise was unimpressive. What was impressive, however, was the social interactions a sauna offers; hanging out with your clothes off is another mental block that’s easily shattered.

One thing that’s only meant for the bravehearts at a sauna is the plunge in the sub-zero waters of the sea. If cold water can stimulate the skin and the brain, seven dips later, I must be the smartest guy on earth!

Case for the defence

It’s interesting to note that Helsinki is just two and a half hours behind India, in the same time zone as Istanbul and certain countries in the Gulf. While the Finnair flight connecting Helsinki to Delhi used to take a mere six hours—one of the shortest ones to India from Europe—it now takes over nine, because all aircraft must fly south below Ukraine and avoid Russia completely.

On my way back to India, as I self-tagged my checked-in luggage, I saw my Finnish guide help another family close by. The machine wouldn’t accept a bag that weighed 24kgs, so our opinionated, expressionless Finnish friend was repacking an Indian person’s suitcase!

The next time I hear someone tell me that Finnish people are cold and not very expressive, I’ll think of this experience, and know: These chaps don’t know what they’re talking about!

Wander Boy says, “When travelling abroad in the past, I often used to get asked, ‘Which part of India are you from?’ Now, I’m asked, ‘Are you an Indian from India, or elsewhere…?’”

Finnair debuted a much-awaited, first in luxury aviation business class on their Airbus A350s just a few months ago.

Before the launch, #AvGeeks were curious: how will a business class seat that doesn’t recline work? Was Scandinavian minimalistic turning to Scandanavian frugal?

Turns out, they needn’t have sorted. For, the new seat was a hit from the word go. The capsule seat in light Nordic colours may not have a recline, but it does have a support for the back of the leg that bridges the gap between the seat and the footrest. For the back, the airline provides cushions, which you may prop up to sit and eat, scrunch to the side when watching a movie, or slide down and place under your head for a good night’s sleep.

It’s almost like adjusting yourself on the couch at home, most reviewers have said, calling it a simple solution that no airline seat designer had foreseen.

Unfortunately, Finnair is not flying these aircraft to Mumbai or Delhi yet, but if you’re connecting to the US, you have a good chance of getting one.

Connect with us on facebook.com/hindustantimesbrunch