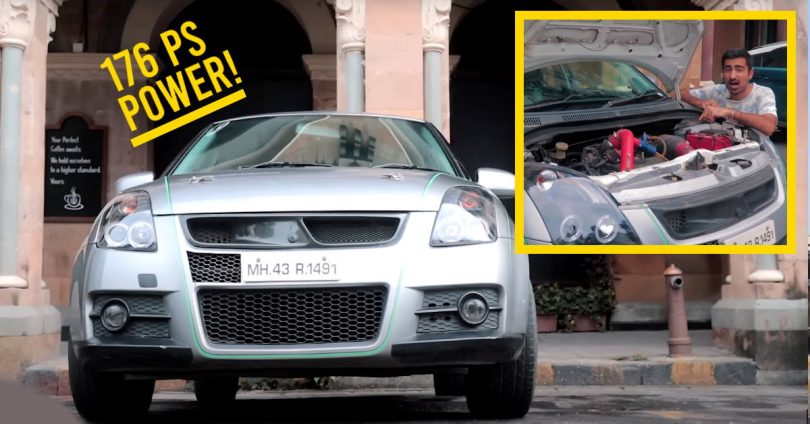 While small car makers have always relied on naturally-aspirated petrol engines for compact hatchbacks, the trend is changing now. The sub-compact offerings, especially in the SUV category, have started receiving turbocharged petrol engines, which offer the possibility of extracting both performance and efficiency from a downsized engine. However, not all of them offer exhilarating performance levels for a driving enthusiast, like this heavily customised Maruti Suzuki Swift, with an aftermarket turbocharging kit for its naturally-aspirated engine.

We are talking about renowned rally racing driver Bairam Godrej’s fully-customized first-gen Maruti Suzuki Swift, which has a host of modifications done to its mechanicals. The details of all the mechanical tweaks and add-ons are shown in a YouTube video uploaded by ‘The Drivers Hub’. Based on the first-gen petrol-powered Swift, which came with a 1.3-litre naturally-aspirated G13BB petrol engine from the Esteem, this Swift is a perfect example of how a modification should be done for a compact car.

Let’s start with the mechanical modifications first. This heavily-modified Swift gets an aftermarket G20 Garrett turbocharger at the front, a huge intercooler with silicon piping and plumbing, a BMC air filter, a Stage-1 clutch, a Stage-1 flywheel and a Turbosmart blow-off valve. With all these add-ons, the 1.3-litre engine of the Swift now produces 176 bhp of power output, which is almost double the 90 bhp power output from the engine in its stock form. To handle this humongous bump in power output, the engine is now equipped with forged pistons and an upgraded ECU from Haltech.

Apart from the tweaks done to the powertrain, this first-gen Maruti Suzuki Swift gets a host of other mechanical enhancements too. To improve its stopping power, this Swift comes with D1-spec 320mm slotted disc brakes on all four wheels, and grey-coloured 16-inch Sparco alloy wheels with Yokohama tyres. It also gets a fully electronically adjustable suspension, which has lowered the stance of the car. The input for alterations in the suspension kit is given from a controller unit beside the centre console.

The Maruti Suzuki Swift here also gets several cosmetic tweaks, which create a strong first impression as a performance-spec car. The front bumper is tweaked with a carbon-fibre grille with honeycomb inserts, with it getting two different openings. While the left opening channels air to a vertically-mounted intercooler, the right opening sends air straight into the air intake.

The car also has first-gen Swift Sport’s front and rear bumpers, a double spoiler at the back and custom headlamps and tail lamps. The car is painted in a shade of silver, which is well contrasted by a green-coloured pin-striping job on the sides. The interior of this Maruti Suzuki Swift is also heavily modified, with the inclusion of a suspension controller, sport seats and steering wheel from Toora, a Takata four-point harness for the front seats and a Defi boost gauge.