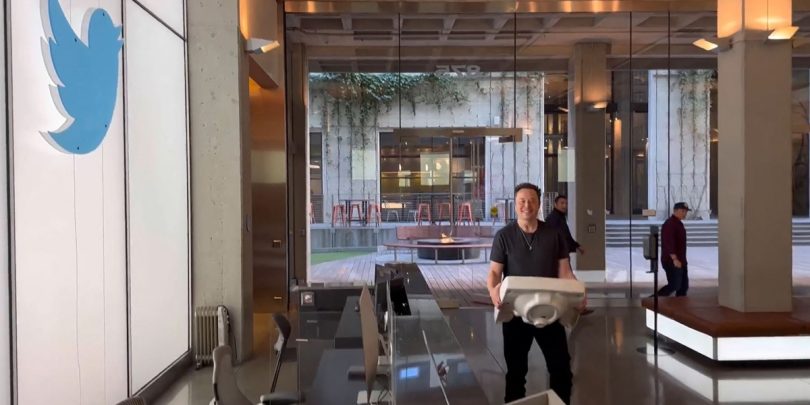 TikTok CEO Shou Zi Chew treaded carefully Tuesday when asked for his opinion on the tumult at Elon Musk-owned Twitter. Speaking at Bloomberg’s New Economy Forum, Chew said it’s “too early to tell” whether Musk’s overhaul will prove prosperous, adding that “I’m sure there are many other changes internally” the public isn’t seeing.

Chew did, however, issue an indirect warning to his new social media rival.

“For many tech companies, including ourselves, one of the largest teams that you will have is your trust and safety team—which is not only the people who design the policies around community guidelines, but the people who complement the machines in terms of the content moderation and protecting the platform and making sure the content is safe,” Chew said. “Now, that is an investment I think is definitely worthwhile if you want to keep the platform a very safe platform.”

Chew’s comments, perhaps unintentionally, cut to one of the biggest question marks still looming over Musk’s embryonic tenure as Twitter’s owner: just how committed is he to keeping Twitter safe?

For all of the attention paid to Musk’s fixation on free speech and fake accounts, Twitter spends huge amounts of time and money on making Twitter into a user- and advertiser-friendly platform.

To wit, Twitter reported that it removed 5.1 million pieces of content from its site in the second half of 2021. Most posts fell under five categories: “abuse/harassment” (1.3 million); “hateful conduct” (1.3 million); “sensitive media,” such as graphic violence or sexual material (1.1 million); “illegal or certain regulated goods and services” (572,000); and “promoting suicide or self-harm” (510,000).

Musk has made vague commitments to content moderation practices on Twitter, but recent actions suggest safety—at least in the short term—isn’t a top priority.

As multiple media outlets reported earlier this week, Twitter gutted its contract workforce that, in large part, is responsible for the day-to-day execution of content moderation. Those cuts followed Musk slashing Twitter’s full-time workforce dedicated to trust and safety by 15%, according to the department’s former chief, Yoel Roth, as well as several resignations of executives overseeing those efforts.

Twitter hasn’t confirmed the scope of the cuts, but Platformer’s Casey Newton pegged them at roughly 4,400 out of 5,500 workers. Twitter had more than 2,000 people working on front-line content moderation, the platform’s former head of trust and safety, Roth tweeted earlier this month. For context, Chew said Tuesday that TikTok, a platform that likely has four to five times as many daily active users as Twitter, employs “tens of thousands” of people in content moderation.

Then, in an early-morning email Wednesday, Musk told his remaining Twitter employees that the company’s focus will be “much more engineering-driven,” with little reassurance given about the importance of content moderation.

“Design and product management will still be very important and report to me, but those writing great code will constitute the majority of our team and have the greatest sway,” Musk wrote. “At its heart, Twitter is a software and servers company, so I think this makes sense.”

For now, Musk’s moves will only add to corporate America’s concerns about their ads commingling on Twitter with offensive content. Dozens of worldwide brands have publicly announced they are pausing their marketing spend on Twitter, while major corporate ad buyers Omnicom Media Group and IPG’s Mediabrands have urged clients to suspend their Twitter campaigns.

There might be some method to Musk’s madness. In theory, Musk could be diverting as many resources as possible to gutting Twitter’s plumbing, in the hopes of re-engineering and revitalizing the platform. If successful, Twitter could attract more users, thereby making it more enticing for advertisers. Once that happens, Musk could reinvest in content moderation.

Would such a gamble work? As Chew said, it’s too early to tell much of anything with Twitter. Advertisers, however, can’t be blamed for bolting before seeing where the chips fall.

Want to send thoughts or suggestions to Data Sheet? Drop me a line here.

Congress has some questions. The U.S. House Financial Services Committee plans to conduct a December hearing on the collapse of cryptocurrency exchange FTX, Reuters reported Wednesday. Committee leaders said they will seek testimony from former FTX CEO Sam Bankman-Fried, officials involved with the FTX-linked crypto trading firm Alameda Research, and rival crypto exchange Binance. Some members of Congress have called for new laws designed to protect consumers from events like FTX’s bankruptcy filing, which is expected to involve more than 1 million creditors owed billions of dollars.

Halt while catching fire? Institutional crypto lender Genesis Global Capital told customers it is suspending redemptions and will not issue new loans as it sorts through the fallout of FTX’s demise, CoinDesk reported Wednesday. The outfit, which operates as an arm of crypto investment bank Genesis Global Trading, reported that it had $2.8 billion in active loans as of the end of the third quarter of 2022. Genesis Global Capital’s interim CEO said the unit is seeking sources of liquidity and plans to update clients on its status next week.

Back-to-back bummers. Chinese tech conglomerate Tencent said its revenue fell for the second straight quarter as China continues to grapple with an economic slowdown, the Wall Street Journal reported. Tencent officials said revenue slipped 2% year-over-year in the third quarter, while net profit ticked up 1%. The social media and video game giant also announced its give shareholders nearly all of its 17% stake in Chinese food-delivery company Meituan, worth roughly $20 billion, in the form of a dividend.

Made in the U-S-of-A. Apple CEO Tim Cook told employees this fall that the company expects to soon begin sourcing semiconductors manufactured in the U.S., the latest step toward geographically diversifying its supply chain, Bloomberg reported Tuesday. Cook said the tech giant will buy chips from a plant set to begin production in Arizona in 2024, a likely allusion to a Taiwan Semiconductor Manufacturing Co. under construction outside of Phoenix. TSMC, the world’s largest chip manufacturer, is working to fabricate more chips outside of Taiwan, while Apple hopes to cut its reliance on products made in the geopolitical hotbeds of China and Taiwan.

Just another Excel wizard. How did FTX CEO Sam Bankman-Fried convince some of Silicon Valley’s savviest venture capitalists to invest in his house of cards? Fortune’s Luisa Beltran reported Tuesday that the one-time crypto wunderkind relied on messy spreadsheets that showed massive revenue growth, causing potential investors to swoon. The records, which Beltran reviewed, suggested FTX’s revenue shot up from about $15 million in 2019, the year it was founded, to more than $1 billion in 2021. Meanwhile, the documents purported to show net profits jumping from $3 million to $370 million. However, the spreadsheets lacked basic information, such as FTX’s valuations of tokens it held, and didn’t outline the company’s disastrous liabilities tied to the affiliated trading firm Alameda Research.

Taken together, the documents show an early picture of an outrageously fast-growing enterprise run by a founder who eschewed traditional management structures, board oversight, teams of accountants and lawyers, and other standard practices of businesses that grow to this size.

The spreadsheets are a far cry from audited financials; rather, they appear to be homespun Excel files, which are at times confusing and have inaccurate labels. They are sales documents, and do not provide a clear accounting of how FTX was valuing its various tokens or liabilities when calculating figures such as “net profits.” And yet Bankman-Fried was able to translate such documents into nearly $2 billion from some of the savviest investors around.

IN CASE YOU MISSED IT

Elon Musk finally makes up his mind on Twitter Blue: You’ll be an ‘official’ celeb or company if enough verified people follow you, by Sophie Mellor

We could cut rear-enders in half if all our cars had automatic brakes, studies show, by Tom Krisher and the Associated Press

Pulling the plug. A melancholy farewell to Protocol, a splendid addition to the tech reporting scene and a semi-frequent staple in Data Sheet. The outlet announced Tuesday that it was immediately halting publication after nearly three years in digital circulation and laying off about 60 staffers. Former Politico owner Robert Allbritton launched Protocol in April 2020, positioning it as a sister publication to its politically-minded compatriot. But a confluence of events—the COVID-19 pandemic, Allbritton’s sale of Politico to Axel Springer, the downturn in advertising growth—caused the site to short-circuit. In honor of the fine work done by the Protocol crew, a final story recommendation: Nick Statt’s piece on the surprising slump in mobile gaming.