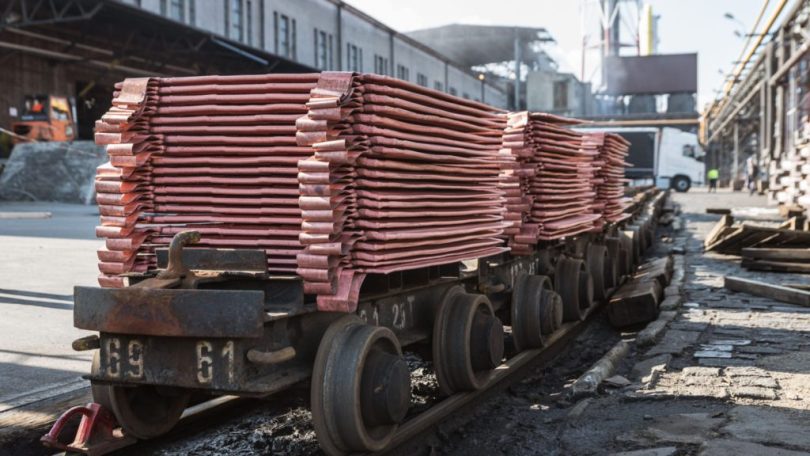 Now Maike is suffering a liquidity crisis, and He’s empire is under threat. The ripple effects could be felt across the world: the company handles a million tons a year — a quarter of China’s refined copper imports — making it the largest player in the most important global trade route for the metal, and a major trader on the London Metal Exchange.

With his wide network of contacts giving enviable insight into China’s factories and building sites, He has been a poster child for China’s commodity-fueled boom over two decades — making a fortune from its ravenous demand for raw materials and then plunging it into the red-hot property market.

But this year, Beijing’s restrictive Covid Zero policies have hit both the property market and the copper price hard. After months of rumours, He admitted publicly last month that Maike had asked for help to resolve liquidity issues.

He said the problems are temporary and affected only a small part of his business, but his trading counterparties and creditors are being cautious. Some Chinese domestic traders have suspended new deals, while one of the company’s longest-standing lenders, ICBC Standard Bank Plc, was concerned enough that it moved some copper out of China that had been backing its lending to Maike.

Even if it can secure support from the government and state banks, industry executives say Maike may struggle to maintain its dominant role in the Chinese copper market.

Much as He’s rise was a microcosm of China’s economic boom, his current woes may mark a turning point for commodity markets: the end of an era in which Chinese demand could only go up.

“In some ways, Maike’s story is the story of modern China,” said David Lilley, who started dealing with Maike in the 1990s, first as a trader at MG Plc and later as co-founder of trading house and hedge fund Red Kite. “He has skillfully ridden the dynamics of the Chinese economy, but no one was prepared for the Covid lockdowns.”

This account of He’s rise to the pinnacle of China’s commodities industry is based on interviews with business associates, rivals and bankers, many of whom asked not to be named because of the sensitivity of the situation.

A spokesperson for Maike declined to comment on this story, but said in response to earlier questions from Bloomberg on Sept. 7: “Our company has been deeply involved in the development of the commodity industry for nearly 30 years. It had maintained a steady development as witnessed by everyone. It will soon resume normal operations and continue to contribute to the development of the industry and the local economy.”

Born in 1964 in the Chinese province of Shaanxi, He’s first encounter with copper came when he got a job procuring industrial materials for a local firm. As a young man, he was paid to guard cargoes of copper in trains crisscrossing China — which could be a cold job on freezing winter nights.

In 1993, He and several friends established Maike in the western city of Xi’an, known as the capital of China’s first emperor and the location of the iconic Terracotta Army statues. The group took out a loan of 50,000 yuan (about $7,200) to buy and sell mechanical and electrical products. But He’s early encounter with copper had made an impact, and they quickly moved their focus to scrap metal, copper wire and refined copper.

With a personable nature, a broad grin and a light-hearted sense of humor, He was a natural commodity trader whose charisma would help him build a wide network of friends and business contacts.

As China’s economy liberalized, He used his connections to make Maike a middleman between big international traders and China’s burgeoning throng of copper consumers.

In the space of 15 years, China would go from consuming a tenth of the world’s copper supply to 50%, triggering a supercycle of skyrocketing prices for the metal which is used in electrical wires in everything from power cables to air-conditioning units.

This was a wild era when, for many, China’s commodity markets were little more than a casino. Groups of traders would team up to bet together, launching ambushes against their opponents on the other side of the market. The bravest players would be nicknamed after the martial art masters of popular novels.

While many traders came and went in these go-go years, He persisted.

“We did a huge amount of business together over twenty years,” said Lilley. “There were times when the Chinese metals trade was a real wild west and he stood out for his honorableness. He would always make good on his word.”

He also had another characteristic essential for a successful commodity trader: an appetite for risk.

His big break came in the early days of the supercycle. In May 2005, China’s metals industry gathered in Shanghai for the Shanghai Futures Exchange’s annual conference. Copper prices had risen sharply, and most of the producers, fabricators and traders in the audience thought they would soon fall. Even China’s mighty State Reserve Bureau had made bearish bets.

They were shocked to hear Barclays analyst Ingrid Sternby predict that copper would hit new highs as Chinese demand exceeded supply. But she was soon proved right, as prices more than doubled in the next 12 months. The SRB’s losses became a national scandal, and most Chinese traders missed the opportunity to cash in on the gains.

He was not among them. Paying close attention to demand from his network of Chinese consumers, he had built up a bullish position and profited handsomely from the global price surge.

It was a pattern he would successfully repeat many times over the years. His preferred strategy involved selling options — on the downside, at the price his Chinese customers were likely to see as a buying opportunity, and on the upside, at a price they were likely to consider too dear.

While he enjoyed some of the trappings of success, people who have known He for many years say he remained down-to-earth even as his net worth swelled to levels that probably made him, at his peak, a dollar billionaire.

In Shanghai, he would regularly have lunch at a restaurant serving cuisine from Xi’an, where he’d eat his favorite steamed cold noodles and fried leek dumplings for 50 yuan ($7).

The evolution of He’s business mirrored the changes taking place in the Chinese business world. Although he had started simply as a distributor of physical copper, he soon pioneered the growing interconnections between the commodities business and financial markets in China.

As Maike grew to become the country’s top copper importer, He began to utilize the constant flow of metal to raise financing. He could ask for prepayments from his end customers, and also borrow against the increasingly large volumes of copper he was shipping and holding in warehouses. Over the years, the connection between copper and cash became well established, and the ebbs and flows of China’s credit cycle became a key driver of the global market.

He would use money raised from his copper business to speculate on the exchange or, increasingly, invest in China’s booming real estate sector. Starting in around 2011, He built hotels and business centers, and even his own warehouses in Shanghai’s bonded zone.

As the state became an ever more dominant force in China’s business world, He turned his focus to investing in his hometown, Xi’an, backing projects under Xi Jinping’s Belt and Road Initiative.

This year, however, He’s empire started to wobble.

The city of Xi’an faced a month-long lockdown in December and January, and further restrictions in April and July as Covid re-emerged, hurting He’s property investments. His hotels sat almost empty for months, and some commercial tenants simply stopped paying rent.

Maike was one of a number of companies that plunged their fortunes into the property market in the boom years, said Dong Hao, head of the Chaos Ternary Research Institute. “After the sharp turnaround in real estate last year, such companies have encountered various difficulties,” he said.

The Chinese economy’s wider malaise has also caused the copper price to slump, while at the same time Maike suffered the result of growing caution among banks toward the commodity sector in China. Trust in the industry was hurt by the historic nickel squeeze in March, as well as several scandals involving missing aluminum and copper ores.

The future is uncertain. He met a group of Chinese banks in late August at a crunch meeting organized by the local Shaanxi government. Maike later said that the banks had agreed to support it, including by offering extensions on existing loans.

But its trading activity has largely ground to a halt as other traders grow increasingly nervous about dealing with the company. And, in the wake of Maike’s troubles, some of the biggest banks in the sector are pulling back from financing metals in China more generally.

Within China, He’s woes elicit mixed emotions. Many mourn his situation as tragic for the Chinese commodities industry and emblematic of an economy increasingly dominated by state companies.

Others would be less sad to see the end of a business model that elevated copper to a financial asset and sometimes caused import margins to diverge from physical fundamentals.

“For many years, traders like Maike have been quite important in the importation of copper into China — they’ve bought very consistently to keep the flow of financing going,” said Simon Collins, the former head of metals trading at Trafigura Group and the CEO of digital trading platform TradeCloud. “With the property market like it is, I think the music could be stopping.”

(Reporting by Alfred Cang and Jack Farchy with assistance from Winnie Zhu).