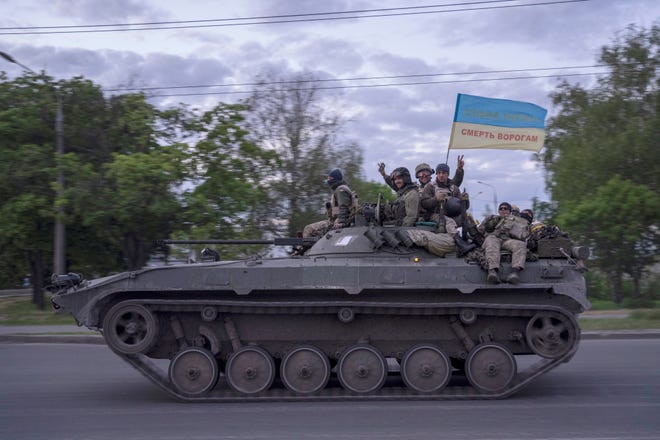 In the nearly four months since Russia began its invasion of Ukraine, its forces have damaged and destroyed thousands of buildings, including cultural sites, hospitals, schools and residences, and Ukrainian officials are taking stock of the damage.

President Volodymyr Zelenskyy said in his nightly address Saturday that nearly 2,000 educational institutions had been destroyed by Russian forces since the invasion began Feb. 24.

“This is a colossal scale of losses,” he said.

Friday, a Russian missile strike in Lozova in the Kharkiv Oblast region damaged more than 1,000 apartments, Mayor Serhiy Zelensky said in a video on Saturday, according to CNN.

“The figures are shocking: 11 educational institutions, including five schools…. Our Palace of Culture was completely destroyed too,” the mayor said.

In Ukraine’s second-largest city of Kharkiv, from which Russian forces withdrew last weekend after months of bombardment, about 30% of the 8,000 some residential high-rises were “more or less destroyed,” Ukraine’s Center for Strategic Communications and Information Security said in a Telegram post Saturday.

Mapping and tracking Russia’s invasion: See where Russian forces are moving within Ukraine

►President Joe Biden on Saturday signed a bill to grant $40 billion more in aid to Ukraine, after it received bipartisan approval from legislators earlier in the week.

►More than 900 American public servants, researchers and activists have been permanently banned from entering Russia in response to the United States’ sanctions on the nation and its support for Ukraine.

Ukraine’s 30th Mechanized Brigade said Saturday it had “destroyed” a Russian battalion tactical group as it attempted to make a crossing of the Seversky Donets River, a major obstacle for the Russians in their focus on the eastern region.

The 30th Mechanized Brigade said it had “dealt a significant blow” to Russian forces crossing.

“As a result, the Russians lost considerable strength – at least one battalion tactical group, pontoon bridge equipment was disabled during the forcing of the river, destroyed several units of equipment and several dozen personnel,” it said in a Facebook post.

Concern mounted Saturday over Ukrainian fighters who became prisoners at the end of Russia’s brutal three-month siege of Mariupol, as a Moscow-backed separatist leader vowed they would face tribunals.

Russia claimed full control of the Azovstal steel plant, which for weeks was the last holdout in Mariupol and a symbol of Ukrainian tenacity in the strategic port city, now in ruins with more than 20,000 residents feared dead. Its seizure delivers Russian President Vladimir Putin a badly wanted victory in the war he began in February.

The Russian Defense Ministry released video of Ukrainian soldiers being detained after announcing that its forces had removed the last holdouts from the plant’s extensive underground tunnels. Denis Pushilin, the pro-Kremlin head of an area of eastern Ukraine controlled by Moscow-backed separatists, claimed that 2,439 people were in custody. He said on Russian state TV that the figure includes some foreign nationals, though he did not provide details.

Family members of the steel mill fighters, who came from a variety of military and law enforcement units, have pleaded for them to be given rights as prisoners of war and eventually returned to Ukraine. Deputy Prime Minister Iryna Vereshchuk said Saturday that Ukraine “will fight for the return” of every one of them.

What the US aid to Ukraine covers

With the additional $40 billion in aid money to Ukraine that President Joe Biden signed on Saturday, the combined $53.7 billion in total aid sent is about 81% of Russia’s 2021 defense budget. It’s also more than one-quarter the size of Ukraine’s pre-war economy.

That money includes amounts to directly aid Ukraine’s governmental functions, supply emergency food assistance, increase U.S. crop production to make up for global food shortages, and provide for the up to 100,000 Ukrainian refugees who will arrive in the U.S.

“The cost of this fight is not cheap,” Biden said when he made the funding request to Congress, “but caving to aggression is going to be more costly if we allow it to happen.”

Read more about the money, who pays for it and how it compares.