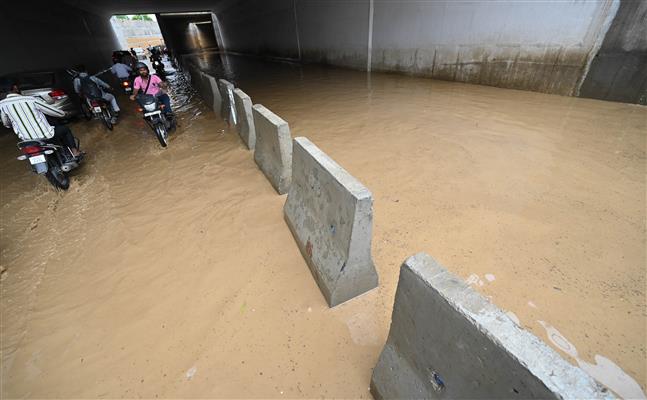 The tall claims of the Municipal Corporation (MC) authorities regarding monsoon preparations washed away after heavy rainfall lashed the city on Thursday. Residents were a harried lot as they had to commute on knee-deep waterlogged underpasses and roads in various parts of the city.

Once again, Buddha Nullah overflowed near Peeru Banda. It was a harrowing time for commuters on a stretch along the nullah, which was flooded. Notably, Buddha Nullah has overflowed many times at this point in the past too, but the civic body has failed to learn any lesson.

In the low-lying areas like New Kundanpuri, located along Buddha Nullah, dirty and sewage mixed water flowed into houses and damaged several belongings of residents. Earlier, residents had complained of waterlogging many times, but to no avail.

Meanwhile, some streets near New Kundan Puri Bridge were also flooded with black coloured water seemingly of Buddha Nullah. Residents said sewer lines of some areas were directly linked with Buddha Nullah. As the Buddha Nullah was swollen after rain, sewage flowed back into streets.

After learning that banks of Buddha Nullah had weakened at few spots, the MC deployed its staff for carrying out repairs today. Residents also raised questions over the role of the MC as sewage removed from the nullah earlier was dumped along the drain for strengthening its banks.

Almost all underpasses in the city were flooded due to rainfall today. Both sides of the newly constructed railway underbridge under the Smart City Mission were inundated after it rained. Moreover, a portion of the underpass road also got damaged.

The situation at a southern bypass underpass near Verka Milk Plant was worst as many vehicles developed snag while passing through knee-deep water on the stretch. This underpass falls under the PWD, but the authorities concerned have failed to resolve waterlogging issue. Traffic movement at an underpass near Chand Cinema was closed due to waterlogging. A resident, Sanjeev Kumar, said the departments concerned should have ensured that there was no waterlogging at these spots.

In several areas, including Panj Peer Road, Moti Nagar, Chandigarh Road, Dhandari and others, sewers overflowed as the MC did nothing to resolve such issues before monsoon.

A resident of Panj Peer Road, Pankaj, said people faced a lot of inconvenience due to waterlogging after sewers overflowed.

Senior Deputy Mayor Sham Sundar Malhotra said, “The MC has made required arrangements for the rainy season. Waterlogging has occurred due to heavy rainfall. Water was drained from most areas after the rain stopped.”

According to the Agrometrology Department of Punjab Agricultural University (PAU), the rainfall recorded on Thursday was highest since 1970.

Five trees were uprooted in different areas after it rained here on Thursday. An official of the MC’s horticulture wing, Kirpal Singh, said two trees were uprooted near Middha Chowk while one tree each fell near ESIC Hospital on Kochhar Market Road, Rose Garden and in the MC Zone C area. The trees fell on wires and on roads. No mishap was reported after trees fell, he said.