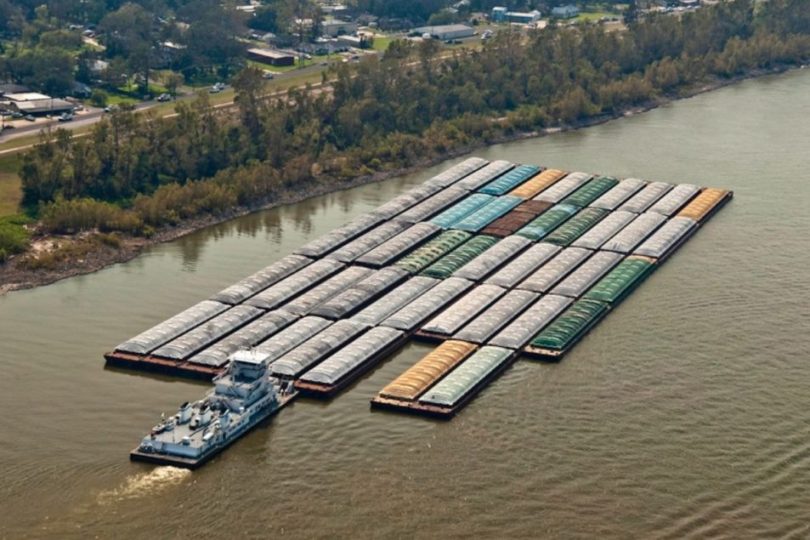 KANSAS CITY, MISSOURI, US — In light of fast-rising shipping costs and the continued impacts from the ongoing US logistics crisis, how exactly are US inland ports helping with the flow of grains and corn?

US inland ports are offering a small ray of hope amidst all the bad news about the state of US shipping. The world of ports and waterborne commerce recently welcomed three new ports to the team — and each is located in the middle of the country.

These ports are important because the vast region they serve always has had a major impact on US exports and for many decades this same region has been one of the important parts of the national economy. More than 600 miles of inland waterways in this region have been a virtual port shadow zone where no federally recognized ports have existed before. The US Waterborne Commerce Statistics Center recently approved three, adjacent Principal US  Ports in the Tri-State (Illinois, Missouri and Iowa) area above Locks and Dam 26 in the heart of the Corn Belt.

The Illinois Waterway (ILWW) Ports and Terminals, the Mid-America Port Commission (MAPC), and the Mississippi River Ports of Eastern Iowa and Western Illinois (MRPEIWI) port statistical areas are referred to collectively as the Corn Belt Ports. Together, the three ports include the core of the largest grain-producing and exporting region in the nation.

“This approval elevated the visibility of our region as a global origin for waterborne commerce,” said Ray Lees, planning program manager at the Tri-County Regional Planning Commission based in Peoria, Illinois, US.

These new federally designated ports on the Illinois and Upper Mississippi Rivers will likely individually rank each year as a Top 50 Principal US Port, and collectively they will be the equivalent of the largest inland port in the nation, based on freight tonnage handled, which is anticipated to be at well over 40 million tons annually.

Since federal port recognition efforts first began to focus on the Upper Mississippi River Basin (UMRB), there have been increased federal, state, and non-profit organization investments in the UMRB, above Locks and Dam 26. This includes investments in both transportation and natural infrastructure for a unique multi-state region designated by the US Congress “as both a nationally significant ecosystem and a nationally significant navigation system.”

It is the only inland river in the United States with this designation. It represents a different way of looking at the value of waterborne commerce, especially since the Upper Mississippi River Basin is an essential part of national and global supply chains.

Under a contract with TransPORT, the Corn Belt Ports coordinate, synchronize and support government agency-related activities for a tri-state are linking Illinois, Iowa and Missouri. The purpose of this initiative is to attract increased direct and indirect investment (including grants) into the region, supporting economic development and sustainability goals.

Amongst and between this group of inland waterway systems, each of the Corn Belt Ports share best business practices with one another. Their common aim is simple and straightforward: to advance infrastructure improvements (including natural infrastructure) across the region.

The original three Corn Belt Ports were created in 2020 and 2021. A fourth Corn Belt Port will soon be launched. The Mississippi River Regional Planning Commission (MRRPC) will establish a regional PSA: The Northern Grain Belt Port (NGBP), situated between Wisconsin and Minnesota. Based on freight tonnage handled it would likely larger than the Port of Miami (Florida).

The MRRPC in La Crosse, Wisconsin submitted a Letter of Intent on April 20, 2022, to the US Waterborne Commerce Statistics Center to form a new PSA. This dedicated PSA is being referred to as the Northern Grain Belt Ports (NGBP) and encompasses 11 riverfront counties between Wisconsin and Minnesota. Red Wing, Wabasha and Winona in Minnesota, and the Wisconsin cities of La Crosse and Prairie du Chien will be included in the new PSA.

NGBP has been functioning for more than 200 years as a port region, but it will be gaining federal recognition like many other significant areas on the inland waterway navigation system. Those others include the Mississippi River Ports of Eastern Iowa and Western Illinois PSA; the Illinois Waterway Ports and Terminals PSA; and the Mid-America Port Commission PSA, each of which has been federally recognized in recent years. The new PSA will consist of seven counties in Wisconsin and four counties in Minnesota. Establishment of this PSA would aid in collecting consolidated data regarding waterway freight terminal volumes and vessel activities, inform regional multi-modal transportation planning, and support the vision of Wisconsin’s State Freight Plan.

Advocates have argued that it helps to ensure that the region maintains a competitive multi-modal transportation system, a strong regional economy, and infrastructure for sustainable water resources.

Just like to each of the other three Corn Belt Ports, the NGBP is designed to support the development of rural and non-rural multi-modal transportation and natural infrastructure. It is centered on an Interstate Highway intersection (I-90) with the Upper Mississippi River (M-35). It aligns with an existing regional planning agency, a Metropolitan Planning Organization, and regional economic development organizations.

Chris Smith, director of operations for the Corn Belt Ports, said “the NGBP will encourage integrated regional transportation planning, and ecosystem restoration and sustainability efforts. The NGBP is very similar in concept to the multi-county Metropolitan Statistical Areas (MSAs) that the US Office of Management and Budget (OMB) in Washington, DC, uses to support federal planning and resourcing decisions. This is a new and more accurate way of looking at things when it comes to transportation data and information.”

Robert Sinkler is a senior adviser with Dawson & Associates serving on the board at the National Waterways Conference. He noted that “the NGBP, along with the three Corn Belt Ports, is a major paradigm shift. It marries the global importance of this multi-state region as an essential part of the national and global supply chains with its ecological importance. There are few people that can bridge the realities of this agricultural commodities-based region with sustainability demands. You can’t invest in or environmentally mitigate for a port that doesn’t exist. The federal recognition is important.”

Each of the three Corn Belt Ports have many similarities, but they also have their unique characteristics. Consider Illinois, which often is referred to as the “Freight Hub of North America.” The state moves 1.2 billion tons of freight valued at $3 trillion annually. Ninety million tons of freight is moved on 1,118 miles of waterways serving the state.  ILWW handles over a third of that (34.4 million tons of freight in 2019), which is more than is handled at the nearby Port of St. Louis.

Illinois accounts for 6% of all US exports and is a top-five exporting state.  Illinois is the top producer and exporter of soybeans in the United States and is second only to Iowa in corn production.

Dan Silverthorn, chairman of the board for Heart of Illinois Regional Port District, said that before the Corn Belt Port on the ILWW was formed, “they don’t know who we are. They don’t know we exist.” This summarizes the situation that all three Corn Belt Ports faced prior to federal approval and ranking in the fall of 2020.

The Corn Belt Ports are a different kind of inland port. First, they are extremely long, linear, narrow multi-modal transportation features; and second, they are both a nationally significant transportation system, and a nationally significant ecosystem.  US policy traditionally has defined an inland “port” as a geographic location, usually identified with a river town or city. Occasionally, a port could also refer to a natural harbor or side channel, or even a wide section of a river with a natural bank or shoreline that was well-suited for loading and unloading ships and boats.

In recent years, the more traditional ways of viewing ports have begun to change, especially as traditional transport systems have evolved. There are two primary reasons that account for this trend:

As a result, functioning ports have evolved into extended infrastructure operations, sometimes reaching 200 miles in length. Each of the three Corn Belt Ports are roughly 200 miles long, include roughly 12 to 15 counties, on US Marine Highway segments (M35 and M55). They are serviced by a series of locks and dams. They also are aligned with existing RPAs, which are responsible for designing road, rail and barge terminal infrastructure and facilities to maximize the value of this integrated transportation network over large areas.

All of the current indicators suggest that Corn Belt Ports will continue to grow in value to bothUS waterborne commerce, and to the national and global economies. A recent Illinois Marine Transportation System planning study points to steady increases in freight tonnage in the Tri-State area above Locks and Dam 26 in the Heart of the Corn Belt. The regional identity and unity of the Corn Belt and its ports and terminals will be important to effectively compete as a regional entity for federal recognition and resources, and market the region to a wide range of investors, businesses, and trading partners.