The U.S. Census Bureau has announced that it plans to begin collecting data on marijuana tax revenue generated by state governments around the country.

The federal agency tracks state tax data as part of quarterly reports it issues to provide benchmark financial indicators and inform economic research. Moving forward, it intends for those documents to include cannabis tax data, it said in a notice set to be published in the Federal Register on Friday.

“Tax collection data are used to measure economic activity for the Nation as a whole, as well as for comparison among the various states,” it said. “We plan to add the collection of cannabis and sports betting sales taxes.”

The Bureau said the new additions will “modernize the survey’s content to maintain the relevancy and sustainability of these data.”

“The information contained in this survey is the most current information available on a nationwide basis for state and local government tax collections,” it said. “The Census Bureau needs state and local tax data to publish benchmark statistics on taxes, to provide data to the Bureau of Economic Analysis for Gross Domestic Product (GDP) calculations and other economic indicators, and to provide data for economic research and comparative studies of governmental finances.”

There are three data collection forms that the Bureau uses to generate its quarterly reports, but it is only planning to make this policy revision to one related to state tax collections that is know as Form F-72. Here’s an example of an earlier version of what that form looks like and how it asks state government officials to break down their revenues into various categories, including alcohol, tobacco, utility, sales and property taxes, among others: 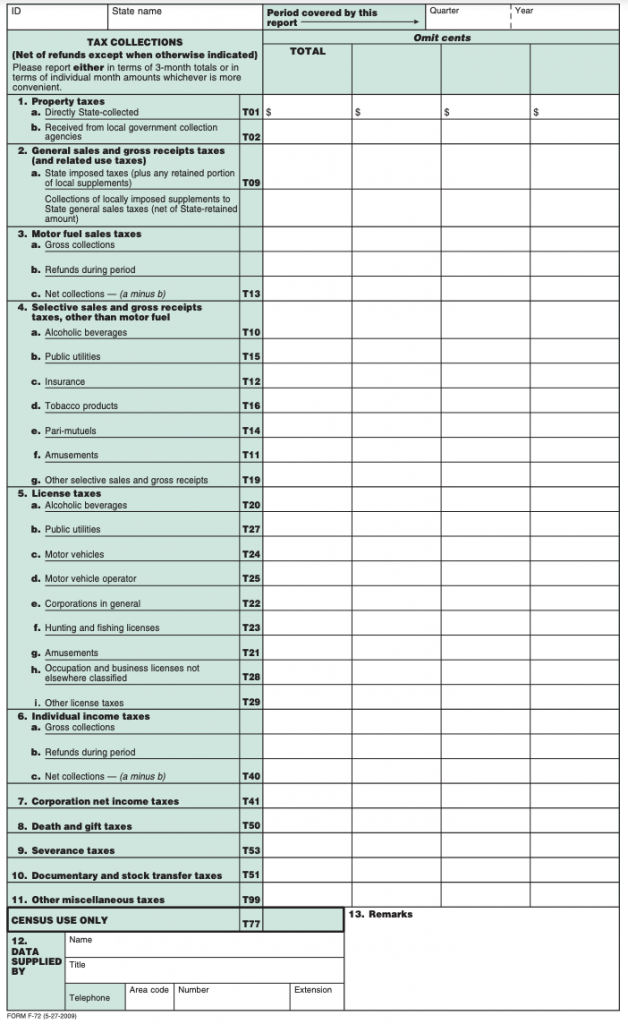 The Bureau will “email letters to each of the 50 state governments and the District of Columbia quarterly requesting their online data submissions or continued coordinated submission through the state government revenue office.”

The resulting quarterly report synthesizes the state and local tax data the agency collects, highlighting the extent to which different streams of revenue fill government coffers. This chart from the third quarter of 2020 shows, for example, regional differences in revenue from taxes on things like alcohol, tobacco, motor vehicles and income: 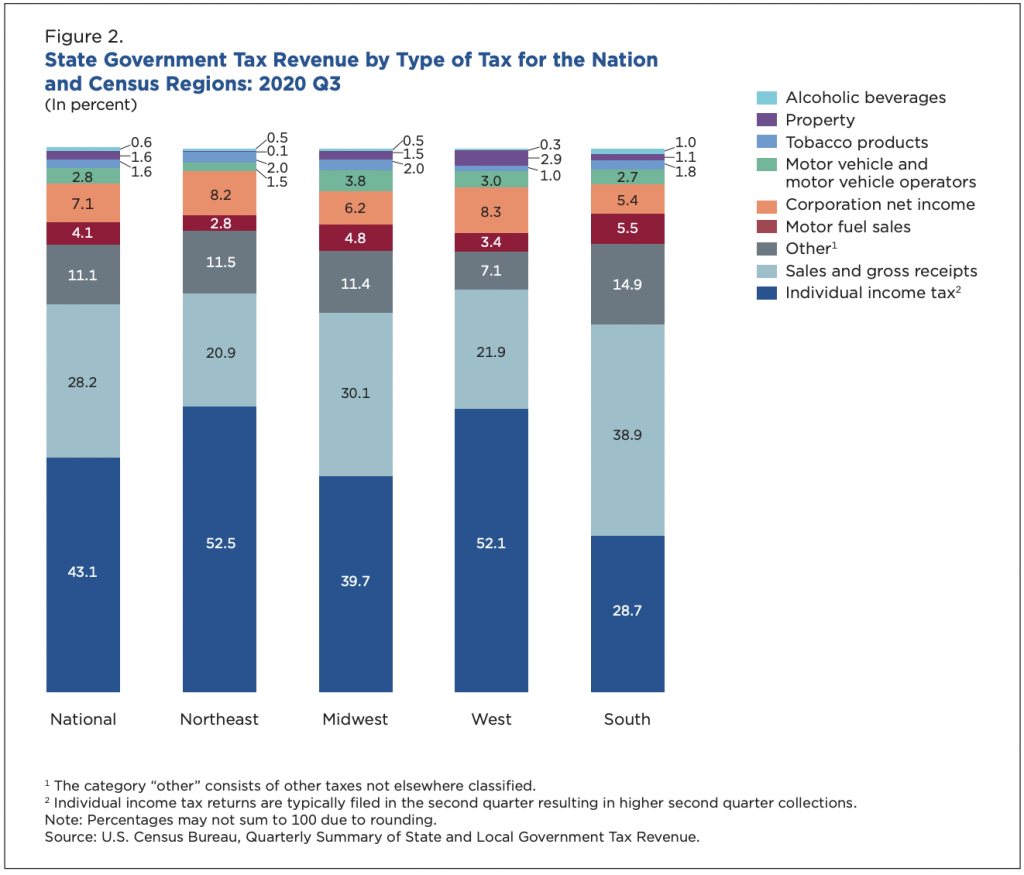 At some point in the future, the Census Bureau wants these forms and charts to include separate categories for marijuana and sports betting.

A public comment period on the proposed change in the agency’s tax collection policy will be open for 60 days following its official publication in the Federal Register. Interested parties can submit written feedback by email to [email protected] or through the Federal e-Rulemaking Portal at https://www.regulations.gov.

“On its face, I think this is a pretty good indicator that federal agencies are beginning to recognize that the cannabis industry isn’t going anywhere, and is in fact a vital—and in most states, essential—part of the U.S. economy,” Morgan Fox, media relations director for the National Cannabis Industry Association, told Marijuana Moment. “If I’m being optimistic, it is a sign that the federal government is preparing for eventual interstate commerce, federal regulation, and international market activity.”

Justin Strekal, political director of NORML, told Marijuana Moment that data “is a good thing and I am hard-pressed to believe that anyone can oppose this sensible modernization in good faith.”

“Now more than ever, we need our policymakers to rely on facts and evidence, not reefer madness rhetoric,” he said. “If a state or locality wisely chooses to regulate a commercial cannabis marketplace, then it is prudent for data collection efforts to acknowledge it just as it does for other aspects of the legal economy.”

Beyond modernizing the data, reporting on state cannabis tax revenue while marijuana remains federally illegal could further demonstrate to lawmakers the economic opportunities that regulating the plant represents.

Even amid the coronavirus pandemic, marijuana markets in states across the U.S. have generated millions of dollars in tax revenue.

In Illinois, for example, the state saw more than $1 billion in cannabis sales in its first year of implementation. And that’s translated into more than $100 million in tax dollars, portions of which are funding social equity grants and substance misuse and mental health treatment.

The governors of states like New York, Pennsylvania and Wisconsin, among others, have all recognized the economic potential of legalization in their calls for reform.

At the federal level, there’s widespread recognition that the current legal status of marijuana has created complications for financial regulators.

To that end, a top official with the Internal Revenue Service recently participated in an informational webinar to discuss steps the agency is taking to help marijuana businesses stay compliant with their taxes under the umbrella of ongoing federal prohibition.

The educational drive also helps to resolve a problem identified by a Treasury Department internal watchdog in April. The Treasury Inspector General for Tax Administration criticized IRS for failing to adequately advise taxpayers in the marijuana industry about compliance with federal tax laws.

Treasury Secretary Steve Mnuchin has brought up the complications caused by the lack of financial services access for the cannabis industry in his calls for a bipartisan legislative fix to the banking issue, noting in congressional hearings that IRS has had to build “cash rooms” to store the deposits.

Legislation to resolve the issue—the Secure and Fair Enforcement (SAFE) Banking Act—repeatedly advanced through the House last session as a standalone bill and part of broader COVOD-19 relief measures, but it stalled in the GOP-controlled Senate. Industry stakeholders are optimistic that the proposal will clear Congress this year, with Democrats now in control of both chambers.

In the meantime, the number of financial institutions reporting that they service state-legal marijuana businesses has declined, federal data released last month shows.

Marijuana Moment is made possible with support from readers. If you rely on our cannabis advocacy journalism to stay informed, please consider a monthly Patreon pledge.