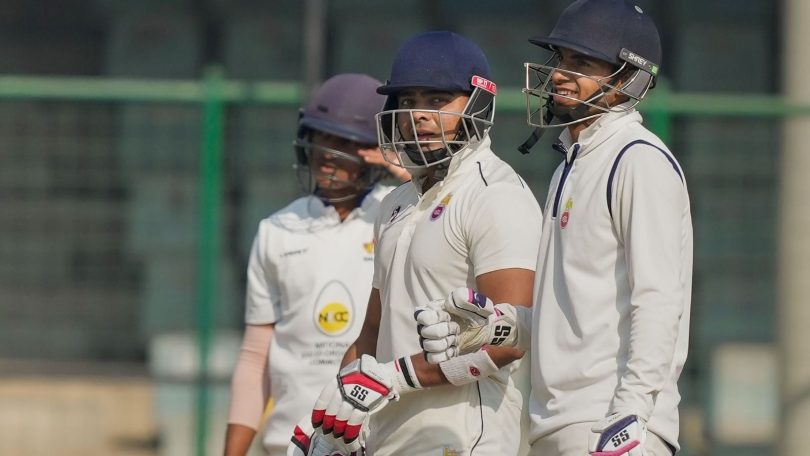 With less than 100 runs required for the win, Delhi, who have so far endured a tumultuous season and are out of the quarterfinal contention, looked eager to bag the victory

It was Delhi’s first outright win over heavyweights Mumbai since the 1979-80 Ranji Trophy final, when Bishan Singh Bedi’s side got the better of Sunil Gavaskar’s team by 240 runs.

Bowling out Mumbai for 293 in the first innings, Delhi took a 76-run lead owing to Vaibhav Rawal’s 114 and skipper Himmat Singh’s 85.

The 20-year-old Mehra, playing only his second first-class game, then gave a masterclass in seam bowling at the Arun Jaitley Stadium as he ran through the much-vaunted Mumbai top-order.

Resuming at 168/9 on the final day, Mumbai’s Tanush Kotian (50 not out) managed to get his half-century before spinner Hrithik Shokeen snared the last wicket with Mumbai managing to score 170 in their second essay.

With less than 100 runs required for the win, Delhi, who have so far endured a tumultuous season and are out of the quarterfinal contention, looked eager to bag the victory.

Opener Anuj Rawat (14) slammed two boundaries and a six in his four-ball innings. Vaibahv Sharma (36 ) and Hrithik Shokeen (36 not out) then put up a 69-run stand, hitting nine fours and two sixes between them.

With Sharma getting out in the 16th over, former skipper and IPL specialist Nitish Rana, who was added to the squad on the eve of the match, walked to the middle and sent the very first delivery he faced for a six, to seal Delhi’s win.

The loss has affected the Ajinkya Rahane-led Mumbai’s chances for a quarterfinal spot.

In the other matches in the group, spinner Lalith Mohan, who had a five-for in the first innings, grabbed a six-wicket haul (6/58) in the second essay as Andhra beat Saurashtra by 150 runs, while Tamil Nadu claimed and innings an 70-run win over Assam.