Valenciaport has positioned itself as a benchmark in the relationship between the port and the city, favouring the harmonisation of the port environment to make it closer to the city with milestones such as the transfer to the city of the Balcón al Mar in 2013 or more recently the Special Plan of the South Zone 1 for the Nazaret area. The Port Authority of Valencia (PAV) has been invited by the World Bank to present its good practices in the port-city relationship, digitalisation and decarbonisation as an international reference in the framework of the “Green Transport in Turkey” programme held in the city of Izmir (Turkey).

The head of Strategic Planning and Innovation of the PAV, Juan Manuel Díez Orejas, explained at this forum that “our management model is oriented towards dialogue and the search for initiatives that develop the complementarity of the Port and the City”.

In this regard, it is worth highlighting the creation in 2015, at the proposal of the President of the Port Authority of Valencia, of the Advisory Committees of the ports of Valencia, Sagunto and Gandía. These bodies are chaired by the mayors of each of these cities and are integrated into the Delegate Commission of the Council for the Promotion of Territorial Integration with the aim of effectively promoting the resolution of the issues that each city faces and reaching a consensus on city-port integration actions. Furthermore, in the case of Valencia, it is worth highlighting the agreements between the City Council and the Port of Valencia in 1986, 1997, 2013 and 2018.

The result of this collaboration is the 2019 agreement on the Special Plan for South Zone 1, which will provide the Nazaret area of the city with new green, tertiary and sports spaces, with the location of the Levante UD sports city, an action that will boost the economy of the area and the urban and social regeneration of the neighbourhood. This plan is of great importance for the relationship between the city of Valencia and its port, given that it contemplates the dedication for public use of an area of 230,000 square metres of port land equivalent to more than 40 football pitches. 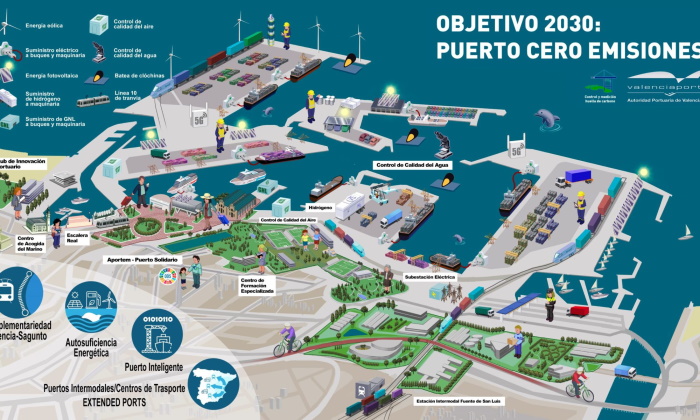 During his presentation at the forum held in Izmir, Díez Orejas also highlighted the agreement between the APV and the city council of Valencia in 2013, where the Port of Valencia ceded 1,200,000 square metres in the northern part of the port area for the use of the public. 600,000 of them for the America’s Cup and another 600,000 for the Balcón al mar.

In the case of Sagunto, the opening to the public of part of the port area, in the northern part of the port, has been contemplated. The works for the project “New promenade in the northern part of the Port of Sagunto” have already been executed by the firm COMSA for an amount of 5,523,650 euros. 5,523,650. In relation to Gandia, work is progressing in two areas, one of them between the fruit sheds from 5 to 17, and the space located between its southern façade and the boundary of the commercial port area, and between the northern façade and the breakwater. The other area includes the Lonja building and square, and the platform to the south of the Sant Nicolau church.

Other actions based on innovation and sustainability

The head of Strategic Planning and Innovation has indicated that Valenciaport “is an asset for the development of the city in two key aspects of present and future: the energy transition and decarbonisation, and the promotion of innovation and digitalisation to create jobs with high added value and attract talent”.

In terms of environmental sustainability, the head of Valenciaport explained in this forum promoted by the World Bank the actions being carried out by Valenciaport in its goal of zero emissions by 2030. Among them, he pointed out initiatives such as the use of hydrogen in port operations, which makes the Port of Valencia a pioneer in Europe in the use of this clean energy, the projects to install photovoltaic plants in the València and Gandia sites, and the promotion of rail connections to take containers off the road.
With regard to technological transformation, initiatives such as OPENTOP, the open innovation centre for the port logistics sector that will serve as a lever to attract talent and develop innovative ideas and solutions for the sector; or the Ports 4.0 Fund, coordinated by Puertos del Estado together with the other Port Authorities, which is the largest support fund for open innovation in Europe, should be highlighted.
Díez Orejas also explained that Valenciaport is working on other actions that favour the city-port relationship, in areas such as digitalisation and interaction through Smart City and Smart Port tools in areas such as mobility, environmental protection and security.
He also recalled that Valenciaport is working with the Generalitat, Diputació de València and the City Council on a cruise offer that reaches more municipalities and positions Valencia as a place with multiple and varied activities that facilitates mobility and avoids saturation of the destinations.
Source: Port Authority of Valencia