Valenciaport The Port Authority of Valencia (PAV) has awarded the company Electromur S.A. the contract for the installation and maintenance of the solar energy plant to be located in shed 4 of the Port of Gandia. The project has a capacity of 990 MWh/year, and will make the port of Gandia the first European port to be energy self-sufficient. The amount awarded for the construction and maintenance of this initiative is 1,697,476.33 euros, VAT included.

The Port of Gandía will have a photovoltaic energy plant for self-consumption, whose solar energy collectors will be located on the roof of shed 4, with a floor area of 4,500 square metres, and electrical energy storage equipment will also be installed. The construction of the solar power plant will take 8 months and the maintenance period will be 52 months. 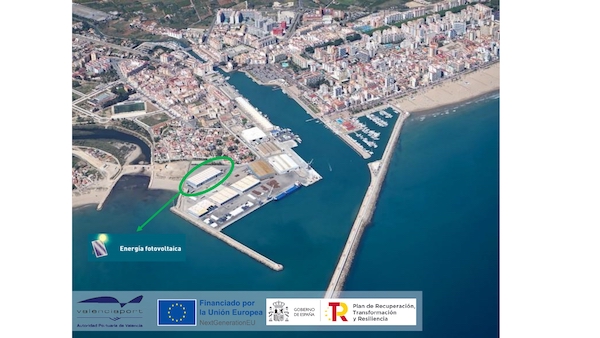 This project is financed by the European Union’s Next Generation funds and the Spanish Government’s Recovery, Transformation and Resilience Plan.
In addition to this photovoltaic plant in the Port of Gandia, Valenciaport plans to install two other solar power plants in the Port of Valencia, one of them in the Valencia Terminal Europa car silo, and the other between the Príncipe Felipe dock and the Club Náutico de València. Both are already in the tendering process and will enable the Valencian precinct to produce 14% of the electrical energy it needs.

The Port Authority is earmarking 130 million euros in sustainability actions to meet the strategic objective of Valenciaport 2030 zero emissions, which will reduce dependence on fossil fuels and promote energy autonomy. In addition to these solar projects, there are other initiatives such as the installation of wind turbines in the Port of Valencia, the construction of two electrical substations to connect the engines of ships docking at the Valencian precinct to the electricity grid, the use of hydrogen in port activity and the commitment to the railway in the ports of Sagunto and Valencia, among other actions.
Source: Valenciaport