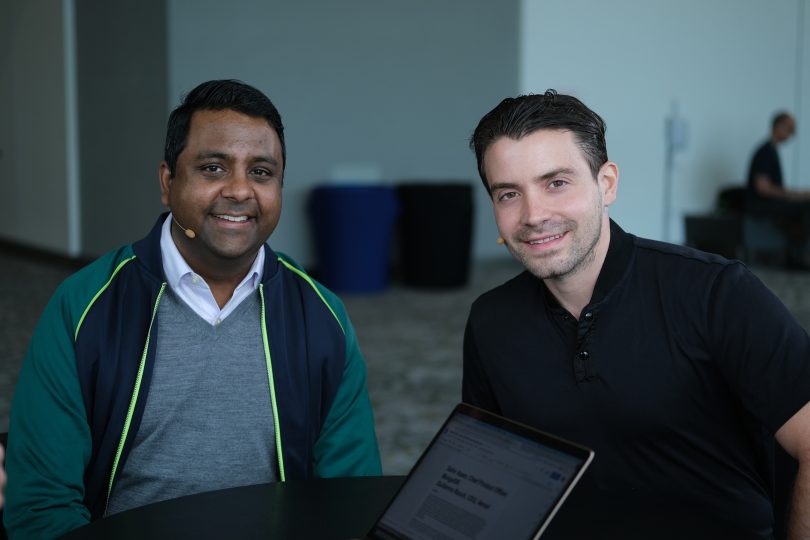 With serverless computing being a hot topic, developers are leaning toward this architecture for enhanced scalability, flexibility, performance and innovation.

By merging Vercel Inc.’s serverless front-end infrastructure with MongoDB Inc.’s developer data platform, developers avoid dealing with a cold start because they get the best of both worlds, which enhances web performance, according to Guillermo Rauch (pictured, right), chief executive officer of Vercel.

“The idea is a global app in seconds,” Rauch said. “We give you all the necessary tools to start your application, not infrastructure primitives. In practice, this means you host it in a Git repo, import it to Vercel, and install the Mongo integration. Now your front end and data back end are connected, and your application just goes global in seconds.”

Slow web performance is ‘the new down’

If friction happens in the infrastructure, slow web performance becomes inevitable, and this dents customer experience, according to Azam.

“Slow is the new down,” he noted. “If somebody has a slow experience, they’re going to leave your site. It’s really maintaining that fast performance [that’s critical].”

By providing a serverless platform, Rauch believes Vercel abstracts the complexities away for front-end developers.

“So we built Next.js, which is the most popular React framework in the world,” he pointed out. “This is what front-end engineers choose to build innovative UI’s and beautiful websites. Companies like Dior, GitHub, TikTok, and Twitch are powering their entire .coms or all of their new parts of their .coms with Next.js.”

A serverless platform eliminates all the heavy lifting when developing an application, according to Azam.

“If you’re building a new application or want the ability to scale seamlessly and not have to worry about any of the plumbing, serverless is clearly the easier model,” he said. “This is why we leaned heavily on investing in Atlas serverless.”

Since innovation is vital for developers, Azam believes the Vercel-MongoDB partnership presents the cutting-edge tools needed for better insights.

“Developers are constantly looking for ways to focus on innovation and the business logic that defines their application as opposed to managing the plumbing and management of infrastructure,” he explained. “That’s what led us to partner with Vercel, the bleeding edge of developers.”

By exposing the underlying APIs, Vercel provides developers with enhanced observability, according to Rauch.

“We give you performance analytics in real time to see how your front end is performing,” he said. “We give you statistics about how often you’re querying your back end, cache hit ratios, and so on. It’s not just about throwing more compute at the problem, but the ability to use the edge to your advantage to memorize computation and reuse it across different visits.”

Since the growth speed in the digital economy is at times unpredictable, Vercel renders an architecture that handles changing business dynamics and prevents a website from crashing, according to Rauch.

“We have customers in the e-commerce space;  they do a drop, and they’re piggybacking on serverless to give them that ability to instantly scale,” he pointed out. “We see that a lot with the Web3 space and NFT drops, where they’re building in such a way that they’re not sensitive to these massive fluctuations in traffic. We’ve put in so much work together behind the scenes to support it.”

Here’s the complete video interview, part of SiliconANGLE’s and theCUBE’s coverage of the MongoDB World event:

(* Disclosure: TheCUBE is a paid media partner for the MongoDB World NYC event. Neither MongoDB Inc., the sponsor for theCUBE’s event coverage, nor other sponsors have editorial control over content on theCUBE or SiliconANGLE.)