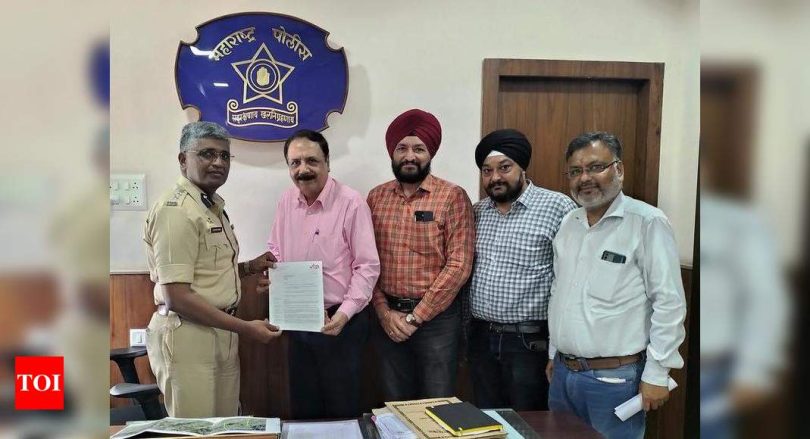 Nagpur: A delegation of Vidarbha Taxpayers Association (VTA) recently met DCP (Traffic) Sarang Awad to raise issue of traffic congestion at Rajiv Gandhi Square, Wardha Road, and on Rail Boulevard Square at ROB near Ajni Railway Station.
VTA secretary Tejinder Singh Renu pointed out that many two wheeler riders are taking the wrong side for almost 100 metres after crossing Rajeev Gandhi Square on Wardha Road to reach RTPS Road from FCI Godown. This is not only hindering traffic coming from the airport side but can also lead to serious accidents. This can be avoided by simply closing the divider on Wardha Road at this T-point,” said Renu. Two wheeler riders will have to take an alternate route to reach RTPS road.
The delegation, led by vice-president of VTA Hemant Trivedi, also submitted a memorandum and map of the areas.
Trivedi said MS Bars installed on the approach roads on both ends of Ajni ROB to prevent heavy vehicles from using the bridge are actually stalling the traffic. These MS bars be removed and overhead barriers be installed to restrict heavy load traffic, he demanded.
VTA’s joint secretary Rajesh Kanungo raised the problems faced by transporters as heavy vehicles are being getting challaned for using Bhandara Road passing through Pardi area. Traffic police had issued a notification issued June 6 in this regard following request by GDCL-SSIM, contractor engaged for Pardi flyover work. “But truckers aren’t aware. No cop stops the truck, there is no signage displaying no entry. Cops take pictures of trucks and the challan is sent after a few weeks. By then the same truck might have passed through the stretch several times and issued more challans,” said Kanungo.
Amarjeet Singh Chawla, joint secretary, pointed out the illegal parking on the service road on Bhandara Road.
DCP Awad said that the divider at Rajiv Gandhi Square can be closed on experimental bais for a few days. On Ajni ROB issue, he said height barriers have been damaged many times and the need of the hour is to contruct new ROB. He also said heavy vehicles have been permitted at Pardi in the night when rarely any construction activity is seen.