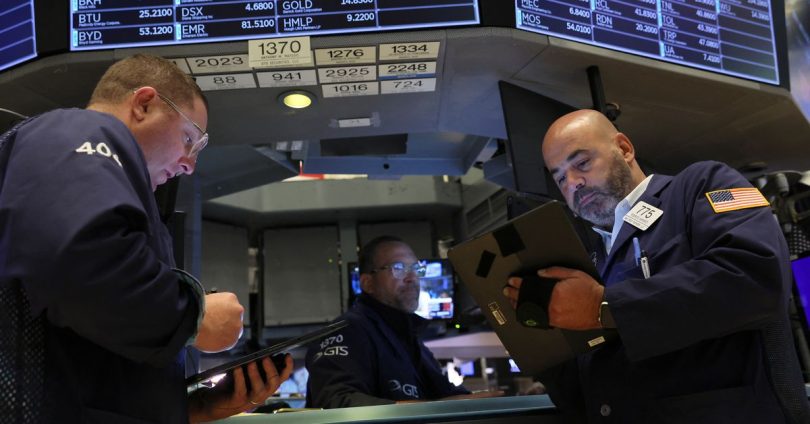 Indexes bounced back and forth in a choppy trading as concerns over Federal Reserve’s next steps to tame a surging inflation remain.

“There’s just a lot of uncertainty and I think people aren’t going to really make up their minds for longer than five minutes or five seconds, you know, until there’s a little bit more clarity or light at the end of the tunnel,” said Grace Lee, an equity income senior portfolio manager at Boston-based Columbia Threadneedle Investments.

Money market traders see 87% odds that the Fed will hike rates by 75 basis points at this month’s meeting.

Federal Reserve Chair Jerome Powell said the central bank is “strongly committed” to bringing inflation down and needs to keep going until it gets the job done. read more

Chicago Fed President Charles Evans joined his fellow policymakers in saying that reining in inflation is “job one.” read more

Investors are also awaiting the U.S. August inflation report next week for fresh clues on whether the Federal Reserve will hike rates by half or three-quarters of a percentage point at the next policy meeting due Sept. 20-21.

Meanwhile, data showed the number of Americans filing new claims for unemployment benefits fell last week to a three-month low, underscoring the robustness of the labor market even as the Fed raises interest rates. read more

With increasing odds of another outsized rate hike, both the rate-sensitive S&P 500 bank index (.SPXBK) and the S&P 500 healthcare sector rose 2.8% and 1.8%, respectively.

The healthcare sector (.SPXHC) was boosted by news that Regeneron Pharmaceuticals Inc’s (REGN.O) anti-blindness treatment Eylea was shown to work as well when given at a higher dose at a longer interval between injections. The drugmaker’s shares jumped 18.8%. read more

American Eagle Outfitters Inc (AEO.N) tumbled 8.7% after the apparel maker missed second-quarter profit estimates and said it would pause quarterly dividend as it fortifies its finances against a hit from inflation. read more

Volume on U.S. exchanges was 10.19 billion shares, compared with the 10.37 billion average for the full session over the last 20 trading days.

On Wednesday, Wall Street’s main indexes climbed the most in about a month as bond yields retreated after a recent surge that was driven by expectations of higher interest rates. Still, the benchmark S&P 500 (.SPX) is down over 16% year-to-date.

Advancing issues outnumbered declining ones on the NYSE by a 1.34-to-1 ratio; on Nasdaq, a 1.48-to-1 ratio favored advancers.