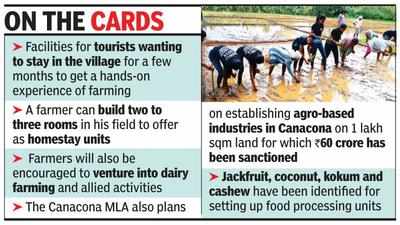 PANAJI: So far, off Goa’s coast, coral reefs were well-recorded only in Grande Island and Bat Island, which attract hundreds of snorkeling enthusiasts and tourists each year. But, now, for the first time, patchy coral reefs have been recorded off the coast of Terekhol in Pernem taluka, by researchers from the National Centre for Polar and Ocean Research and the ICAR-Central Coastal Agricultural Research Institute. The coral reefs have been found distributed in an area of around two square kilometers at a depth of four to five meters, with reef building coral species and a good amount of fish diversity as well. “The patchy reef at Terekhol is comprised by more than seven genera/species of hard corals and two-three soft coral species and is dominated by a reef building Turbinaria mesenterina (Dendrophylliidae), which is considered as a sediment tolerant coral species and hence is a spatially dominant coral species in the nearshore rocky environment,” the study states. Contemporary corals are believed to have emerged nearly 240 million years ago and are among the most threatened and vulnerable ecosystems on the earth. As such, the researchers G B Sreekanth, B S Ingole, B Pednekar and E B Chakurkar, have called for limiting the anthropogenic activities in and around the ecosystem newly discovered in Terekhol. “The major anthropogenic threats in this region include pollution from domestic sewage, overexploitation of the sand and silt from the estuarine stretch, reclamation of mangrove zones, and sedimentation in the river stretch and coastal areas. These could cause deleterious impacts on the coral reef patches, which are situated very adjacent to the coastline. Therefore, the management of these anthropogenic stressors require urgent attention to protect the reef and the estuarine ecosystem,” the researchers have said. Additionally, coral reefs also face high extinction risk due to changing climatic conditions, they state in the study, which was recently published in the Indian Journal of Geo Marine Sciences. Presence of a high number of fish species, algae and other invertebrates near the small Terekhol coral reef patches also indicates that it provides a functional niche, and serves as a feeding and breeding grounds for important reef fish species, the study states. “The discovery of patchy coral reefs with fish biodiversity in northern Goa is very significant, considering the increased pressure from the coastal infrastructure development for land reclamation. Fishery in the area (both estuarine and coastal fishery) is dwindling, and there is a significant reduction in total annual fish catches. Coral reefs provide the necessary breeding and nursery grounds for edible and ornamental fishes,” reads the study. Sreekanth, Ingole, Pednekar and Chakurkar have, therefore, said that, if managed properly, these coastal shallow water patchy reefs can help in reviving the local fishery and general biodiversity of the region. Terekhol, they said, is already facing a threat from sand mining and sand erosion. “It is therefore recommended conducting a detailed underwater survey of the area to understand the extent and status of patchy coral reefs and map the biodiversity of the area using a GIS platform. Further studies are required to prepare a coral reef monitoring and management plan,” the researchers have stated.