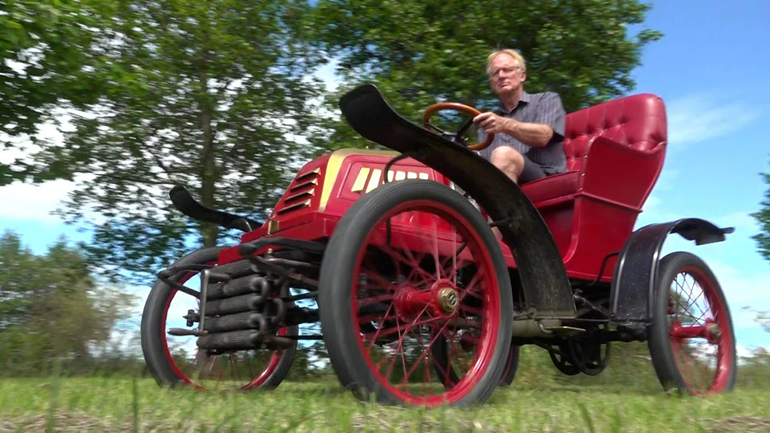 63-year-old Tony Prebensen loves hanging out with his old friend Holley, even though she’s a lot older than him. That’s because Holley is a 119-year-old vintage car, which he believes is one of only five Holleys left in the world.

“I have hit 50 kilometres an hour, and it’s about terminal velocity. It’s done about 4000 miles, probably further than it ever did when it was new. And it’s certainly more than any other of the four Holleys I know of in the world,” said Prebensen.

With a full tank and the right weather conditions, the Holley can go as far as 130km and as fast as 50km/h.

The Holleys were made in 1903 by the firm that now makes Holley Carburettors, but this one came to Tony in various parts.

Living on a farm in Puketapu, Napier, Prebensen is a retired secondary school teacher and has been interested in old cars since a young age.

His mission started in 2005 when he got the Holley engine from Napier’s Faraday Centre.

“It had Holley cast on the front of the engine. It was all I knew.”

After digging online, Prebensen received more detailed information from the Horseless Carriage Club in America, and a lucky break.

“They sent a whole lot of information. I opened it up and found that the Holley car had the same gearbox my father had bought 30 years earlier at an estate clearing sale. It’s an Upton gearbox.”

The exact right engine was in the same garage. For Prebensen, it was like winning the lotto. Then he started to look aound the world for other parts.

“The carburettor was an interesting one. I put a picture of it in a car club magazine, and everybody laughed and said, ‘You’d be dreaming of finding one’.”

Then he received an email from Cape Town, South Africa.

“The guy from South Africa wrote, ‘You’re not going to believe this, but I’ve got one of those carburettors’.

“It was precisely the right size and the right one for the car.”

With a pile of parts and countless hours of work, Tony rebuilt the entire car from scratch. He said it was enormously satisfying when all the pieces came together.

“I can’t claim it’s an original car found in a barn somewhere. It’s as close as possible as it would have been when it came out of the Holley Factory in 1903.”

Tony’s love of cars was instilled in him from an early age by his father.

“Some people spend time on the golf course. I spend time in my workshop making cars. I will never sell my cars and will have them forever.”

Now, history is repeating with the next generation.

“My four-year-old grandson is keen on cars. He can tell you all about all my cars. And so, hopefully, he will carry on and learn how to drive and maintain these unique things.”

The Holley will attend a vintage car event in Dannevirke this weekend, where locals will have an opportunity to have a closer look.

On Saturday at 9.30am, there is a rally along High Street from York St to “a mystery destination”, and Holley will be one of many cars on display at Hall Street on Sunday from 9am.