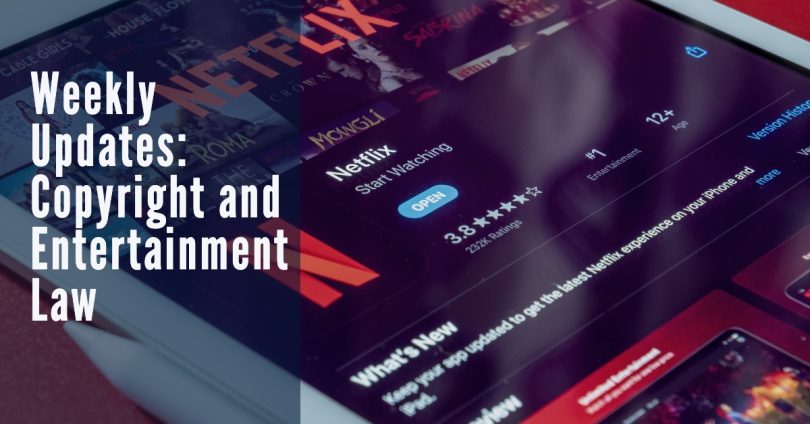 This is a weekly post on copyright and entertainment law updates.

An Uttar Pradesh-based lawyer has recently instituted a suit against the Indra Kumar, the director of the film ‘Thank God’, and the actors Ajay Devgan and Siddharth Malhotra, stating that the upcoming movie is likely to hurt religious sentiments. The suit was filed after the trailer of the film depicted Ajay Devgan portraying the Hindu deity Chitragupta, and allegedly using foul and objectionable language.

In the copyright infringement suit initiated by tattoo artist Catherine Alexander, against the creators of the videogame ‘WWE 2K’, internationally renowned wrestler Randy Orton is scheduled to appear as witness in the trial before the United States District Court for Southern District of Illinois, on 26 September 2022. The suit was initially instituted by Alexander alleging that the defendants had not obtained the requisite permissions for displaying the tattoos she drew on Orton, in the wrestler’s in-game avatar in the popular 2018 video game WWE 2K. The decision in this case is likely to have a significant impact on the rights of tattoo artists over digital representations of their works.

Author of the Bestselling book, ‘I Hunt Killers’, Barry Lyga, has sued prominent media houses Warner Brothers Television and Fox Broadcasting, for allegedly stealing and misappropriating ideas from the book. Lyga has also stated that Warner Bros. optioned his book prior to publication, and then three years thereafter, declined to continue the arrangement. One year after the author registered the copyright over the book, he noticed the series ‘Prodigal Son’ was released by Warner Bros. and Fox, which allegedly steals the premise, the motif and the characters, sequence of events and several other elements from the book.

Paula Hian, an internationally renowned designer, has sued Luis Vuitton for allegedly stealing some of her designs. In 2020, Hian had interacted with executives from the brand, but the parties were unable to strike a deal. Sometime later, the designer found her designs featured on several pieces of the fashion giant’s clothing. The designer has now accused Louis Vuitton for copyright infringement, claiming that there is substantial similarity between the designs she has created and those which are used by Louis Vuitton.

This Copyright and Entertainment Law News Bulletin is brought to you by the Copyright and Trademark Division of BananaIP Counsels, a Top ranked IP Firm in India. Led by Sanjeeth Hegde, BananaIP Counsels’ trademark attorneys are among the leading experts in the field. If you have any questions, or need any clarifications, please write to contact@bananaip.com with the subject: Copyright News.

Please note that the news bulletin has been put together from different sources, primary and secondary, and BananaIP’s reporters may not have verified all the news published in the bulletin. You may write to contact@bananaip.com  for corrections and take down.