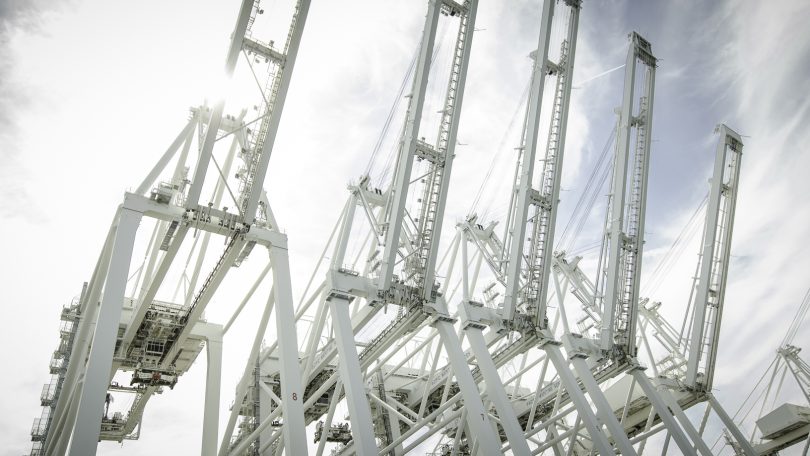 The West Coast was the destination of choice for Asian exports in early 2021, before container ship queues stymied Southern California ports.

Less than two years later, the pendulum has swung in the opposite direction.

Volumes have been redirected via the Panama Canal due to fears of West Coast port labor strife and peak-season congestion in California that never materialized. East and Gulf coast ports now boast significantly more imports than West Coast ports.

Data from McCown Container Volume Observer released Thursday confirms that U.S. imports remain near all-time highs. Imports to the top 10 ports totaled 2,165,939 TEUs in August, the fifth-highest monthly tally on record. August was flat year on year (y/y) and up 3% versus July.

Imports to the top West Coast ports totaled 978,844 TEUs in August, down 11.5% y/y, weighed by a 17% plunge at the Port of Los Angeles (partially driven by cargo switching to Long Beach due to a union issue at one LA terminal).

Imports to the top East and Gulf coast ports totaled 1,187,095 TEUs last month, up 12% y/y. These ports “had a blowout month with their largest volumes ever,” said McCown.

To analyze the coastal shift over time, McCown looked at the three-month trailing average of the y/y change by coastline. This data shows the latest shift toward the East and Gulf coasts began in the second quarter of 2021. Upside versus the West Coast has remained high throughout 2022. As of August, the three-month y/y change for the West Coast was minus-5.1% compared to plus-8.5% for the East/Gulf coast ports.

Including all three coasts, there was a peak of just over 150 container ships waiting off North America in January — mostly off the West Coast — and a similar number in late July, this time mostly off the East and Gulf coasts.

The biggest queue in recent months has been off Savannah, Georgia, with over 40 container ships waiting on some days. On Sept. 13, Georgia Ports Authority Executive Director Griff Lynch said the number of waiting ships would “dwindle” over the following six weeks.

American Shipper surveyed ship-position data from MarineTraffic and official California queue lists on Thursday morning. The survey found that the North American queue total has pulled back to 116 ships, 22% below highs in late July.

Savannah was down from its peak but still had the largest queue, with 29 ships waiting. Houston has not improved, with 23 container vessels still offshore. The other recent hot spot — New York/New Jersey — was down to 13 ships on Thursday morning; it had recently been in the 20s. Meanwhile, the queue off Virginia —  composed of ships waiting to get into Norfolk or Baltimore — had worsened and was up to 13 ships.

Altogether, only 24% of waiting ships were off the West Coast on Thursday morning, highlighting the extent carriers have shifted to the other coasts.