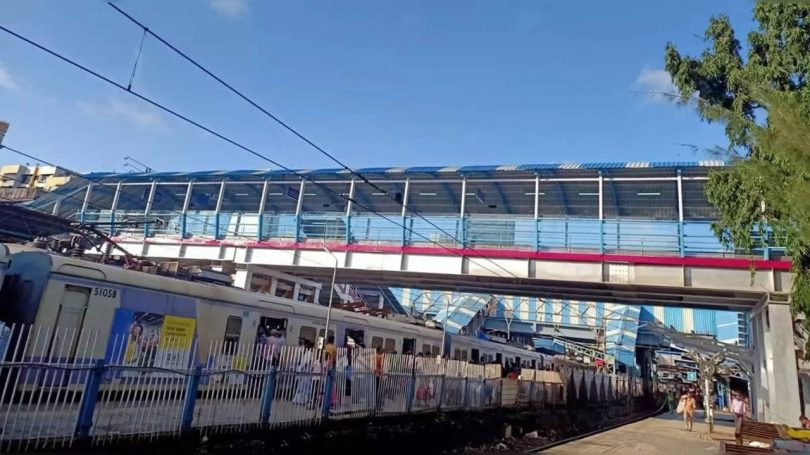 : The Western Railway of Mumbai’s Dadar station’s foot over-bridge (FOB) construction was finished on Monday. The Mumbai Rail Vikas Corporation (MRVC) says that users of platforms 1, 2, 3, and 5 as well as the current East skywalk will benefit from the new FOB.

The new FOB is 8 metres wide and 58 metres long overall.

“The staircase for Platform No 4 could not be constructed due to the rains as foundations are close to the running track. Post-monsoon the staircase work will be taken up and it should be ready in two months,” the MFVC said.

Take a look at Hyderabad’s new 3D Foot over Bridge; facility to be opened soon

The estimated cost of the project as a whole is Rs 8 crore. Construction of the FOB began in December 2021.

According to estimates, Mumbai Suburban Railway’s Dadar station is the busiest station. For commuters who wish to travel the Western and Central train routes, it serves as the changeover station.

At Andheri, one of the busiest stations on the WR’s suburban line with an estimated 3.15 lakh daily visits, Western Railway (WR) had introduced a new skywalk in August.

“The skywalk connects the more recent south-end foot over bridge (FoB) to the more traditional south FoB. According to a WR official, installing a second walkway will help relieve traffic congestion on the old south FoB for vehicles going from Andheri’s west to east side.

According to representatives from the engineering department, eight FoBs, including the new skywalk, have been formally launched along WR’s Mumbai suburban stretch so far this fiscal year.

“Currently, WR has a total of 141 FoBs between Churchgate and Dahanu Road for the convenience of passengers and to curb trespassing,” said an official.