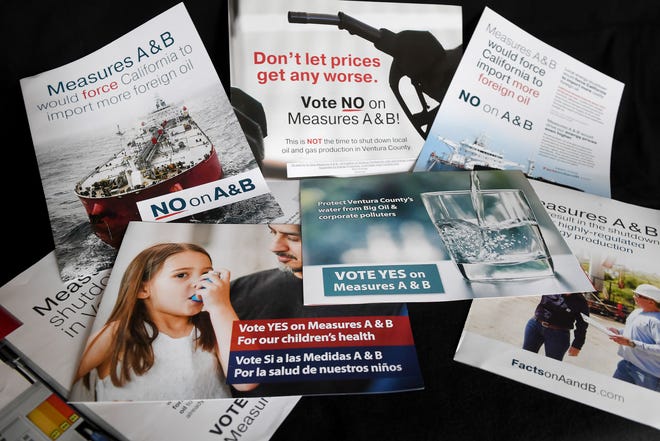 As oil companies tell it, passage of measures A and B on the June 7 ballot would end all oil and gas production in Ventura County along with thousands of jobs.

The environmental group leading the “yes” campaign warns that the drilling could contaminate drinking and irrigation water if the oil interests prevail in their multimillion-dollar campaign.

The measures, however, are more complex and less sweeping than the roadside signs suggest:

The Star interviewed several experts, analyzed the county’s permit inventory and dug through dozens of boxes of documents tracing the county’s oil development back almost 75 years.

The old permits are typically just two or three pages listing basic safety and sanitation requirements. Some are typed on fragile onion skin paper. Some are copies made on mimeograph machines.

“When I first heard of it decades ago, I went, this isn’t right,” said Steve Bennett, a former county supervisor who spearheaded the move to update the antiquated permits. “When I was told you couldn’t do anything about it, I thought we should at least try it.”

Oil and gas development is the only known industry still operating under decades-old permits with outdated standards, county planners said.

The permits are held by some of the industry’s biggest players, including Aera Energy, which has largely funded the $8.2 million campaign to defeat the measures.

The company, which is jointly owned by affiliates of ExxonMobil and Shell, has contributed $7.4 million to the effort. Oil interests have outraised the other side by more than 10 to 1 in what has become the costliest ballot measure in county history.

Aera officials declined to answer questions on the permits or why they are investing heavily in the campaign. They referred questions to the campaign spokesman, Ben Oakley of the Western States Petroleum Association, who said the funds help get their message to the voters.

Aera holds six permits approved from 1948 to 1956 that granted authority to produce oil and gas, according to a recent lawsuit the company filed against the county. The permits gave them broad permission to drill without any expiration date, the company said.

Aera and its predecessors have invested hundreds of millions of dollars over decades in an oil field north of Ventura where drilling is regulated under the old permits, according to the lawsuit.

The decades-old permits typically require far fewer conditions than modern permits. They have no limit on the number of wells or requirements for local environmental review.

Holders of the outdated permits can get drilling projects approved with relatively simple zoning clearances that cost as little as $330 and typically take four to six weeks to process. The decisions require no review by a planning director or higher authority and happen largely out of public view.

New drilling proposals under the old permits would likely trigger a much more in-depth review to update the permit if the measures pass. The cost would range from several thousand dollars to more than $100,000, depending on consultants’ fees. It could take as little as a few months or as long as a few years.

Aera’s request to drill eight wells and install electrical equipment in 2014 illustrates the difference between the two review processes.

County planning staff approved the proposal based on conditions in the company’s 1948 permit that has no expiration or well limit and some basic safety requirements that were added later.

In contrast, a modern permit the county planning commission recently renewed for the Carbon California Co. came after a public hearing and contained dozens of conditions to continue drilling north of Fillmore. They included requirements for landscaping, noise mitigation, wildlife protection, dust control and secure fencing.

No new wells were allowed under the permit, which expires in 10 years.

Hundreds of wells under the aged permits dot the county from the Ventura coastline to Simi Valley.

Vintage Production California, for example, operated in the Grimes Canyon area just south of Fillmore under a 1949 permit. No modifications had been made to the permit in the more than 60 years since it was approved, according to the company’s 2014 request to drill a new well.

The permit allows the company to extract oil and gas and install pipelines, imposing conditions typical of that era: notify the county if the permit is transferred to another operator; secure a producing well within a year; restore the land if wells are abandoned; have fire-fighting equipment on hand and keep toilet and washing facilities clean.

The county’s definition of “antiquated” is not limited to the permit’s age, but also whether the permits specified the number of wells and locations.

Planning officials said the county has never done an across-the-board audit of its hundreds of oil and gas permits and won’t if the measures pass.

Instead, county planners would evaluate permits case-by-case to see if the new requirements would apply to a proposed development, said Dave Ward, the county’s planning director.

What you need to know:Ventura County’s June 2022 primary election

Measures A and B grew out of two land-use amendments that county supervisors approved on a 3-2 vote in November 2020.

They called for a single, consistent permitting process and some level of environmental review for all new oil and gas development proposals, regardless of the age of the permits.

Within days, opponents started collecting voter signatures to stop the rules from taking effect until the electorate decides the issue.

Bennett, now a state assemblyman, said he pushed for the change as a matter of fairness and common sense.

“It ends a loophole that allows the oldest oil fields in the county to avoid following the same rules all other fields have to follow for new wells,” he said.

To Bennett, it’s only logical to apply modern ideas to aged permits as technology and knowledge improve. He considers it a “gross inequity” to require modern environmental review and expiration dates for wells drilled under new permits but not the antiquated ones.

The supervisors approved the amendments after county attorneys determined property owners’ vested rights did not apply to new wells built under the old permits.

Oakley, the oil spokesman, said the measures and other county restrictions would stymie the industry’s efforts to expand production in the face of declining reserves.

Oakley contended that all wells are already held to high health and safety standards set by other agencies. Those regulators include the U.S. Environmental Protection Agency and the state’s oil and gas agency known as CalGEM.

Oil and gas companies and those providing direct support services locally employ 785 people, Oakley said. He estimated an additional 1,334 work in construction, engineering and other businesses that supply goods and services to producers and employees’ households.

The measures “would have a damaging effect to not only this industry but to the workers that depend on the industry,” he said.

It’s unclear whether the proposed measures would result in job losses, given that companies can still drill under the new rules and as many as 40% of the wells are already subject to the modern permit conditions.

Oil and gas workers constitute a tiny portion of the county’s 400,000-member labor force. But the local economy would take a hit if the industry’s high-paying jobs are lost, said Bruce Stenslie, president of the region’s Economic Development Collaborative.

Bennett, the former supervisor, argued that the county’s proposed measures go beyond what state regulations do by looking at the overall impact of a project on local communities.

What we know: Could 6 of 10 Ventura County residents have caught COVID-19?

VC-SAFE, the group of environmental and social justice activists campaigning for the measures, asks for a “yes” vote to safeguard the water supply and the health of communities near drilling sites.

Supporters cite a history of oil spills and research linking drilling to health risks such as respiratory problems and low birth weight in neighborhoods near operations.

“So many things are at stake for the future,” said Tomás Rebecchi, the campaign’s treasurer who lives near oil and gas developments along Highway 33.

It’s not a perfect fix, he said, noting that the measures won’t solve the problems of the past.

“It will correct it going forward and give us peace of mind,” said Rebecchi, who works for Food & Water Watch, a national environmental group that is fighting plans to upgrade a natural gas compressor station in Ventura.

VC-SAFE has raised about $615,000, including $460,000 from its biggest contributor Patagonia Inc., the outdoor gear and clothing company headquartered in Ventura.

No individuals are listed as contributors to the energy producers’ campaign.

A U.S. Geological Survey investigation that looked for evidence of oil contamination prompted county supervisors to temporarily ban certain drilling near an aquifer three years ago. Preliminary findings showed petroleum-related gasses of unknown origin in three irrigation wells, but final results of the study were inconclusive.

Janice Zinky, a supervising geologist with the State Water Board, said she understands the public’s concerns, but that the state has programs to protect groundwater near oil and gas production sites.

“We have taken it seriously,” Zinky said.

Proponents want environmental reviews because they may reveal unknown hazards.

The operations happen on private land without as much oversight, said Jeff Kuyper, executive director of Los Padres ForestWatch, a conservation group that has long advocated for updating the antiquated permits.

Other counties have faced similar issues with aged oil and gas permits, attempting a range of fixes.

Jones called measures A and B a “common-sense” way to ensure some level of environmental review.

Measures in a nutshell

Kathleen Wilson covers the Ventura County government, including the county health system, politics and social services. Reach her at kathleen.wilson@vcstar.com or 805-437-0271.