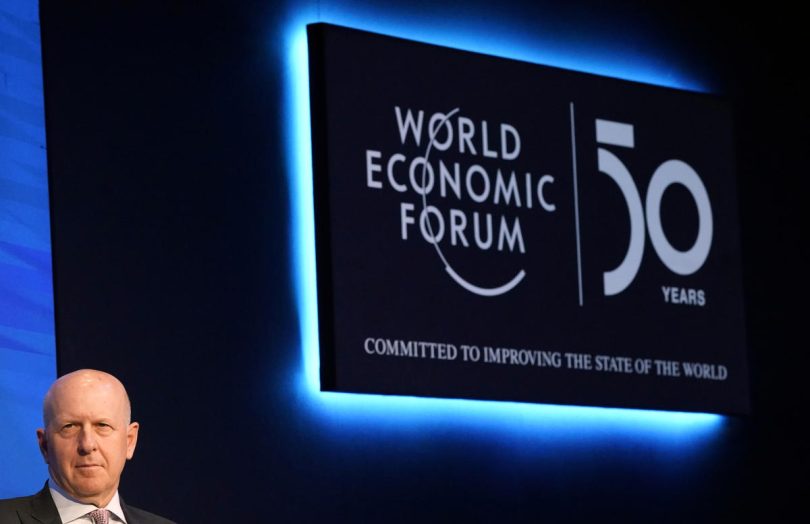 The global business elite will gather in the mountains of Davos, Switzerland this week for the World Economic Forum, where a slowing world economy, de-globalization, and war in Ukraine are set to dominate conversations as the world’s biggest stakeholders address the global outlook.

Back in the U.S., a holiday-shortened week will bring investors the government’s retail sales report, another notable inflation reading, and a big wave of corporate earnings results from giants like Goldman Sachs (GS), Netflix (NFLX), Procter & Gamble (PG), and American Airlines (AAL).

The U.S. stock and bond markets will be closed on Monday, January 16, in observation of Martin Luther King, Jr. Day.

Davos resumes its regularly scheduled programming this week for the first time since 2020, after last year saw a slimmed-down version of the normally-bustling January event held in May.

The prospect of a global recession, post-pandemic challenges, climate change, and the crisis in Eastern Europe are poised to top the agenda for the politicians, CEOs, and billionaires in attendance.

Despite concerns about the economy, U.S. stocks have started the year on an uptrend. On Friday, all three major averages closed out their second consecutive winning week.

The technology-heavy Nasdaq Composite saw an outsized gain of 4.8% for the week, while the S&P 500 and Dow Jones Industrial Average registered their best performances since November, logging weekly advances of 2.7% and 2%, respectively.

Fourth quarter earnings season will kick into high gear in the week ahead, however, and could put this rally to the test.

Wall Street’s big banks set the tone with lackluster results that also showed a stockpiling of rainy day funds in preparation for a potential downturn. And some CEOs warned issued warnings on the economy.

“We still do not know the ultimate effect of the headwinds coming from geopolitical tensions including the war in Ukraine, the vulnerable state of energy and food supplies, persistent inflation, and the unprecedented quantitative tightening,” JPMorgan’s (JPM) Jamie Dimon said during an earnings call.

Netflix results on Thursday will also be closely watched, with this quarterly update serving as a potential sign of things to come for the tech sector’s results, which are set to begin in earnest the following week.

Jack Janasiewicz, lead portfolio strategist at Natixis Investment Managers Solutions, said in a note that the market seems to be split into two binary outcomes – earnings remain largely unchanged or fall another 10-15% by the end of the year.

“While consensus views a 2023 recession as inevitable, we find ourselves contemplating the old adage: ‘Never bet against the US consumer,'” Janasiewicz said. “We would add another: ‘Never underestimate the resiliency and flexibility of corporate America.'”

“Corporates are aggressively cutting costs to preserve margins,” he added. “With cost pressures easing and demand proving resilient, might that be the missing piece to the earnings puzzle that leads to a better-than-expected earnings per share outcome?”

On the economic data front, monthly retail sales data from the U.S. Census Bureau will offer a gauge of how consumers fared during December’s all-important holiday shopping season. Economists surveyed by Bloomberg expect a -0.9% drop in the headline number.

Bank of America strategists attribute the anticipated slump to larger-than-usual holiday discounts, a continued rotation back to services, and a post-pandemic trend that has emerged for consumers to front-load holiday spending.

“These factors, along with the acceleration in spending into the new year and the resilience of lower-income consumers, suggest that investors should look through the expected weakness in December retail sales and wait to see the January data before drawing strong conclusions on the health of the U.S. consumer,” BofA said.

Elsewhere in economic releases, the producer price index (PPI) will give investors a look at inflation at the wholesale level after last week’s Consumer Price Index (CPI) came in at a cooler 6.5%.

Economists surveyed by Bloomberg expect headline PPI in December rose at an annual rate of 6.8%, down from 7.4% during the prior month. And PPI excluding food and energy increased at a 5.5% clip over the year, also decelerating from 6.2% in November.

Click here for the latest stock market news and in-depth analysis, including events that move stocks

Read the latest financial and business news from Yahoo Finance

Download the Yahoo Finance app for Apple or Android