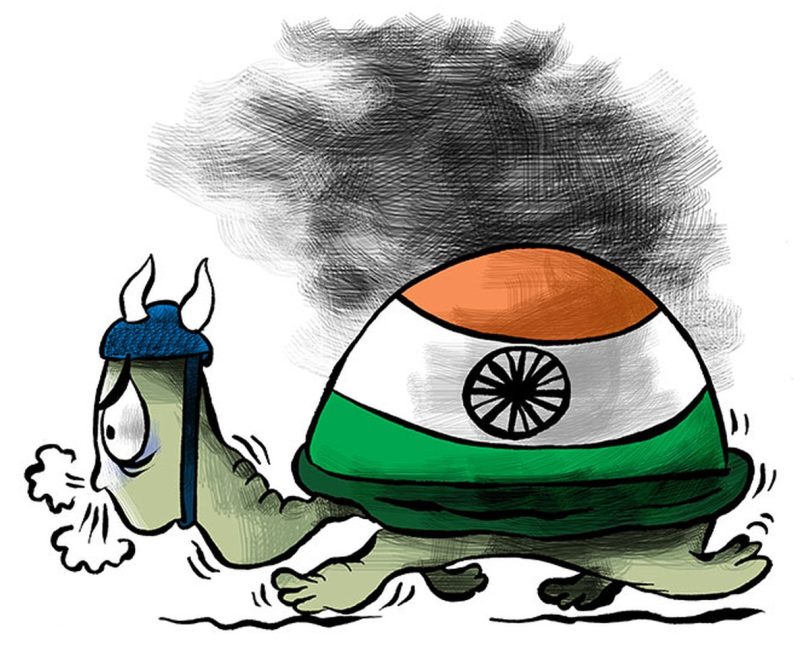 ‘The pipeline of new industrial projects is the best I’ve seen in the last 10 years, and it looks solid enough to sustain for at least a few quarters,’ points out Naushad Forbes, adding, ‘It is only when we get back to the same labour force participation we saw before Covid that the economy will have truly recovered.’

The lost Covid years (net growth of 1.5 per cent over two years) sets our $5 trillion goal back to 2026. That means growing 9 per cent each of the next four years.

We should grow between 6 and 7 per cent this year; projections for 2023 are lower.

In 1980, China and India were equally poor. China is now five times richer than we are, a result of growing 9 per cent, compared with our 6 per cent for 40 years. We need to catch up.

It is not enough to be the ‘world’s fastest-growing large economy’.

We are too poor a country for growth of 5 or 6 per cent, and must grow at 8-10 per cent annually for the next few decades.

GDP is calculated as the total of output, expenditure and incomes. Each is equivalent to the other (as Diane Coyle points out in her wonderful little book on GDP).

Of these, consumption has been the biggest contributor, accounting for over 60 per cent of India’s GDP (and GDP growth) in the last 30 years.

Growth in rural consumption was particularly buoyant, with millions becoming first-time consumers of everything from toothpaste to noodles to two-wheelers to cement.

Consumption collapsed during Covid years, for both goods and services. It bounced back strongly for goods, but unevenly.

Within categories, the more expensive items are growing fast. And for cheaper items, a higher proportion of sales is taking place in low-volume (and higher price to quantity) sachets.

2022 saw a dramatic recovery in services, with hotels and airlines coping with surging demand. (Returning from Delhi to Pune, an airline priced a seat on the basis of my permanently buying a piece of the aircraft, not just renting it for two hours).

There is apparently a pipeline of five million weddings flowing through the economy this winter season, prompting a witty friend to remark that we can look forward to a baby-boom in about a year.

Investment has long been a concern.

Savings and investment both grew strongly in the decade to 2012, reaching a peak of around 40 per cent, comparable to the best-performing countries in economic history.

Savings and investment then fell back and have remained subdued for 10 years.

The most common question I’ve been asked as an industrialist is when investment will recover.

I answer that adequate volume growth must first raise capacity utilisation enough for investment to follow. But this year seems to be pointing in a different direction.

In spite of stagnant consumption volumes, firms seem to be investing in new capacity.

Companies in the capital goods industry, which mainly supply to new projects and expansions, are seeing good volume growth for the first time in years.

I’ve struggled to understand where this could come from. Perhaps some of it is fresh investment by firms opting for the production-linked incentive scheme.

There has also been much talk of the need for international firms to diversify sourcing away from China.

My sense is that the China-plus-one strategy of firms might actually be a China-plus-point-one strategy. But given that China’s manufacturing output is eight times India’s, duplicating even a tenth of China’s capacity means almost doubling India’s.

Certainly, my friends in Indian industry, across FMCG, engineering, and chemicals sectors, report interest from multinationals in sourcing from India as never before.

Whatever the driver, will this growth in widespread capital investment sustain into next year and the future? I don’t know.

As of today, the pipeline of new industrial projects is the best I’ve seen in the last 10 years, and it looks solid enough to sustain for at least a few quarters.

Ultimately, only volume growth can sustain consumption growth, which in turn will sustain investment.

For consumption to grow in the long run, so must employment.

Most of India’s labour force is informally employed.

Mahesh Vyas of CMIE tells us that just 30 million of our 400-million workforce is in manufacturing, 60 million in retail and 30 million in personal non-professional services (security, maids, drivers, barbers, beauticians, delivery).

These services jobs are the sectors where our employment creation has been most vibrant in the last 30 years.

These largely informal jobs may not seem great jobs to us, but they are greatly prized relative to eking out a marginal existence in agriculture. They were also the hardest hit by Covid.

The recovery in service consumption this year is driving a recovery in employment: Mr Vyas says October finally saw overall employment return to its level of three years earlier.

Given that our population has grown by over 40 million in these three years, even with our low labour force participation ratio, we should have added 16 million jobs.

It is only when we get back to the same labour force participation we saw before Covid that the economy will have truly recovered.

That recovery would still leave us with deep employment problems: A workforce dominated by informal (over 80 per cent) employment, the lowest female labour force participation ratio (at 21 per cent, below even Saudi Arabia’s) of any country in the G20, and the lowest skilled workforce in the G20 (at 5 per cent, compared with 96 per cent in South Korea, 75 per cent in Germany and 52 per cent in the US).

Overtaking Germany and Japan, countries with a population 6 and 9 per cent of ours, respectively, will follow in a few years even if we continue muddling along.

But if we wish to match China, with the same population as us, these persistent problems will need to be addressed.

While we are rightly obsessed with a full and robust recovery from the downturn of the last two years, we must focus on actions to achieve our long-term potential.

Naushad Forbes is co-chairman, Forbes Marshall, past president, CII, chairman of the Centre for Technology Innovation and Economic Research, and Ananta Aspen Centre. His book, The Struggle and the Promise, was recently published by HarperCollins.