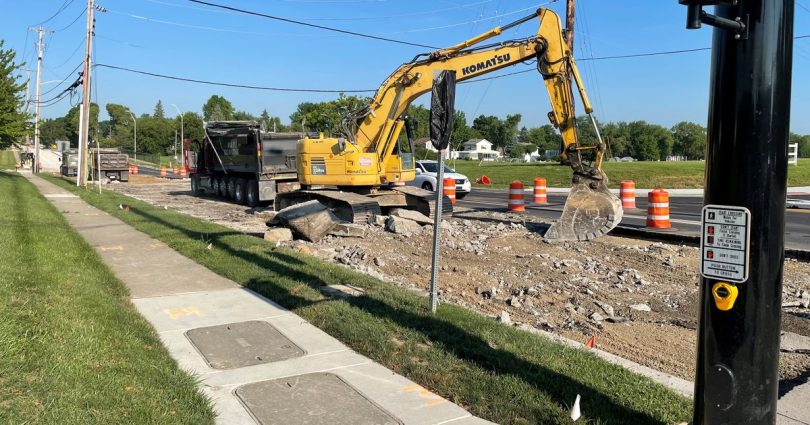 If inflation continues to run high into next year, officials say they likely will have to make some tough financial decisions, which could mean they repave fewer roads, make fewer improvements and hold onto capital equipment they want to replace.

“Virtually everyone is experiencing inflation and its adverse impacts on planned spending and projects,” said Monica Jones, Dayton’s acting director of procurement, management and budget.

Work to improve Forrer Boulevard from Woodman Drive to Smithville Road in Kettering continued Thursday as part of $2.473 million contract awarded to Barrett Paving Inc. The project, initially budgeted at $1.975 million, began late this spring, when this photo was taken. But Barrett had the lowest of four bids as costs for municipal capital improvement projects have increased sharply. NICK BLIZZARD/STAFF

Work to improve Forrer Boulevard from Woodman Drive to Smithville Road in Kettering continued Thursday as part of $2.473 million contract awarded to Barrett Paving Inc. The project, initially budgeted at $1.975 million, began late this spring, when this photo was taken. But Barrett had the lowest of four bids as costs for municipal capital improvement projects have increased sharply. NICK BLIZZARD/STAFF

U.S. inflation slowed last month, but it was still up 8.5% compared to a year earlier, according to the Consumer Price Index, published by the U.S. Bureau of Labor Statistics. Year-over-year, inflation had increased 9.1% in June, 8.5% in May, 8.2% in April and 8.6% in March.

In a Midwest region that includes Ohio and four other states, inflation increased 8.8% in July year-over-year. Before March, the last time the U.S. saw increases like this was in late 1981.

The Consumer Price Index for the local region had increased 9.8% in June and 8.8% in May, compared to a year before.

One of the effects of those pressures is the possibility that local public governments and organizations could delay or change high-profile projects to adjust to the current price environment.

The engineer’s office is responsible for maintaining roads and bridges in the county. Gruner said the 2022 projects were mostly bid out in December, when inflation wasn’t as bad.

But he said inflation will be a problem when he bids out projects for 2023.

“I can’t tell you right now what project we won’t be able to do, but we’ll have to drop a project,” Gruner said.

The city saw asphalt prices increase 25% this year, and Carrico said bids the city received for five of its six major road projects planned for this year came in over budget.

The lowest bid for a resurfacing project for a section of North Fairfield Road was 94% over budget, and the project was cancelled for 2022, she said.

That cancellation meant the city could use its $1.2 million budget to help offset the higher-than-expected costs for four other road projects, which had bids come in roughly 10% to 38% over their budgets, she said.

The city also expects that cost increases will cause fewer curb replacements this year.

Centerville is taking a second look at its planned Stubbs Park improvement project because architects originally anticipated it could cost a little more than $4 million, but the city received a single bid for the work that came in at $6.8 million, said Kate Bostdorff, the city’s communications director.

Centerville plans to rebid the project.

“If the market continues to play out like it has, we may have to reduce the scope of the project or push it further down the priority list to wait for the economy to stabilize,” she said.

The city has proposed making improvements to the park’s amphitheater and surrounding spaces. Centerville also expects to push back construction of a patio expansion at the Golf Club at Yankee Trace until 2023.

The city of Franklin had to scramble to figure out how to come come up with more than $732,000 in unanticipated costs to help cover the city’s local share of the Clear Creek Bike Path Connector.

The Ohio Department of Transportation notified Franklin officials earlier this year that the city would have to pay an additional $1.26 million on top of $494,843 in committed funds.

The project will still happen after ODOT allowed Franklin to pay its local share over two years.

The original proposal included plans to construct career technology classrooms at Wayne High School and permanent makerspace labs at each of the five elementary schools.

But as costs soared, board members decided the project should focus solely on the career technology addition, and they have scrapped the proposal for makerspaces, at least for now.

Fairborn City Schools is delaying construction of softball fields, baseball fields, tennis courts and a band turf practice field at its new high school site. The district expects to share a plan with the community in the near future about how it may try to address cost increases.

But Superintendent Gabe Lofton said it’s unclear if the district will be able to afford to do a stadium project.

“Those are definitely future projects that we’ll have to look at,” he said.

Miami Twp. may have to consider delaying the replacement of some of its vehicles or other equipment, said Christopher Snyder, township administrator.

Township projects are budgeted at least a year or two in advance so the impacts of higher costs often are delayed and short-term increases can be absorbed, he said.

But, he said, “Local governments generally don’t have the ability to quickly adjust revenue to make up for increased costs and so we must rely on reserves or reallocating funds away from long-term purchases.”

Dayton is delaying purchases, using alternative materials, adjusting the scope of projects and changing the timing of capital projects to adjust to cost increases, said Jones, with Dayton’s department of procurement, management and budget.

About 10 of Dayton’s construction projections in the first half of this year came in over the engineer’s cost estimates and needed to be re-bid, she said.

For instance, the city only received one bid to replace a roof at a water department facility, but that came in 40% higher than the engineer’s estimate, Jones said.

Dayton is revisiting and reevaluating many of its engineering cost estimates, Jones said, and the city will look for state and federal grant opportunities to help offset increased project costs to try to keep capital plans intact as much as possible.

“To date, no significant capital plans have been cancelled, but we are seeing delays to projects, once again due to inflation-related costs and supply chain issues,” Jones said. “In other instances, in lieu of cancelling a project, it may be scaled back or the scope revised.”

Like Dayton, other local communities also say they hope to obtain state and federal grant funding to help cope with higher prices.

Kettering likely will do resurfacing, concrete repairs and curb, sidewalk and driveway work in two large neighborhoods next year instead of three, officials said.

Leaders in the city of Troy said it’s possible that nonessential capital purchases may have to be cut back or deferred until 2024, said Patrick Titterington, Troy’s public service and safety director.

In addition to costing more, contracts also are taking longer to complete because of material delivery delays, and current projects need to be finished before future ones can begin, said Jill Rhoades, a city engineer with Troy.

Higher costs for goods could become the “new normal,” she said.

John Green, Tipp City’s finance director, said he expects inflation to slow in the next six to nine months, but he does not think that will mean prices will drop significantly.

“Even if inflation begins to moderate this year, I doubt that pricing will go back to historical levels,” Green said. “Thankfully we plan for these occasions and have funding available to meet our needs.”

But, he said, “While we do not expect prices to fall dramatically in the future, we do expect to see some of the market volatility go away.”