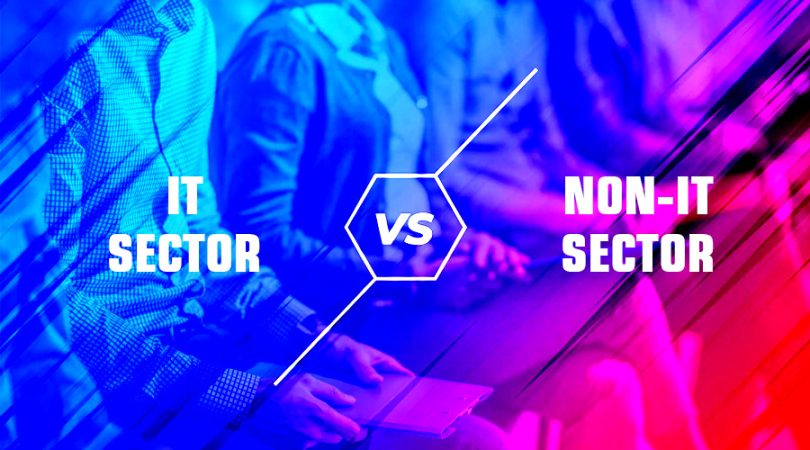 IT vs non-IT: These sectors have locked horns to be the best in the white-collar job market

IT vs non-IT, these sectors have locked horns to be the best in the white-collar job market in 2023. According to senior corporate leaders, as long as the global demand continues to be influenced, the present slowdown and caution in jobs in the IT sector, which has for years been the dominating recruiter in the white-collar job market, will probably continue in 2023.

Companies could adopt a more cautious approach in India’s white-collar job market in 2023 as recession worries deepen in advanced nations due to persistent geopolitical unrest, rising prices, and slow development. The non-IT sector, which is gaining from a rebound in domestic spending, is expected to continue recruiting in several areas.

While overall hiring activity has decreased due to macroeconomic headwinds and high inflation over the past four months, India’s white-collar job market has continued to be driven by industries like manufacturing, services, automotive, consumer, telecom, oil & energy, hospitality & tourism, and infrastructure.

According to data from LinkedIn and the top company job boards combined by specialized staffing firm Xpheno, the non-IT sector put out nearly 100,000 active openings in August, making up 37% of the total active demand (up from 66,000 in April at the start of the fiscal year). This was done despite a simultaneous recovery in consumption and growth in some of these sectors. Nevertheless, the statistics indicated that there were 260,000 open white-collar job openings overall in August, down from 270,000 in July and down 6% from a year earlier. The figures were in line with the low count from February 2021.

This is because the country’s largest employer, the IT sector, posted its lowest employment count in 15 months (down 14%) as a result of businesses being hesitant about hiring new employees due to growing labor costs and high inflation in important client regions. In the past six months, the volume and pace of recruiting across the whole IT sector, which includes services, products, and GICs (global in-house centers, or captives of global firms in India), have slowed.

Anil Ethanur, the cofounder of Xpheno, stated that “the IT sector looks to have hit the brakes following quarters of high volume and high-velocity recruiting.” He said, “The robust performance from non-tech industries that are seen constantly putting out active demand in the labor market this fiscal has more than made up for the reduction in activity from the tech sector.”

The optimism among the non-tech cohort, according to economists and professionals in the labor market, is mostly caused by favorable economic indicators including an increase in GST receipts and private sector capital spending as well as an anticipated recovery in rural consumption.

According to Madan Sabnavis, chief economist at Bank of Baroda, “These are all industries that have begun exhibiting signals of stronger growth, and now is the best moment for enterprises to employ in the white-collar category, looking at the manpower demand from a five-year perspective.”

“FMCG firms are optimistic about the upcoming quarter, and demand in rural areas is anticipated to increase. Financial services and infrastructure are performing well. Demand is anticipated to rise in the automotive industry as supply and chip issues are resolved” he said. According to Sabnavis, “the war in Ukraine had no significant effects, and commodity prices are declining internationally.” He also mentioned strong GST revenue and an increase in capital spending by the government.

According to Vimal Kejriwal, MD of KEC International, a division of the RPG Group, “the level of hiring we are doing in infrastructure is unparalleled with growth in CAPEX from the government and projects going up.”

The top positions in demand across non-tech sectors include those related to 5G in telecom, components, consumer electronics, and semiconductors in manufacturing, electric vehicles, engineering, and R&D (research & development) in the auto industry, sales, customer service, and operations in hospitality & tourism, branch operations, customer service, and analytics-related hiring in BFSI (or banking, financial services, and insurance).