The topmost challenge in engaging with the informal workforce is managing their wages as indicated by 45 percent of the employers, a new TeamLease Services report has said.

“The topmost challenge in engaging with the informal workforce is managing their wages as indicated by 45 percent of the employers,” as per a new TeamLease Services report ‘Reinventing business with workforce formalisation.’ This is followed by skill gaps, frequent absenteeism, recurrent hiring and training and high turnover.

On the other hand, the TeamLease survey also found that employers believe informal workers see an absence of social security as the most challenging aspect of being in the informal space.

“Despite having to put in long working hours, employers believe that wages for informal workers are mostly on the lower side. The other major challenges faced by informal workers, as per employers, are low wages and lack of leave and medical benefits,” the staffing firm’s report pointed out. 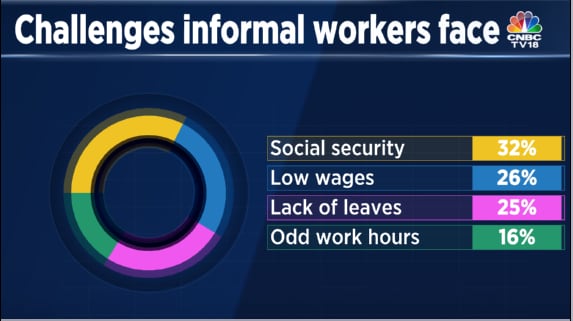 Balasubramanian A, Vice President and Business Head – Consumer and Healthcare, TeamLease Services, told CNBCTV18.com that many informal workers are hesitant to become part of the formal sector because of the ‘uncertainty’ factor. Since they’re unaware of the space, they’re reluctant to step in.

Meanwhile, even as employers are willing to formalise their informal workforce, the increased expense they need to incur and regulatory barriers make them hesitant.

Balasubramanian, however, pointed out that several of his clients are trying to work around the situation to ensure that net pay doesn’t change a lot. He said that additional elements, like a performance-based bonus, increments, etc., are adjusted so that employers can control the overall cost incurred by the company.

Also, across sectors like FMCG, FMCD and healthcare and pharmaceuticals, the majority of companies, about 56 percent, prioritise formalisation with third-party payroll.

“While 64 percent of companies have already initiated major steps, 67 percent plan to implement them within the year. Now, with conducive steps being taken towards simplifying labour laws under the new labour code, he added that formalisation is going to become a mandate rather than a choice”.

TeamLease believes technology, new business models, and staffing innovation are enablers of a transformation via formalisation. And so, it has introduced a framework called GAPS (Ghost employee elimination; Attrition reduction; Productivity boost with Tech; Statutory compliance) that provides a roadmap to formalisation success.

Seeing the increased intent to formalise, Balasubramanian said that formalisation will solve two problems immediately — ghost employee elimination ( removal of those on the wages list who either do not exist or are not employed in the position for which the payment is made) and compliance issues. The benefits of the other two, that are, attrition reduction and increased productivity, will be reaped over time, he added.

As per the report, 29 percent of employers in the FMCG, FMCD and healthcare and pharmaceuticals sectors wish to formalise the roles of sales executives, followed by electricians, community health workers, marketing executives and supply chain executives.