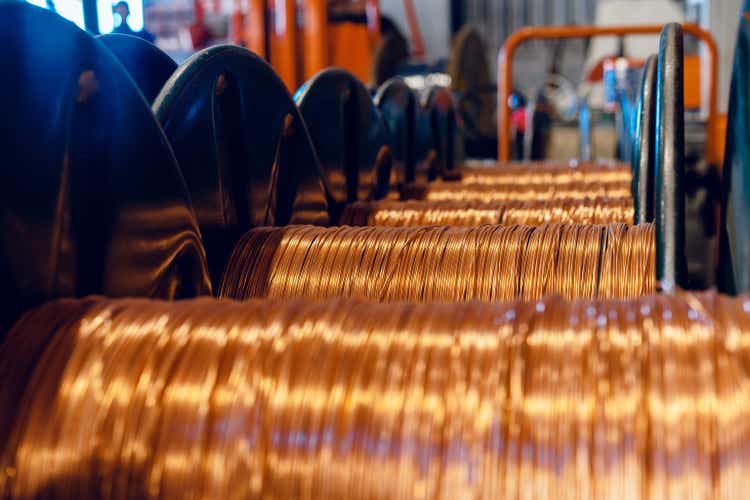 Analysts Predict Robust Consumption of Copper in the Next Decade

Copper is one of the most used base metals, which finds applications in various industrial sectors such as infrastructure, construction, communication, transportation and numerous technologies in heavy and light industries.

When it comes to copper, the first thought goes to its high electrical conductivity and therefore electrical cables and various electrical and electronic devices.

Demand for copper is expected to increase sharply in the next few years as electrification becomes more important in human activities. This process aims to replace most polluting activities with cleaner and more efficient ones. These are the activities of the ideal future world that are environmentally friendly in terms of CO2 and other greenhouse gases in the atmosphere.

Analysts predict copper demand will double from current levels in less than 13 years and is expected to reach 50 million tons not later than 2035. Or, as S&P Global Inc. (SPGI) clarifies to give a better idea of the magnitude of future demand, it will exceed the total red metal consumption that occurred over the past 120 years.

Far from satisfactory, the five largest copper exporters in the world, including Chile and Peru [the two world leaders], China, the Democratic Republic of the Congo and the United States of America, do not collectively make 13 million tons.

Robust demand versus lower supply is sure to cause the long-term trend in copper prices to rise steeply over the next several years. However, the upward trend will not develop steadily, but through ups and downs. The chart below illustrates HG1:COM Copper Futures over the past thirty years.

Because the base metal is traded on the financial futures markets, the retail investor may seek to profit from these markets or buy shares of US-listed equities in copper miners, possibly favoring those stocks that typically exhibit more than average sensitivity to changes in the commodity prices. This is because these copper stocks tend to outperform the commodity during a bullish sentiment for copper.

Hudbay Minerals Inc. Could Be a Good Investment Solution to Take Advantage of Higher Prices During the Next Copper Bull Market

As such, Hudbay Minerals Inc. (NYSE:HBM) could be a good choice for retail investors looking for US-listed copper mining stocks that exhibit high volatility to fluctuations in the copper price.

The chart below of Hudbay Minerals Inc. versus Copper Futures – Dec 22 (HGZ2) over the last five years attempts to determine if this copper mining stock is more volatile than the commodity.

The two bull markets just described may be enough to conclude that if the price of copper rises by $1, the share price of Hudbay Minerals will rise more strongly.

This is Hudbay Minerals’ volatility towards the commodity, the so-called beta for copper, which should therefore be greater than one.

Operations Are Highly Exposed to Copper, but Gold Also Matters

In addition to a higher copper price, Hudbay Minerals’ growth potential depends on the following characteristics of its mining operations, which are also included in the beta.

Hudbay Minerals engages in the exploitation of one of the world’s largest copper deposits, the Constancia Copper Mine in southern Peru with reserves that could exceed 440 million tons as exploration activities in the area continue.

Following Hudbay Minerals’ success in ramping up Peruvian operations over the past several years, the mine can deliver over 80% of the company’s total consolidated production of approximately 25,700 tons per quarter while improving reference throughput and copper grades.

From the operation of the Peruvian asset, Hudbay Minerals derives 50% of total consolidated revenue, which was approximately $415.5 million in the second quarter of 2022, or 9.7% sequentially or 2.8% YoY.

The production of other metals is expected to provide significant benefits to Hudbay Minerals’ economy over the years as revenues from these complementary copper businesses will help achieve the goal of lower operating costs per pound of copper going forward.

The remainder of the total consolidated copper is processed at the New Britannia mill facility in Manitoba, Canada, where the systematic achievement of higher-than-expected throughput rates has enhanced the prospects for Hudbay Minerals’ copper business.

Higher-than-expected throughput rates will be good for the production of copper as long as the company continues to engage in specific initiatives to improve throughput and metal recoveries.

While Manitoba is not as important as the Constancia mine from a copper perspective, there will be a lot of interest in pursuing more of these types of initiatives going forward as improving copper ore throughput is a big part of gold trading success for Hudbay Minerals. Gold sales volumes and recoveries are incidental to the copper operation.

Hudbay Minerals’ gold business in Manitoba accounts for nearly 20% of the miner’s total consolidated sales and doubles copper sales at the Canadian mine site.

Manitoba also sells silver and zinc, with these two accounting for approximately 1.5% and 18% of Hudbay Minerals’ consolidated total revenues, respectively.

Higher Borrowing Costs and Increased Inflation Will Not Jeopardize Growth

A successful bull market for copper must occur to realize the above growth potential of Hudbay Minerals Inc.

Unfortunately, there are currently no favorable conditions for a further rapid appreciation of copper on the spot price market.

The price of copper has fallen in recent weeks due to the appreciation of the US dollar against other world currencies and due to market instability caused by higher interest rates in the United States.

Higher borrowing costs in US dollar currency [as a result of the US Federal Reserve’s hawkish stance] mean that the funds required to buy copper in US dollars are more expensive than they used to be if borrowed. This reflects lower demand for red metal.

Additionally, fears of a recession following the US Federal Reserve’s interest rate hike to combat galloping inflation are leading to a drop in copper demand. A sharp slowdown in economic activity will lead to a drop in investment and consumption, and with it a deterioration in the conditions of the industries in which the metal is widely used. In addition, many jobs could be lost, leading to a lower propensity of households to consume various items, including electrical and electronic equipment, which will translate into lower copper demand.

Of course, spot markets are highly speculative, so the mere fear that future copper demand will be impacted by the potential recession is enough to immediately cause a significant drop in the commodity price.

A lower copper price could seriously jeopardize the future of many copper players unless their financial conditions are sound. However, over time, this will be an advantage for Hudbay Minerals Inc. which instead is in a healthy financial position as reflected in the following indices from the balance sheet.

As of June 30, 2022, the balance sheet had available liquidity close to $260 million, which was 4.5 times lower than the total debt of approximately $1.2 billion.

That’s a huge margin, but shareholders don’t have to worry about it because the Interest Coverage Ratio — which is a measure of the economic viability of the debt burden — has a reading of 7.6 [ideally, a good reading should be at least 2], which is suggesting that the company has no problem paying the interest cost on the outstanding debt.

A reasonably sound financial position will allow Hudbay Minerals to proceed with its projects without heartache.

In both the first and second phases, total all-in-sustaining costs would remain well below the current level of $1.93/lb, requiring a sacrifice of $1.44/lb. initially and $1.42/lb. subsequently.

Investors should be aware that this information is indicative only as it is based on inferred resources which have a much lower likelihood of being converted to reserves compared to measured and indicated resources.

The Near Future Could Unfold Differently than Commonly Expected

But it is not said that the recession will follow the tightening of monetary policy, assuming that the Federal Reserve wants to give this as a signal to consumers and producers. Perhaps some kind of economic slowdown is enough to provide clear indications that inflation is on track to return to the 2% target. This means that the US Federal Reserve will end its aggressive rate hike policy earlier than expected, with positive implications for copper demand and the price.

Certainly, pent-up demand for copper is emerging under pressure from the strong US dollar and fears of an economic recession, which will trigger a strong upside effect on copper prices once the US Federal Reserve eases monetary tightening.

Should this scenario materialize, not only the price of copper but also the stock price of Hudbay Minerals Inc. will rise and its shareholders will enjoy the high beta for copper.

However, now is the time to build future success, and while the bottom of the cycle may not yet be in, the opportunity to own this stock should be evaluated well before the next bull market.

The Stock Valuation and Analysts’ Recommendations and Price Target

It is also well below the long-term trend of the 200-day simple moving average of $5.95, which supports the thesis that the stock is cheap as it holds amazing upside growth potential that could show up once copper starts moving higher again.

Hudbay Minerals’ 14-day relative strength indicator of 46.10 suggests that the stock price may slide further down from current levels amid the pressure of the current macroeconomic and geopolitical headwinds on copper prices.

Although current valuations are cheap compared to recent levels, they should not prompt a buy position now, contrary to the recommendation of fifteen Wall Street analysts.

The analysts have issued an average target price of $5.5, which represents a jump of 36.5% from Sept. 30’s closing price.

Conclusion – Good Copper Stock With Amazing Upside Potential, but the Price Environment Is Not Yet Favorable

If the copper price kicks in, Hudbay Minerals Inc. could grow very quickly by leveraging its strong business and solid balance sheet supporting the development of promising metals projects.

But the time to buy shares of Hudbay Minerals Inc. has not yet come, as copper may still be some time away from a new uptrend and as a result, the share price could still fall from its current level.