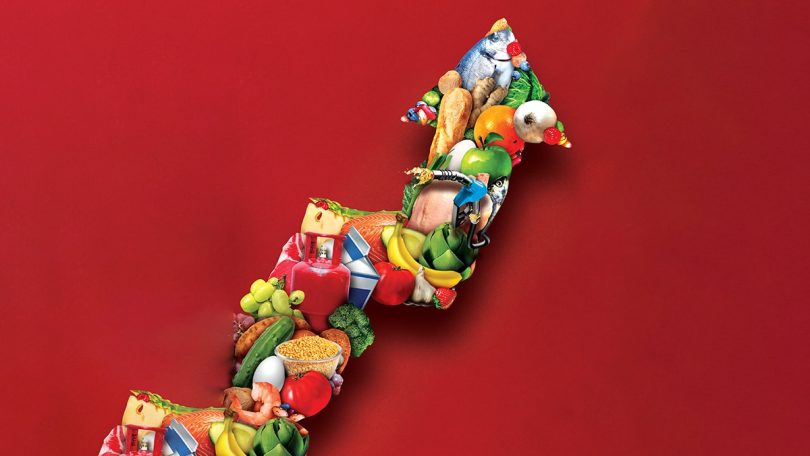 By MG Arun: As was widely expected, retail inflation measured by the Consumer Price Index (CPI) fell to a three-month low of 6.77 per cent for October, according to government data released on November 14. CPI inflation was 7.4 per cent in September. The cooling off in inflation came after all the components showed a lower inflation rate compared with September.

“The headline print was expected to moderate due to base effect and some sequential easing in cereals and pulses inflation. But vegetable inflation continued to soar as unseasonal rains in October hit production,” Dharmakirti Joshi, chief economist with Crisil, said in a note. Core inflation remains sticky at 6 per cent year on year. Its major components (clothing and footwear, recreation, personal care and effects) are up year on year, indicating that recovering demand (especially in the festival season) allowed producers to pass on higher input costs to selling prices, Joshi said. “Going forward, we expect inflation to moderate on a continuing base effect. We retain our CPI inflation forecast at 6.8 per cent for this fiscal compared with 5.5 per cent last year,” he added.

The question is how sustainable this cooling of prices will be. For instance, after dropping to 6.71 per cent in July, CPI inflation once again rose to 7 per cent for August, putting the Reserve Bank of India (RBI), which had brought in a slew of repo rate hikes to control price rises, under pressure. Inflation has remained much above the RBI’s target inflation upper limit of 6 per cent. Inflation has breached the 6 per cent mark for 10 months in a row, starting January, and that continues to be a worry for the central bank.

Meanwhile, rural India has witnessed more inflation as food prices are higher here and have a greater share in the basket. “The base effect was the main driver of the inflation rates,” said Madan Sabnavis, chief economist with Bank of Baroda.

At 7.04 per cent, however, food inflation is still relatively high and is being driven by higher prices of cereal and milk.

Lower stocks of cereals after the extension of the central food security scheme and lower procurement due to weather vagaries have pushed up domestic cereal prices in the last 2-3 months, apart from geopolitical factors, leading to cereal inflation of 12.08 per cent this October. This is, however, partly offset by the softness in prices of edible oil, pulses, and sugar. “Core inflation, nevertheless, continues to be high at 6.23 per cent vis a vis 6.33 per cent year on year, and sequentially higher by 0.6 per cent, indicating that price rises have got embedded in the economy,” Suman Chowdhury, chief analytical officer, AcuitÃ© Ratings & Research, said in a note.

Sabnavis notes that the state level variation in inflation is sharp. Telangana and Andhra Pradesh have very high inflation of over 8 per cent. States with above 7 per cent inflation are Madhya Pradesh, Tamil Nadu, Maharashtra and West Bengal. “We may expect this tendency to continue for the rest of the year as the CPI inflation numbers had started increasing since September last year. There are more threats on the food side as vegetable and cereal prices have increased and don’t show signs of moderating right now,” he said. This time, food products, clothing and fuel and light continue to have rates above 6 per cent.

With inflation remaining above the central bank’s target upper limit for three quarters (nine months) in a row, the RBI has had to give an explanation to the government. “..we do expect the RBI to continue to increase the repo rate, albeit by a smaller quantity of 25-35 bps in the coming policy to be in tune with what other central banks are doing,” Sabnavis added. On November 2, the US Federal Reserve announced its fourth consecutive 75 basis point interest rate hike, bringing the benchmark federal funds rate to the range of 3.75 per cent to 4 per cent. The Fed also hinted that it was in favour of over-tightening rather than under-tightening to rein in inflation.

On November 12, RBI governor Shaktikanta Das had said that he expected inflation print for October to be lower than 7 per cent on the back of measures to control inflation taken by the central bank and the government in the past few months. While the central bank had been raising key interest rates, the Centre had cut excise duty on petrol by Rs 8 per litre and on diesel by Rs 6 in May.