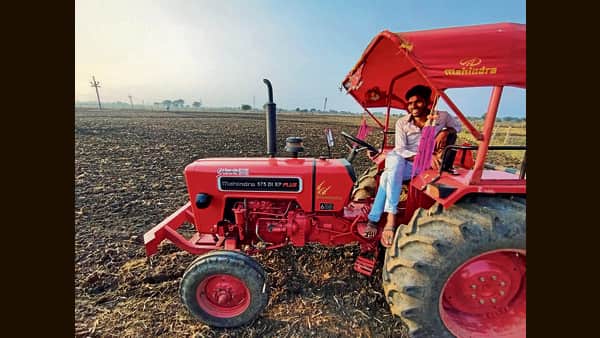 A few months back, Singh purchased a powerful 55 horse power (hp) tractor shelling out a staggering ₹7,70,000. “The 35 hp tractor, which I earlier had, was a 1998 model. It was unable to run the heavy implements used to prepare the soil for growing rice. So, I invested in a new machine,” Singh said.

Farming in a little over four acres of land in the agriculturally prosperous Vidisha district, Singh’s investment could well turn out to be a case of biting more than one can chew. Because it makes sense for a small farmer to rent a tractor instead of owning one. But Singh thinks he can recoup the investment by growing premium varieties of rice and by renting the machine to other growers.

The year began on a good note for Singh, which is what prompted him to take the plunge. With wholesale crop prices at multi-year highs, arranging funds was not difficult. The wheat he sold in May to government agencies at minimum support prices (MSP) took care of the down payment. Singh also got a discount of ₹1.6 lakh as exchange value on the 24-year-old tractor. After purchasing the new tractor, Singh leased three additional acres of land to grow rice.

As wholesale Basmati rice prices soared to ₹3,300 per quintal (pre-milling) by end November—about 20% higher than last year—the money Singh made from selling his October harvest was enough to pay off the half-yearly instalment on the tractor loan ( ₹85,000). Besides, Singh also rented out his new tractor for 150 hours earning more than ₹60,000 in net profits, after deducting fuel and labour costs.

“See, the money which I put in the new tractor is an investment which can help me grow… I have no other means to improve my situation,” Singh argued.

Why not spend a few thousands to get a new television or replace his two-decade old motorcycle? Because TV is a distraction and a smart phone is enough these days, Singh explained. “When the TV does not respond to my chantas (slaps), I just get under the blanket and fall asleep. But I do need a new bike. Perhaps I will have to get one soon.”

Singh’s decision to defer purchasing a bike and invest in a tractor is not a one-off case. Tractor sales touched record highs in the festive month of October—a silver lining for rural India—driven by higher crop prices, despite uneven rains in parts of the country during the Kharif crop season. Higher planting of winter crops like wheat and mustard—25% and 9% more, respectively, compared to last year (till 9 December)—also pushed sales.

Tractor sales have been robust compared to sales of entry level motorcycles and fast-moving consumer goods (FMCG). The two-wheeler market, considered to be a barometer of economic well-being of those at the bottom of the pyramid, witnessed the lowest sales in a decade in 2021-22, according to the Society of Indian Automobile Manufacturers. Despite a gradual revival, the number of entry level motorcycles sold during July-September (2022-23) was 35% lower than in 2018-19.

Similarly, volume growth in FMCG sales in rural markets were in the negative for the fifth straight quarter in September 2022, according to market research firm NielsenIQ.

The disparate trend is reflective of a growing chasm in rural areas.

Farm incomes have improved due to better crop prices, with wholesale cotton, cereals and oilseeds (rice, wheat, maize, soybean and mustard) prices being significantly higher than government announced MSPs. But a large section of the landless rural population is battling high food inflation coupled with falling earnings. Growth in rural wages adjusted for inflation has been in the negative since October last year (till September 2022). This has pushed a chunk of rural households to slash expenditure on discretionary items and delay purchases of big-ticket items like a motorcycle.

A brief conversation with Shyam Sevak Gurjar, a daily wage earner and neighbour of Vijay Singh, shows how contrasting their lives are. Gurjar earns about ₹250 in wages on days when he is lucky to find work. During peak months when labour demand for transplanting paddy or harvesting crops is high, he receives about ₹300 a day. The nominal wages moved sluggishly in the past few years while his grocery expenses shot up.

“I do not have money to repair my bike (which is more than 14 years old). How can I think of getting a new one?” Gurjar asks.

Singh and Gurjar are residents of Bagri village, located on the outskirts of Vidisha town, adjacent to a state highway lined with tractor showrooms. Rohit Lodhi, barely out of his teens, also a resident of Bagri, works as a mechanic at one of the service centres.

Lodhi considers himself lucky to have a regular job. Besides, he has earned some handsome commissions by referring farmers like Singh to the tractor dealer he works for. “In just Bagri alone, farmers have purchased at least 20 tractors this year. And I helped sell more than 10,” Lodhi said, proudly.

A day after Lodhi took this reporter around in Bagri, we bumped into each other at a restaurant named Village Deck, the best that a small town like Vidisha could offer. Lodhi was there with his family, spending some of his extra earnings. That’s a luxury someone like Gurjar cannot afford.

“The post-pandemic reverse migration to rural areas saw many youngsters returning to the farm. Part of expenses on social events like marriages were diverted to purchasing tractors. Also, since the last big jump in sales was between 2012-14, the replacement demand was high in recent years,” Sharma said, adding, “for most farmers, a tractor is not a cost but a profit centre.”

In comparison, the two-wheeler market had to deal with a host of challenges, Sharma said. Cost of acquiring a new bike went up by more than 40% in past four years due to changes in emission and safety norms and higher cost of steel. And unlike farm households, landless families had to grapple with low wages, job losses in the informal sector and a drop in remittance income.

“The year has been excellent for the industry. Sales are expected to grow by 5-6% (in 2022-23) on a high base (of 842,000) tractors sold last year. The industry could well see the highest ever sales this fiscal,” said Hemant Sikka, president of the farm equipment sector at Mahindra and Mahindra Ltd, India’s largest tractor maker with a 43% share of sales.

“The implement industry is seeing a high growth phase. Against the growth of 12% in tractors (April-October, 2022), Mahindra’s farm machinery business has grown by 39% year-on-year. We are aiming to grow the implements business by 10-fold over next five years,” Sikka added.

The boom is what prompted Aman Raghuvanshi and a few of his friends to start a small implement manufacturing business in Vidisha. Raghuvanshi has been working with the local dealer of John Deere, an American tractor manufacturer, since 2001 and is familiar with the cyclical aspect of the business.

For now, Raghuvanshi is looking forward to an all-expenses paid trip to Bali, Indonesia, with a few of his colleagues from the sales team in Vidisha—a reward from the manufacturer for the record sales last year.

Use of tractors in agriculture has increased as timely availability of labour is a problem for farmers. Besides, the government’s focus on infrastructure has pushed commercial sales higher (which account for 40% of annual sales),” said Rajat Gupta, founder of Tractor Junction, a digital marketplace for farm machinery.

According to Gupta, India’s is home to 8.2 million tractors, of which over 4 million were sold in the last five years. In the next few years, most of these tractors will enter the second-hand market. This prompted Gupta to open nine centres in three states to sell used tractors. Post-pandemic, monthly visitors to the Tractor Junction website shot up from 500,000 (March 2020) to 4 million in November 2022.

But are India’s farms over-populated with tractors, leading to a market saturation? Small and marginal sized farms (less than five acres) account for 85% of land holdings, yet 20 million land parcels are more than five acres in size, show data from the agriculture ministry. With domestic sales yet to touch a million units in a year, tractor companies see more room for growth.

“Since most farmers are growing multiple crops in a year, the replacement cycle for tractors shrunk from 10-11 years of use to 5-6 years now. As human labour is still extensively used on farms, there is immense opportunity to grow further,” said Raman Mittal, joint managing director at Sonalika International Tractors Ltd, another large tractor manufacturer.

The continuous growth in farm mechanization is also a result of numerous custom hiring centres (CHC) which were set up since 2014-15 under a central government scheme. Data from the agriculture ministry show that till December last year, more than 15,200 CHCs and 350 high-tech hubs were set up across India. Small farmers can hire tractors and farm implements from these centres at less than market rates.

“When I opened shop in 2017, farmers tried a rotavator (used for churning and aerating soil) for the first time. Now, most farmers in the village own one,” said Sachendra Raghuvanshi, who runs a farm machinery bank in Kodichar Kalan village in Vidisha. With rice farming fast replacing soybean in the district, Raghuvansi is now planning to purchase a paddy harvester which can replace manual harvesting.

Manufacturers, too, have jumped into the fray. For instance, Mahindra and Mahindra is offering Farming as a Service (FaaS) solutions under a new arm named Krish-e where growers can rent high-end farm machinery and access advisory and precision farming services.

On a sunny morning earlier this month, the field staff of Krish-e was explaining to 31-year-old Akhilendra Singh how to use a rotavator for best results. Singh, who has been trying for a government job for several years is keen to pursue farming as a career. In October, he purchased a 57 hp tractor replacing an older 45 hp machine.

“I am planning to lease 15 acres of land to grow more crops. Purchasing the new tractor was the first step. Next is to make it earn for me,” he said.