Oil and gas companies eager to score new acres of federal lands and waters for exploration and production may find their options limited or less attractive than they’d hoped in 2023, even as a new law will compel the Biden administration to proceed with oil and gas leasing activity.

Industry observers flagged the US Interior Department’s onshore and offshore leasing program as one area where President Joe Biden could continue to flex his climate change mitigation muscle with little to no impunity.

Although the courts dashed Biden’s effort to prohibit the issuance of new federal leases, and the Inflation Reduction Act tied oil and gas leasing to certain renewable energy development, Interior has retained a considerable amount of discretion to determine the amount and quality of acreage offered in lease sales.

The administration already appears to be leaning in that direction as updated guidance from the Bureau of Land Management tightens terms for onshore leasing. In addition to new instructions for abiding by leasing provisions in the IRA, the guidance also sets out some seemingly discretionary new protocols governing how parcels for lease will be selected and the duration of approved applications for permits to drill.

“There is nothing really to stop them from complying with the letter of the law by offering a modest amount of acreage in areas that they know no one really wants to buy,” Glenn Schwartz, director of energy policy at Rapidan Energy, said in an interview. “That is fully within their discretion to do something like that, and there’s not much industry can do to really override that in any way.” 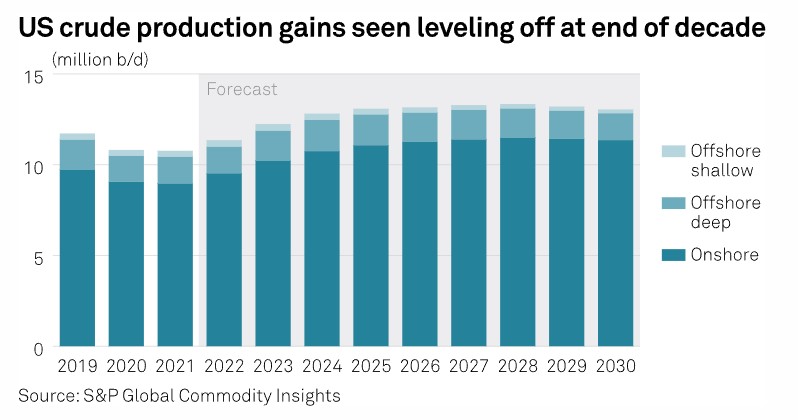 Schwartz said the IRA’s onshore leasing requirements set “a relatively low floor” that could easily be hit. And with companies since 2009 having annually only put in bids for an average of 1.7 million offshore acres, or about 2%-3% of the acreage offered for leasing, “it’s not tough to offer 60 million acres without many concessions to the oil and gas sector,” he said.

Schwartz added that “Biden has a little bit more wiggle room to limit federal leasing” as action here does not have an immediate impact on oil supplies or prices at the pump. Most onshore plays require a year or two before their production volumes would make a dent in gasoline prices, and drilling offshore would take even longer.

S&P Global Commodity Insights Analytics said US rigs and frack crews returned to pre-pandemic levels in 2022, with private operators driving US oil supply growth. It expects US crude production to grow in 2023, but that upside will be limited by ongoing capital discipline from public operators, supply chain issues, and inflation.

While limits on offshore leasing could curb US oil production growth potential by a couple of million barrels a day, “the US is going to be a major producer no matter what over the next three to five years,” said Ed Morse, Citi’s global head of commodities research. And producers already have enough onshore leases to continue developing over a long enough period of time for production to continue to grow, although the speed of production growth could take a hit, he said in an interview.

Industry observers saw little recourse to prevent the administration from taking such steps if it so chooses in 2023.

They predicted that Republicans would blast Biden’s policies as the cause of high energy prices, but suggested that the lack of a red wave during midterm elections demonstrated that such arguments have failed to resonate.

With Republicans taking control of the House, that avenue of attack is still expected to continue but is not seen as having any meaningful impact on policy. And attempts to attach policy riders to must-pass legislation or advance standalone bills to further tie the administration’s hands on leasing have little chance of passing the Senate, which retained its Democratic majority.

The administration, however, has pushed back on claims that it is working to block or otherwise impede leasing and drilling activity.

Interior Deputy Secretary Tommy Beaudreau recently told lawmakers that the department was going through “a period of adjustment to comply with the law,” but was moving forward with leasing activities, both onshore and offshore.

Interior is already planning two new onshore oil and gas lease sales to be held in the second quarter of 2023 for parcels in Kansas, New Mexico, and Wyoming, and Beaudreau assured that work was progressing towards finalizing a new five-year plan for offshore leasing.

Although capital discipline will continue to factor into investment decisions in 2023, private companies not beholden to shareholders are looking more eagerly at prospects for new drilling opportunities in the US because “this is the shortest cycle of oil in the world,” Morse said, referring to taking “the shortest amount of time from a decision to drill to an opportunity to produce to get it out of the ground.”

With global oil demand growth expected to start declining, “the rational perspective appears to be if you think that oil is going to get stranded, then produce as much as you can as fast as you can” to monetize those assets sooner than later, he said. “The short cycle nature of [oil in the US] at these prices … makes it a safer and more logical investment decision than investing in some other environment.” As such, Morse expects a considerable amount of capital spending increases in 2023 from major oil players to come to the US.

The end result, she said, could be “less oil production from US domestic companies overall.”
Source: Platts