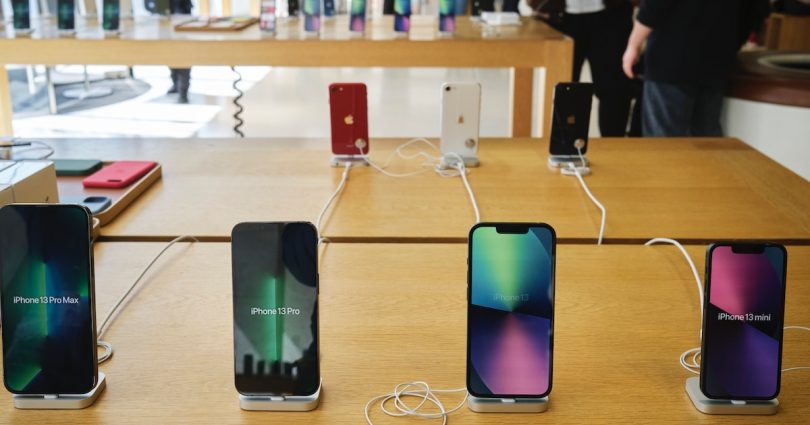 Apple is hosting its annual fall keynote on Wednesday, Sept. 7, and you know what that means — a brand new iPhone model with noteworthy features and perks is right around the corner. As iPhone users gear up for the exciting event, fans are eager to see if the upcoming iPhone 14 will be the first model to adopt a USB-C charger, or if the company will stick with its classic Lightning cord design for another year. If you’ve been wondering if the iPhone 14 will have a USB-C port, I hate to tell you the reports don’t look promising. Here’s the deal with the dream feature Apple stans wish would arrive.

The annual event goes down on Wednesday at 10 a.m. PT in Cupertino, California, and it will feature the launch of the highly anticipated iPhone 14, iPhone 14 Max, iPhone 14 Pro, and the iPhone 14 Pro Max (presumed names, of course). The new models are expected to provide users with longer battery life, higher quality photos, and will even be available in a stunning lavender color, per Tom’s Guide. In terms of iPhone upgrades, these are all usually pretty standard, but the potential feature that has everyone talking is the possibility of a USB-C port for charging in place of Apple’s signature Lightning port. Though the switch would be a big change, you might not want to get your hopes too high just yet, because it looks like the swap won’t be taking place for at least another year.

According to MacRumors, the iPhone 14 will likely come with its usual Lightning cord charging port (and Lightning to USB-C charging cord) which means fans probably won’t see a USB-C-friendly iPhone model until 2023 — but even that isn’t a guarantee. I know, I know, it’s a bummer, but the switch to a USB-C port could be in your very near future. IYDK, European Union lawmakers voted in favor of implementing a common charging standard across all electronics on June 7, 2022, and have given manufacturers until 2024 to update their devices accordingly — which means if Apple wants to sell iPhones in Europe in 2024, it’ll need a USB-C charging port.

The vote isn’t the only reason why fans hoped to see the USB-C on the iPhone 14. Apple analyst Ming-Chi Kuo shared the possibility of an iPhone with a USB-C port via a series of tweets in May 2022, though the expert also projected the first model with the new port wouldn’t hit the market until 2023. “It’s expected to see existing USB-C-related suppliers of Apple’s ecosystem (e.g., IC controller, connector) become the market’s focus in the next 1-2 years, thanks to vast orders from iPhones and accessories’ adoption of USB-C ports,” said Kuo in a May 2022 tweet. That same month, Bloomberg tech reporter Mark Gurman echoed this statement and shared that Apple is testing USB-C equipped iPhones, before reporting that the change wouldn’t take place until “2023 at the earliest.”

As for why the company is making the change (besides the European Union mandate, of course), there are some benefits that come with having a USB-C port. While Lightning ports can only be found in Apple products, USB-C ports are much more universally accepted, and therefore will be compatible with other devices like laptops and tablets. Ming-Chi Kuo also shared that the transfer to USB-C could see an improvement in iPhone’s “transfer and charging speed in hardware designs,” although the details of the improvements will depend on “iOS support.”

Though it seems like it’s all but confirmed that the iPhone 14 will come equipped with a Lightning port instead of a USB-C port, the only way to know for sure is to tune into the Sept. 7 event to see what Apple *actually* has in store.

Be the first to know what’s trending, straight from Elite Daily