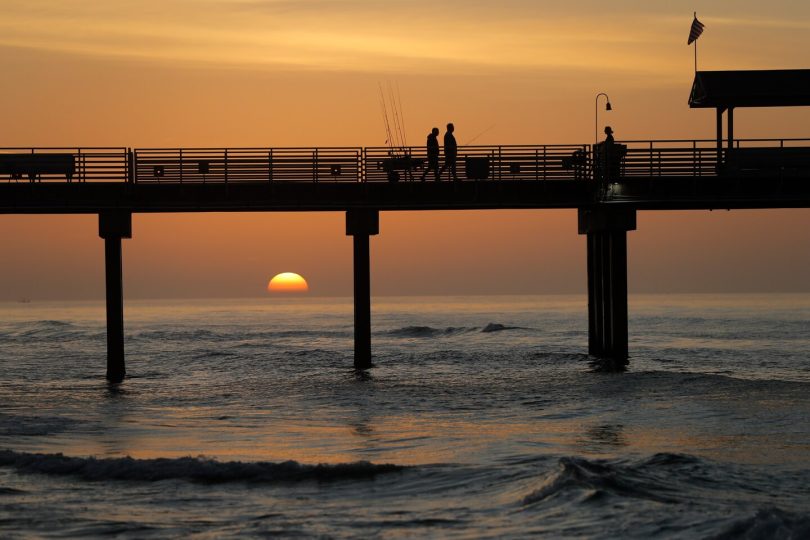 Good morning and welcome to The Climate 202! Are you a congressional staffer who peacefully protested inside the office of Senate Majority Leader Charles E. Schumer (D-N.Y.) yesterday? We want to hear from you! Email maxine.joselow@washpost.com.

Wind energy in the Gulf gets an unlikely fan: The oil industry

Support for President Biden‘s plan to open up the Gulf of Mexico to offshore wind development is coming from a surprising place: the oil and gas industry in the region.

The fossil fuel industry has loudly criticized many of Biden’s climate and energy policies, including his plan for offshore oil and gas drilling in federal waters over the next five years. But the sector sees an opportunity for workers with experience on offshore drilling rigs to transfer their skills to offshore wind farms, according to interviews with industry officials.

“We’re all for wind energy in the Gulf,” said Mike Moncla, president of the Louisiana Oil and Gas Association, a trade association representing more than 1,100 independent producers and service companies in the state.

Daniel Hogan, president and chief operating officer of Werrus AquaMarine, which owns four oil and gas blocks in the Gulf of Mexico, agreed.

“In the oil and gas business, we do a lot of things that are very similar to what can be done in the offshore wind business,” said Hogan, who recently launched Southern Wind Offshore, which has bid for blocks in Louisiana state waters where it hopes to erect wind turbines.

Biden announced the plan to open up more than 700,000 acres in the Gulf to commercial wind farms during a speech last week in Somerset, Mass.

Blown away by similarities

Hogan said he sees the following similarities between working on an offshore drilling rig and an offshore wind farm:

Erik Milito, president of the National Ocean Industries Association, a trade group that represents both the offshore oil and wind industries, cited even more overlapping roles.

“Steel fabricators, heavy lift vessel operators, marine construction firms, subsea engineers, seismic surveyors, and a host of other jobs and businesses that are integral to Gulf of Mexico oil and gas development are also building out American offshore wind,” Milito said in an email. “There is a reason the first U.S.-built offshore wind substation is being constructed in Ingleside, Texas.”

Bipartisan backing on the Hill

Far from the Gulf, lawmakers on Capitol Hill have voiced bipartisan backing for offshore wind development in the region.

In 2019, Sens. Edward J. Markey (D-Mass.) and Bill Cassidy (R-La.) sent a letter to then-Interior Secretary David Bernhardt expressing support for not only the Vineyard Wind project off the coast of Massachusetts, but also possible future offshore wind projects in the Gulf.

“Louisiana and Gulf Coast companies that have decades of experience working in the Gulf of Mexico are eager to make needed investments to support this project and future offshore wind energy projects,” the senators wrote, according to a copy of the letter obtained via a Freedom of Information Act request by the Union of Concerned Scientists, an environmental group.

“The senator has always taken an all-of-the-above approach to energy,” Andrews said in an email. “While this can include supporting certain reliable wind energy options, the most important thing this administration can do right now to lower inflation and support jobs is tap Louisiana’s robust supplies of natural gas and oil. As long as the president wages war on the most reliable energy sources our country has to offer, Americans and Louisianians will suffer.”

Six House staffers were arrested by U.S. Capitol Police on Monday for refusing to leave the office of Senate Majority Leader Charles E. Schumer (D-N.Y.), where they urged him to continue negotiations on a climate spending package that has been all but killed by Sen. Joe Manchin III (D-W.Va.), Jacob Knutson reports for Axios.

The peaceful protest was unusual because congressional aides typically remain out of the public eye. It came after more than 200 staffers anonymously signed a letter this month urging their bosses to take swift action on climate legislation.

Omar wrote on Twitter that she was “proud” of the staffers, while Khanna tweeted that he stood “in solidarity” with them.

Schumer’s office did not immediately respond to a request for comment, but he previously said he wants to continue pursuing climate legislation, including potentially through a second round of budget reconciliation this fall.

Right now, we Hill staffers are peacefully protesting Dem leaders INSIDE. To my knowledge, this has never been done.

We’ve also never seen climate catastrophe, so we’re meeting the moment. Follow along as we fight with everything we have to jumpstart climate negotiations. pic.twitter.com/PwuWVFQoED

The Energy Department on Monday announced that 146 programs will support President Biden‘s Justice40 Initiative, which seeks to deliver at least 40 percent of the benefits of federal climate-related investments to disadvantaged communities.

The covered programs include:

Many of Energy’s environmental justice efforts are being led by Shalanda Baker, whom the Senate recently confirmed to lead the agency’s Office of Minority Economic Impact.

“We have millions of people around the country who have been suffering from an energy system that has been harming them,” Baker said in an interview with The Climate 202 on Monday. “And we now have an extraordinary opportunity to do something that has never been done before, and to deliver on a promise that the president made on Day One.”

Climate change is posing an increased threat to the country’s treasured national parks as events such as wildfires, torrential rainfall and rising temperatures occur more frequently and intensely. According to a recent study, 223 national parks — more than half of all parks in the Lower 48 — are at risk, Salwan Georges, Julie Vitkovskaya and Joshua Partlow report for The Post.

In June, historic floods at Yellowstone National Park swept away a key road, cutting off the town of Gardiner, Mont., from critical infrastructure, contaminating water supplies and restricting access to tourism dollars just as the summer season began. It could take three to five years to rebuild the roadway that connects the town to the northern entrance of the park, costing roughly $1 billion.

Meanwhile, the Oak Fire — which has been raging near Yosemite National Park since Friday amid hot and dry conditions — quickly spread over more than 16,700 acres by Monday morning, becoming California’s largest blaze so far this season, Paulina Villegas reports for The Post. It has already threatened thousands of structures and put about 3,000 people under evacuation orders.

During the second quarter of this year, the U.S. clean energy industry saw a 55 percent drop in project installations compared with the same period in 2021, according to a quarterly market report released Tuesday by the American Clean Power Association, a trade group.

The decline marks the lowest quarter for clean energy capacity additions since the third quarter of 2019. It comes amid market head winds such as supply chain issues, policy inaction and inflation.

“Congressional inaction and uncertainty on long-term tax policy, tariff and trade restrictions, and transmission constraints all impact the demand for clean energy at a time when we need to be rapidly scaling up development,” American Clean Power Association CEO Heather Zichal said in a statement.

Russian state-owned energy giant Gazprom on Monday said it will halve the amount of natural gas flowing through the Nord Stream 1 pipeline to Germany, which is still dependent on Russia for about a third of its supplies, worsening uncertainty among European nations trying to bolster energy supplies before winter, Loveday Morris reports for The Post.

By Wednesday, the main pipeline connecting Russia and Western Europe will operate at 20 percent of its capacity, down from 40 percent, because of issues with a turbine, according to Gazprom.

The cuts come after the pipeline’s recent shutdown for routine maintenance. Although Russia turned the tap back on as scheduled Thursday, German officials have accused Moscow of using the repairs as an excuse to squeeze an already vulnerable Europe, causing prices to soar and giving the country leverage against nations backing Ukraine in the war.