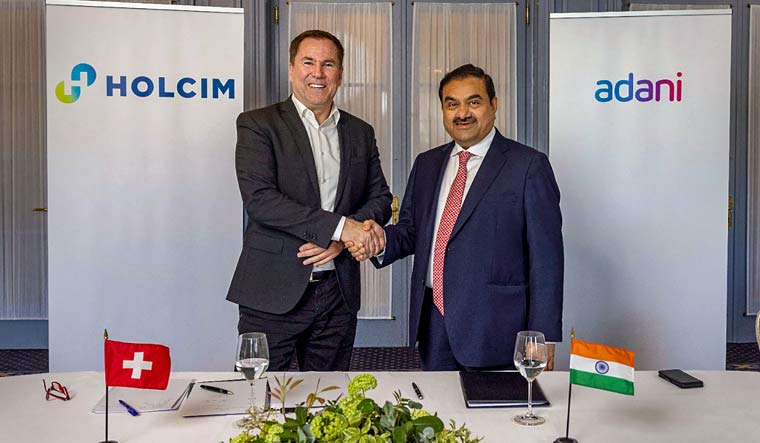 The Gautam Adani-led Adani Group has, over the years, emerged as the largest player in sectors ranging from airports to ports and logistics to solar energy. Now, Adani has set his sights on becoming the most profitable cement manufacturer in the country.

Switzerland-based Holcim, last week, completed the sale of cement companies ACC and Ambuja to Adani Group for $6.4 billion, in what is pegged to be India’s largest ever inbound mergers and acquisitions (M&A) deal in the infrastructure and materials space. Adani Group had no presence in the cement sector. The deal has catapulted the group to become the second largest cement maker in the country, behind Aditya Birla Group’s UltraTech. Gautam Adani said the group’s entry into the cement market fits well, given its presence in related areas like infrastructure and logistics.

“Cement is an attractive adjacency to our infrastructure business, especially the group’s ports and logistics business, green energy business and the e-commerce platform being developed. These adjacencies give us significant competitive advantage and put us in a position to gain unmatched scale,” Adani said in his address to the group’s employees.

India is the second largest producer of cement in the world. However, its per capita consumption of cement is just 250 kg, compared with China’s 1,600 kg, Adani pointed out, justifying the group’s foray into the sector.

“There is almost 7x headroom for growth. Furthermore, as several of the government programmes gather momentum, the long-term average growth in cement demand is expected to be 1.2 to 1.5 times the GDP. We anticipate growing at twice this number,” he said.

The group has made several acquisitions in the past across sectors, the learnings from which should help boost profits in the cement business, said Adani.

“Adani Group’s competencies in driving operational efficiencies is second to none and we will benefit from the learnings of the several acquisitions we have made over the past years. As a result, we expect significant margin expansion to become the most profitable cement manufacturer in the country,” he said.

Shares of other Adani Group companies too have rallied over the past year. While Adani Enterprises shares have jumped closed to 166 per cent, Adani Power has rallied 310 per cent. Similarly, Adani Green is up 107 per cent, Adani Transmission gained 133 per cent and Adani Ports is up over 28 per cent. Adani Total Gas has also risen 162 per cent.

The massive rally in Adani Group shares has lifted Adani’s fortunes. According to the Forbes Real-Time Billionaires List, Gautam Adani was the second richest in the world, with a net worth of $153.5 billion after markets closed on Monday. He was just ahead of Bernard Arnault, the chairman and co-founder of French luxury goods maker LVMH.

Elon Musk, the founder of Tesla and SpaceX, is the richest in the world with a net worth of $273.2 billion.

Over the past few years, Adani Group’s debt has risen amid its rapid business expansion raising concerns among some analysts. However, Adani said the group’s finances are “stronger than ever before” and they continue to raise billions of dollars from the international market and strategic partners to further accelerate growth.

“We are now the world’s largest solar power company and leading the greening of India. We are also leading the global green hydrogen story, having committed $70 billion to this business. We are the largest airports operator in the nation with 25 per cent of the passenger traffic and 40 per cent of our air cargo. We are the largest ports and logistics company with a 30 per cent national market share. We are India’s largest integrated energy player, spanning generation, transmission, distribution, LNG, LPG, city gas and piped gas distribution,” noted Adani.

He observed that each of these businesses was growing at a double-digit rate. The group has also won some of the largest road contracts in the country and is well on the way to become the largest player in the sector, he said.

The initial public offering of edible oil maker Adani Wilmar also made it the highest valued fast-moving consumer goods company in the country.

Adani said the group has declared its path forward in multiple new sectors, including data centres, aerospace and defence, metals and petrochemicals. The group also plans to build a superapp.